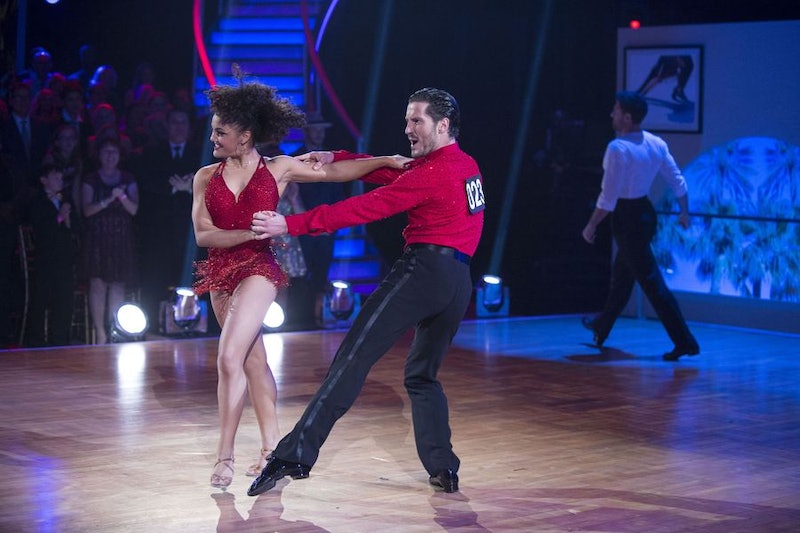 After Monday's finale, Dancing with the Stars fans will have to wait until 2017 to get their groove on again. It's been a wild few weeks for the constants of Season 23, and we're down to our four finalists. Laurie Hernandez and Val Chmerkovskiy, James Hinchcliffe and Sharna Burgess, and Calvin Johnson and Lindsay Arnold will compete for the coveted Mirrorball trophy in the finals. And, when a winner is picked from them, the show will take a final bow this year. So, when does Dancing with the Stars return for Season 24? The bad news is we don't know, but the good news is that ABC is pretty reliable when it comes to estimating when the seasons will take place — likely in mid-to-late March of 2017 (after The Bachelor wraps) with a cast announcement possibly happening around January.

It's a long time to wait until we know who will compete for next year's Mirrorball trophy, so why not take a look back at some of the more unforgettable moments from Season 23? Not only were there some surprising audience actions, there was also a proposal and a TV family reunion. It's safe to say that there were definitely more than a few things fans will remember from this season.

Who could forget the infamous incident where two protesters stormed the stage during Ryan Lochte's debut performance in the Season 23 premiere? Although the show handled the situation quickly, it was still a shocking moment.

Laurie Hernandez stole viewers' hearts in Rio, and then the pint-sized gymnast stole hearts again on the dance floor when she danced to Ducktales with partner Val Chmerkovskiy (who dressed as Scrooge) in Week 2.

If you're trying to impress Gordon Ramsey or Simon Cowell, you know you're going to get yelled at. But Gleb Savchenko got put in place when he tried to argue with Goodman about his critique of his samba during "eras" week — and fans won't soon forget Goodman's response.

The show's oldest contestant proved that age does matter when she didn't hide the tension that existed between her and her partner, Artem Chigvintsev, during a practice session. McCormick credited Dancing With The Stars for helping her speak up for herself.

These two rushed the stage for a different (and happier) reason, when Sasha Farber and Emma Slater got engaged during the show in the cutest proposal ever.

Jana Kramer has a lot to be proud of this season, but who could forget that perfect score she received from the judges during her sexy, sultry tango during Latin Night?

A Bromance For The Ages

James Hinchcliffe and Calvin Johnson, Jr. performed a super fun paso doble in Week 9 as "Team Last Men Standing." These guys are going out with a bang.

Obviously, Season 23 had some really fun highlights. Who knows what Season 24 will bring? Whatever it is, I know I can't wait for next year.