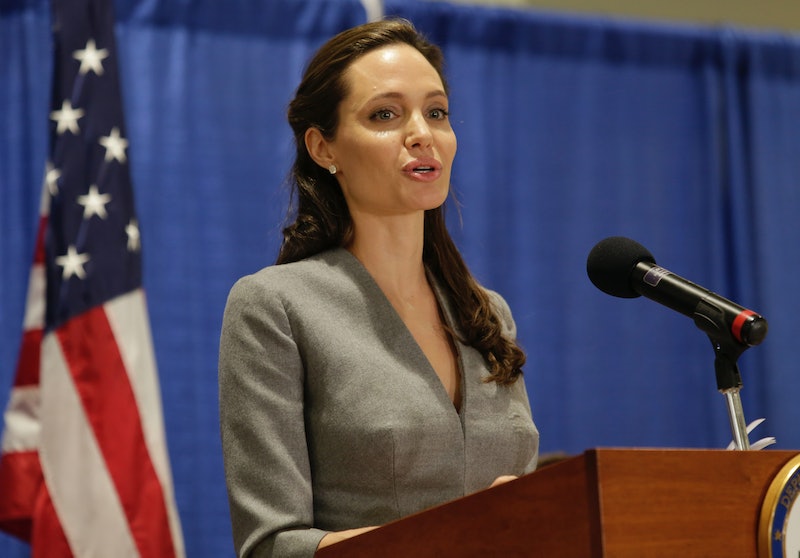 Now more than ever, it feels as though women in Hollywood are coming to the forefront of activism. From encouraging female voters, to standing up for human rights on a global scale, there are several A-list women whose engagement with politics is not only enviable, but has made a real difference, and encouraged more people to really engage with political issues. So which women in Hollywood became political activists? From Angelina Jolie, to Eva Longoria, these women are using their celebrity to raise awareness of much bigger issues.

When it comes to changing the perception of feminism, Emma Watson has been making strides and engaging with the public via her role as a UN Ambassador (and by leaving feminist books on the London subway). Several actors engaged with the 2016 Election in a meaningful way, with Gabourey Sidibe's "Girl, Just Vote" campaign being of particular note. While Susan Sarandon's political loyalties have been under scrutiny of late, especially following her heated Twitter exchange with Debra Messing, the actor has been publicly petitioning the Dakota Access Pipeline, at which Shailene Woodley was arrested for trespassing. Jennifer Aniston's interview with Gloria Steinem, regarding women's rights was so inspiring, as is her continued stance that a woman's worth should not be tied to her decision to have children or not.

As there are so many famous faces who have focussed their energies on a variety of political issues, it's incredibly tricky to narrow the list down. Here are just a few of the women in Hollywood whose political activism has had a meaningful impact.

In January 2013, Longoria told The Wall Street Journal, "Latinos aren't a drain on the economy or criminals crossing the border. Most are hardworking people who are America's emerging market." She's invested in issues of immigration, and was a co-chair on Barack Obama's re-election campaign back in 2012. Previously overlooked as simply a TV actor and model, Longoria has more than proven that she's politically engaged, and interested in supporting others.

Sarandon's online Twitter feud with Debra Messing didn't show her political standpoint in the best light, but the actor has a long history of engaging with political issues. She has been a UNICEF Goodwill Ambassador since 1999, and has long advocated the end of the death penalty, and campaigned on behalf of inmates on death row. Her recent campaigning against the Dakota Access Pipeline shows that the actor won't stop fighting for the issues she believes in.

The Harry Potter actor has become well-known for her political activities. Since 2014, Watson has been a UN Women Goodwill Ambassador, helping to launch the "#HeForShe" campaign, trying to destroy the misconception that all feminists hate men. Watson has quickly become a voice for feminism worldwide, and a passionate advocate for women's rights.

Fonda has never shied away from calling herself a feminist, and the actor continues to strive for equal rights and to empower women worldwide. In 2000, she founded the Jane Fonda Center at Emory University School of Medicine, which has a focus on educating teenagers about reproductive health.

In March 2016, Bush told HuffPost Live, "I still have people saying, ‘You know, you’re an actress, stay in your lane. You’re not allowed to be political.’” Luckily, that hasn't stopped her expressing her viewpoints, and her political interests are wide-ranging. She told HuffPo Live, "I see the effects of education access, environmental crisis, what’s happening in our political sphere and how it affects the developing world." Bush also uses social media to promote and fundraise on behalf of charities and campaigns.

Woodley is an environmental activist, and was arrested in Oct. 2016 for criminal trespassing, while campaigning against the Dakota Access Pipeline. She uses social media to publicize the issues she supports.

In 2016, Sidibe was featured in a video directed by Precious director Lisa Cortés called “Girl, Just Vote,” designed to encourage young voters to take the opportunity to vote for a candidate. The actor also spoke at an event in Nov. 2016, on behalf of Stanford victim Emily Doe, standing up for survivors of sexual assault.

Holland has been a longtime supporter of charity Aid for AIDS, and was awarded their first ever Celebrity Trailblazer Award in 2011 for her long-standing support to the charity, and for her promotion of social justice in general.

Jolie has been working with the United Nations High Commissioner for Refugees since 2001, and in 2012 became a Special Envoy to the High Commissioner, a role invented just for the actor to reflect her unique work. Jolie supports a plethora of humanitarian issues worldwide, including women's rights, child immigration, conservation, and education.

In an interview on The Today Show in August 2014, Aniston said, "I've birthed a lot of things and feel like I've mothered many things, and I don't think it's fair to put that pressure on people." Alongside interviewing Gloria Steinem, and boldly labeling herself a feminist, Aniston has explicitly countered the idea that women are only complete if they're mothers. As she said on The Today Show, "I don't have this sort of checklist of things that have to be done, and if they're not checked, then I've failed some part of my feminism or my value as a woman because I haven't birthed a child."

Davis is the ambassador for Hunger Is, a charity that aims to eradicate child hunger in America. In a video recorded for the campaign, Davis said, "Growing up, I was among the 1 in 5 American kids who struggled with hunger." The actor hopes that sharing her personal experiences will impact on child poverty, and help those who don't have the food that they need.

This list is by no means exhaustive, and showcases just some of the women in Hollywood who have committed their time, energy, and influence to helping others.