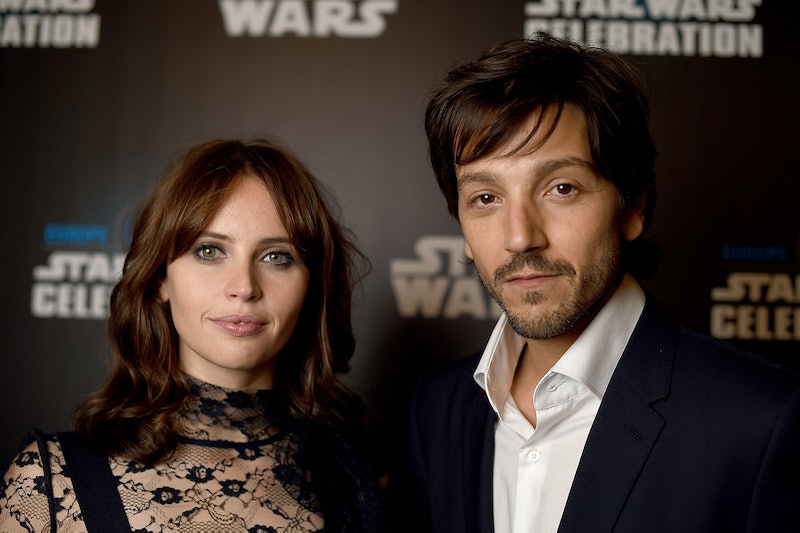 If there's one aspect rightfully gaining attention ahead of the movie's release, it's Rogue One 's diverse cast of characters led by a young woman — Jyn Erso, played by Felicity Jones. Rogue One's focus on unity through the diversity of its cast is precisely what makes it perfect for 2016 audiences; at least, that's how Diego Luna, who plays Captain Cassian Andor, feels about this upcoming Star Wars prequel. During a live Q&A with the Rogue One cast, Luna discussed how the film is relevant to modern audiences and which themes are especially accessible.

When asked whether Rogue One was "as timely as it is entertaining," Luna responded:

"I think so, yeah. I think [Rogue One] sends a clear message that people who are very different from each other, that apparently have nothing in common, can set their differences aside to work together and achieve great things. It's a great message for the world we're living in. Let's celebrate our differences and understand that that makes us richer ... and stronger."

His response received — and rightfully so — a hearty round of applause because, frankly, he hit the nail on the head. Star Wars has often been a franchise centered on the concept of how a ragtag team can vanquish a well-organized, menacing entity. Star Wars: The Force Awakens subtly changed the game by bringing together a noticeably racially diverse team onscreen that was just as skilled as those older generations. This low-key bit of casting helped make the film more accessible to audience. To see Finn onscreen, the first visibly black Stormtrooper in the franchise's history, kick ass alongside Rey was incredibly exciting.

Now, Rogue One is building on the momentum of The Force Awakens by actively bringing together a core cast that is more racially diverse than any previous Star Wars installment. In doing so, the film puts an emphasis on the ability to unite for a common good regardless of race, and puts an even bigger emphasis on the skills each character brings to the team rather than focusing on their racial background. That is the driving message of Rogue One and, for Luna, that should be the key emotional entry point for audiences. It's not about separating yourself from those who are different from you; it's about uniting and utilizing those differences to create something great.