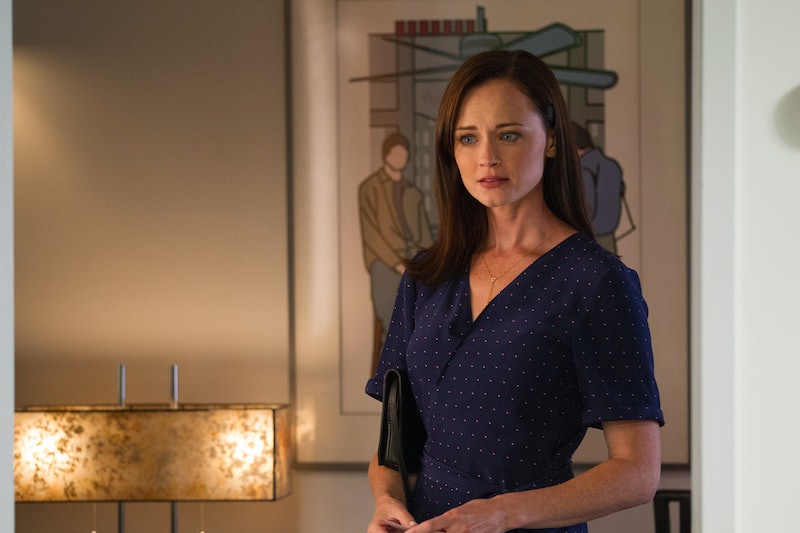 If there's one incredibly polarizing struggle on the Gilmore Girls revival, it's Rory Gilmore's career in journalism. Her job interview at SandeeSays was indicative of what she was getting right and failing at as a writer, and served as one of the key moments that I, as a professional writer myself, related to on a very deep level. In fact, I was able to find plenty to praise about Rory's journey as a struggling writer; there were also some big moments where I was screaming at my computer screen because Rory was going about things in the entirely wrong way.

Even when factoring in Rory's white privilege and the fact that her entire childhood in Stars Hollow was a kind of echo chamber, continuously reaffirming how special she was, Rory's nose wasn't always clean in A Year in the Life. At times during this revival, the portrayal of Rory's writing career was problematic. But before I discuss where Rory's life as a writer wasn't portrayed 100 percent correctly, let's take a moment to celebrate the successes.

First things first: Rory's got gumption. I like a girl with gumption. As a writer and a woman, I can tell you that working as a freelancing female writer requires nerves of steel and gumption. When you spend hours trying to squeeze out even a glimmer of an idea for a story, you then spend even more time frantically searching the internet to make sure it hasn't been covered before you feverishly write out a pitch to an editor you've probably never met. All the while, you're hoping to get the pitch approved, get validation for your ideas, and use your new platform to show off your voice. You need gumption for that.

Rory is also tireless in her search to find the right way to use her writing talents. Whether it's writing Naomi Shropshire's biography on spec (read: for free), brazenly calling a Condé Nast editor to write a piece on lines, or actually finding the nerve to actually write a book about the Gilmore women, Rory was always looking for a silver lining. Optimism is key, especially when you're working as a freelancer and quietly fighting to remain visible to the public and those in the journalism field.

Even the way Rory's own failures as a writer affected her emotionally were a very real, right, and positive portrayal. She's constantly flailing. She worries she's irrelevant. She is less than thrilled to have to move back home after living and working in London and New York. These are real, lived-in experiences that I have and that plenty of millennials have. Her choice to pursue writing as a career means she may experience struggles or setbacks along the way.

Unfortunately, the things that make Rory's writing career seem legitimate are counter-balanced with some pretty unrealistic aspects, too. First off, I can tell you right here and now that there are maybe a baker's dozen writers who have been working less than a decade that are living on the fame of one piece they wrote years ago. This is the case for Rory, whose New Yorker article is constantly referenced and acts as the laurels she feels she can rest on as times. Every time that damn New Yorker article got a shoutout, I moaned to nobody in particular (but mostly Rory, who couldn't hear me); the sentiment remains. Don't even get me started on the fact the she thought she could show up to the SandeeSays interview without any story ideas and somehow found the guts to lambaste the CEO over the phone without thinking twice about it. An actual professional writer would do neither of these things.

Also falling into the unrealistic category was Rory's ability to float from place to place, living off the kindness of friends and family, somehow paying for transatlantic flights without batting an eyelash. A writer's salary is absolute peanuts until you've spent a fair amount of years working, getting published regularly, and have climbed the ladder to the point where that work and visibility translates to a stable writing gig at a publication. This is the dream for many writers out there. In the meantime, most of us are scraping by and watching Rory live more than comfortably really struck a nerve.

For all of the good and bad, though, Rory's life as a writer is like mine in one very real way: She made it her way. She pursued the stories she wanted, connected with the publications she chose to connect with, and prioritized her voice over another's. As usual, Rory was stubborn in her vision of how her future should go, but steadfast in making in happen. Writer to writer, I gotta give props where props are due.