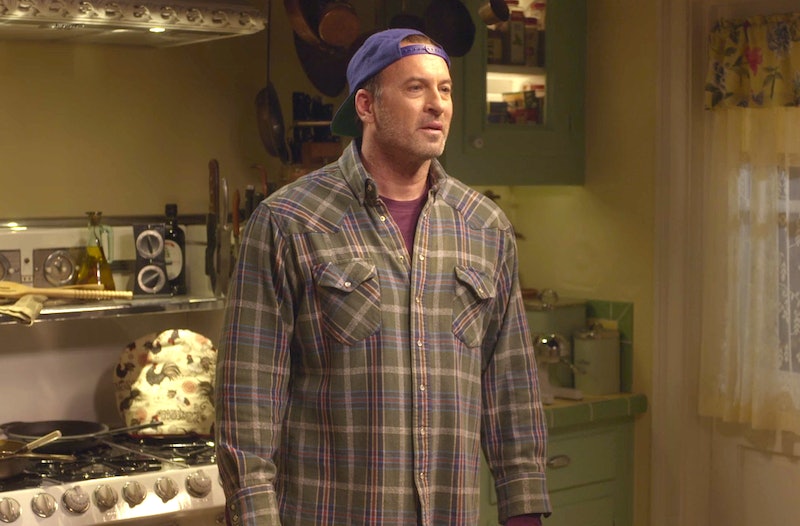 Although the debate over who Rory should end up with dominated Gilmore Girls revival discussions before it premiered, I have always been much more invested in Lorelai's love life. I feel that Luke is the unsung hero of the series and Luke's speech to Lorelai in Gilmore Girls: A Year in the Life during "Fall" proved just how true that sentiment is. While what happened to Rory's romantic relationships during A Year in the Life probably underwhelmed you (to say the least), Luke's heartfelt proclamation of his dedication to Lorelai showed how Luke and Lorelai are the one true Gilmore Girls 'ship.

The last episode of the original series gave fans hope that Lorelai and Luke would get back together and the revival made good on that promise by having them living together in unwedded domestic bliss. Except Lorelai was having a bit of a crisis as she was fighting with Emily, Rory, and Luke. So after Sutton Foster sang "Unbreakable" for Stars Hollow: The Musical, Lorelai was inspired to channel the book Wild (not the movie!) and do some soul-searching by hiking the Pacific Crest Trail in California. I guess if Foster personally serenaded me, I might be inclined to do something radical too, but I was upset with this path for Lorelai because although I want her to be happy, this storyline not only felt out of character, but also very insensitive to her partner Luke.

Yet, two great things came from Lorelai's journey to the West Coast (three, if you count the Jason Ritter and Peter Krause cameos). Even without hiking, Lorelai made amends with Emily by calling her mother and telling her a touching memory about Richard. If that phone call wasn't gut-wrenching enough, Luke was a mess without Lorelai, as Jess discovered when he visited the diner. So even though Luke should have known that Lorelai returning home early from her trek meant she was going to stay with him, his panicky naïveté led to one of the greatest moments of the entire revival.

When Lorelai returned home during A Year in the Life, Luke told her how he was happy with their relationship and that she is all he needs. He said he had never imagined in his wildest dreams that they would actually be together and though he admitted he's not the easiest person to build a life with that, "There is no one who will be more here for you than me." Followed with, "I will never leave. I will never think about leaving." Swoon.

This part was all the more swoon-worthy because Gilmore Girls fans know just how true that statement is because Luke has proven time and time again that he'll always be there for Lorelai. (Unless he discovers he has another secret daughter or something ... ahem, moving on ... )

He continued by listing all of the things he would do to improve their relationship to make Lorelai happy, including seeing her "nutty therapist" and giving back half of their closet because, "You need the space and I need you!" And I must give Scott Patterson credit for his performance because it was impossible not to feel Luke's devotion during this scene with emotional punch after emotional punch since then Luke started talking about their past relationships.

Luke has pretty much always been in love with Lorelai, even when he was married to Nicole, and he didn't hesitate to talk about the people who had hindered their happily ever after in the original series:

"God dammit, Lorelai! We have been through so much. We have watched each other go from person to person. I mean, there was Rachel, and Max, and Christopher. I had to watch you marry that guy and it was awful!"

Same, Luke, same. But as he stated: "But we made it here — we made it through all of that." And he ended there with his desperate plea, "You can't leave, you just can't leave." Thankfully, Lorelai put him out of his misery there by stopping him and saying the exact opposite of what Luke was expecting — that they should get married. Ah, it was like the end of Season 5 all over again.

The Wild detour was frustrating as I knew that Lorelai wasn't going to leave Luke, but it was all worth it since it made my lovable curmudgeon from behind the diner counter get so emotional and give this impassioned speech about his love for her. To me, Luke's speech was even better than their actual wedding since viewers were able to hear how Luke truly feels. (And it also doesn't hurt that Patterson told TODAY that it was his all-time favorite Luke and Lorelai scene.) It was everything that fans have always known Luke to feel, but he had never really articulated before. Although Luke may be a relatively simple man when it comes to what he wants out of life, his feelings for Lorelai run deep.

And that, my Gilmore Girls-loving friends, is true love. As much as we can still debate about who Rory should have ended up with (*cough* Jess *cough*), the one thing that can't be argued with is that Lorelai and Luke belong together and Luke's speech made that more apparent than ever.