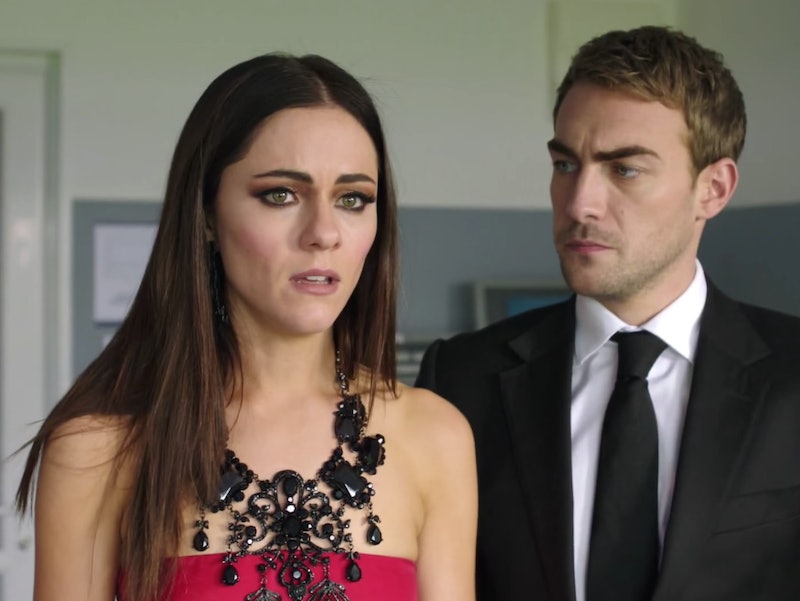 With the release of its first two seasons so close together, The Royals lulled its "Loyals" fan base into a false sense of security. Although Season 3 of The Royals has been confirmed, there is no release date yet or any sign of filming having started. After that bonkers Season 2 finale, The Royals has a lot of questions to answer when it returns to E! and though this show always surprises me with its twists and turns, that doesn't stop me from coming up with Season 3 theories for The Royals .

Legitimate information on Season 3 is fairly scarce at this point and I can't even offer a reasonable hypothesis on when the next season will premiere since Seasons 1 and 2 of The Royals were released within the same year. However, so much drama went down in the Season 2 finale that it's kind of good to have extra time to process every twist and turn. Ted Pryce may have been killed by an angry British mob, major characters who were presumed dead might be alive, and — perhaps the most surprising plot of all — Princess Penelope might have actually found love with anti-monarchist Nigel Moorefield.

As Loyals wait for news on Season 3, here are some theories on what might happen when the guilty pleasure series returns. Fair warning: With how crazy this show gets, I expect less than half of these guesses to be correct ... and I wouldn't want to have it any other way.

The Twins' Paternity Will (Finally) Be Revealed

Not only do I strongly think that Simon is actually the father of Eleanor and Liam, I also strongly want this plot point to get wrapped up. It's been since the end of Season 1 that Helena lied about the twins' paternity so that Liam could not become king and disband the monarchy. Can The Royals please just stop harping on this mystery and tell fans who is their dad?

Helena Will Go On The Warpath About Simon's Missing Body

Something that may be essential in the mysterious case of the twins' paternity is Simon's DNA. When Helena went to retrieve his bones from his tomb in the Season 2 finale, she (most likely) discovered his tomb was empty. Since Loyals saw Simon be stabbed to death, I don't think Simon is alive, but I do think that Cyrus may have hid the body to stop Helena from ever being able to prove her children's paternity. The ruthless queen is not going to let this go and I'm excited for the epic battle that should ensue as she tries to discover the truth about her husband's body.

Cyrus' Cancer Will Go Into Remission

The Royals created a conundrum in Season 2 by giving one of its most interesting characters terminal cancer. Since Cyrus is Helena's greatest foe and he adds a healthy dose of villainy to the series, I don't want him to be killed off. On the other hand, The Royals killing Cyrus could make for a very interesting story line. Still, I'm rooting for him to get the upper hand on Helena in Season 3, even if it's just for a bit. Plus, he's got a son to go search for and some revenge to take care of. Speaking of ...

Violet Will Still Be Alive

Although another character recently came back from the dead in Season 2 (more on that in a bit), I'm suspicious that Cyrus' love Violet could still be alive since The Royals never showed how she died. Although the Grand Duchess claims to have killed her, — and fans know Helena's mother is capable of murder since she caused Dominique's death decades earlier — until I see a dead body, I will remain incredulous.

This theory is based on actual fact since TVLine reported that Wilhelmina actress Genevieve Gaunt will be a series regular for Season 3. With Ophelia in America, along with the fact that her dad killed Liam's dad, it seems Willow will be maintaining Liam's interest in Season 3. But don't forget that the deputy prime minister did offer a job to Liam in New York City, so Willow may have competition from Ophelia in Season 3 after all.

Robert Will Return To The Palace

Speaking of casting news, I'm anxiously anticipating that E! will have to name an actor to portray Prince Robert. Considering the Season 2 finale showed that Robert is most likely alive, I will be super disappointed if he doesn't show up and isn't a prominent character in Season 3.

Jeleanor Will Be A Thing Again

Perhaps this is just wishful thinking, but Jasper and Eleanor bonded during the Season 2 finale and I'm more than hoping for this pair to hook up again. Although Eleanor told Jasper he should leave after revealing Ted Pryce to be King Simon's killer and Jasper betrayed Eleanor by not revealing that Mandy was really Samantha, he also proved how much he truly cares for the princess. C'mon, Season 3! Let's make Jeleanor happen again.

More like this
'Bridgerton' S3 Teases Exciting Social Season For Penelope Featherington
By Bustle
This 'White Lotus' Symbol Could Hint At A Major Character's Death
By Grace Wehniainen
'The White Lotus' Costume Designer Explains That Accidental 'Princess Diaries' Moment
By Grace Wehniainen
How Is The British Royal Family Related To The Romanovs?
By Karen Fratti
Get Even More From Bustle — Sign Up For The Newsletter