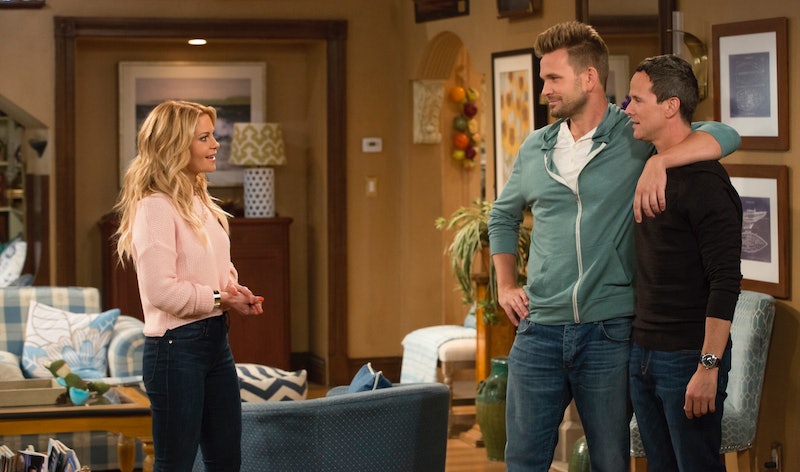 We've already gotten several sneak peaks on the chockfull-of-holidays new season of Fuller House, and among all the dancing and gobbling, it looks like there's going to be even more relationship drama. Although Kimmy is now back to being happily settled with her ex-husband/current fiancé, D.J. had to pick between Steve and Matt, ultimately choosing herself, and Stephanie — well, Stephanie had a few interesting romantic endeavors, but nothing solid. But a recent TVLine interview with creator Jeff Franklin revealed that Season 2 is definitely going to take some interesting romantic twists and turns for the two Tanners. Spoilers ahead.

To begin with, it's confirmed that this isn't the last fans will see of the Steve and Matt conflict, although it will come to a definite end this time around. According to Franklin, not only will D.J. actually choose a suitor, but you won't even have to wait until the season finale to find out who she picks. Just don't expect to get the answer before then. "We were really torn amongst the creative staff," Franklin said. "I think it’s a great problem to have — you’ve got two really interesting guys pulling D.J. in two very different directions. It’s a fun thing to explore."

Now if the Fuller House trailer is any indication, the show might be leaning toward Team Matt versus D.J.'s high school sweetheart; you can catch a glimpse of them about to mack it on New Year's Eve before a stream of balloons. But who knows, maybe the franchise will pull another giant twist on us.

As for Steph, she has her own complicated relationship forthcoming: She hooks up early on with Kimmy's unseen-until-now little brother Jimmy. "They have this baffling physical attraction that starts from the first moment they see each other," Franklin revealed to TVLine, and the trailer definitely teased this since the couple gets a kiss in before Stephanie realizes he's of Gibbler descent. Despite that unfavorable fact, it's looking like Jimmy will be a breath of fresh air compared to the disasters Stephanie usually dates (Hunter Pence notwithstanding.) "He’s not a genius by any means, but he’s unique and interesting and really sweet," Franklin said.

But as she gets strangely serious with this new guy, is it possible that Stephanie's infertility will come into the conversation? "I think it will continue to be a big part of Stephanie’s evolution as a character," Franklin said. "We’re definitely not going to drop it and pretend it didn’t happen." That could definitely bring another layer of depth into the oft-times silly sitcom, and fans can be emotionally prepared for it.

However, we'll still have to wait to see how the Tanner sisters' new-old relationships unfold, and even if it starts to get hairy, the She-Wolf Pack at least has each other. Make sure to check in on these ladies when Fuller House hits Netflix on Dec. 9.