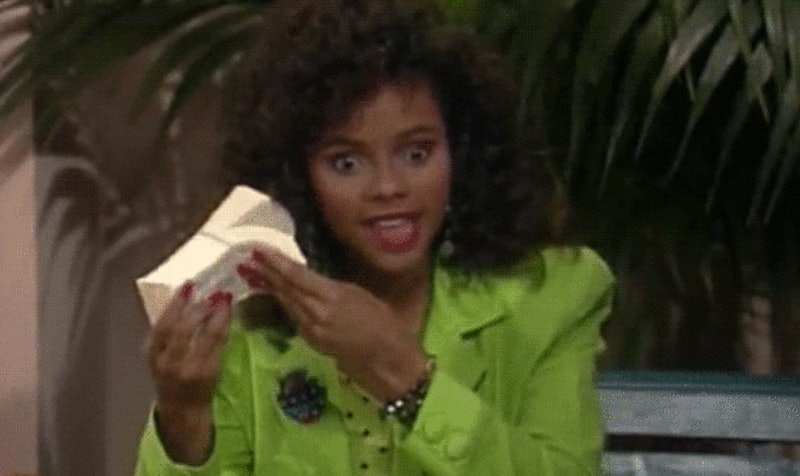 Getting in on the hustle and making money as a kid in the '90s was, in some ways, very different to how it is today. Some things will always be the same — for instance, getting a summer job running newspapers or at a local ice cream shop (the kinds of things which are timeless, because as I was writing I realized I might be describing a scene from the '50s). Some things will be different, of course. Nowadays I simply assume kids are using some kind of app to make money, or hawking Kylie Jenner lip kits or Yeezus merchandise for three times the price online. In the '90s we had to think a little more outside the box.

It's not to say we weren't greedy in the '90s. It's just that saving up $30 to buy a CD was slightly different. It meant consulting the experts (Zillions magazine) and starting various clubs (i.e. Babysitter's) which were designed to rake in the big bucks ($2 an hour). There was a unique flavor to '90s money making schemes, just as there was a unique flavor to your '90s desires when it came to spending. Here are 11 things you did to make money as a kid in the '90s.

Every '90s kid needed to come armed with an arsenal of knowledge if they were going to start spinning the big bucks. Making money for a kid in the '90s therefore always came with a subscription to Zillions magazine, a magazine dedicated to financial advice: for children.

You didn't really get POGs. You collected them, sure, because it was cool to, but when it came to playing with them, if we're being honest, you had no idea what they were for. To to make some extra bucks, you'd always sell your rare ones. Although you could never be sure the friends you were selling to had any idea what they were for either.

3. Made An "Art Gallery" And Invited Your Parents To Buy Your Works At An Inflated Price

Before the Internet, there was hours of drawing. And hours of drawing could always be turned into a lucrative venture, a bedroom "art gallery" where parents would be invited to come and spend anywhere from $2 to $5 on your doodles.

4. Started A Babysitter's Club With Your Friends

Of course, the best way to make money in the '90s was to start a babysitter's club. If it was anything like The Babysitter's Club, it would also be a great coming-of-age rollercoaster ride between friendship, love and looking after small children.

5. Started A Less Lucrative But In No Way Less Meaningful Detective Club With Your Friends

You thought you'd make money with your detective club, but no one ever hired you. Apparently mystery solving by children wasn't in high demand in the '90s. But reading books on tracking and spying was fun anyway.

6. Formed A Spice Girls Tribute Band And Charged People To See You "Perform"

7. By Doing Chores, Especially Really '90s Things Like Putting Your Parents CDs Back In Their Correct Cases

Chores are a timeless, universal way for kids to make money. But in the '90s, chores were definitely more '90s. For instance, when your parents paid you to go through their CD collection and put the hundreds of CDs that were in the wrong cases back in the right ones. Probably not something you'd get paid to do today.

What is it about getting paid to mow someone's lawn that epitomizes the money making capacity of a '90s child?

Remember when eBay started and everyone scrambled to sell whatever they could online? Nineties children would try and sell their "valuables" on eBay to make an extra buck or two.

10. Giving Your Friends Lifts To School In Exchange For Fuel Money

If you were of driving age in the '90s, you'd carpool before and after school — but also make your friends empty their pockets of all their spare change (which to be fair, was sometimes less than a dollar) into your defunct car ashtray so you'd be able to afford gas.

11. Burning CDs And Selling Them To Your Friends

If you were the lucky child whose parents had TWO CD rom drives, burning CDs was super duper easy. You'd take the blank CDs your parents would buy (no financial investment for you) burn CDs, infringe copyright, and sell them on to your friends at a small price (which would work out to a 100 percent profit for you).