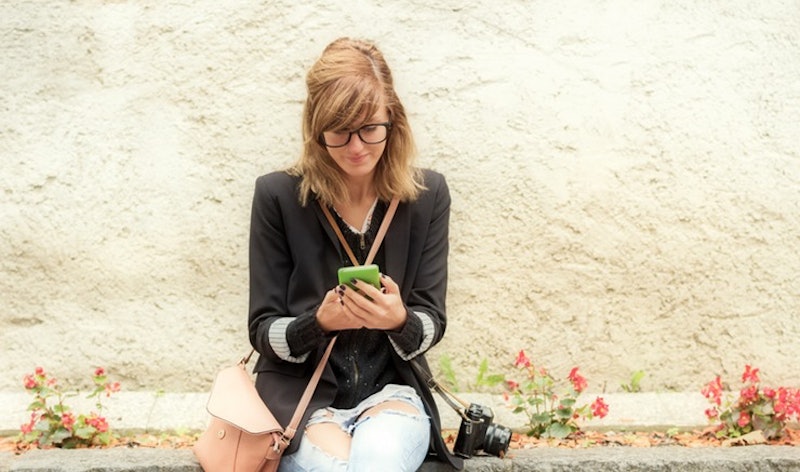 You and I both know people on dating apps and sites, perhaps including ourselves. Now, a new study by the University of Scranton found that Tinder profiles are like old-school personal ads, and the researchers gave us some dating and Tinder tips and hacks we can all use. After all, everyone’s doing it, right, using Tinder? Not only is the four-year-old app available in 30 languages and used in 196 countries, but, each day, there are more than 1.4 billion swipes on Tinder, a Tinder spokesperson tells Bustle. Each day, 26 million matches are made on the app worldwide. Plus, to date, there have been more than 20 billion matches made on Tinder. No doubt, it’s super popular.

So, do heterosexual women and men seek mates and “sell” themselves differently online than they did years ago, when they placed lonely hearts (aka personal) ads in newspapers? In other words, what are people’s mating preferences and approaches on the ever-popular Tinder? That’s exactly what Dr. Barry X. Kuhle, associate professor of psychology at Scranton, and his researchers aimed to find out. “We hypothesized that sex differences in what men and women desire and how they attract a mate evidenced in newspaper lonely hearts ads from yesteryear will be similar to what they seek and how they sell themselves nowadays on smartphones via Tinder,” Dr. Kuhle tells Bustle.

Evolutionary psychologists like him used to analyze newspaper ads to identify what women and men look for and how they advertise themselves to potential romantic partners, says Dr. Kuhle. So, he and his undergraduate research assistants (RAs) decided to study Tinder due to its popularity. “It’s very popular and a cool way to study human mating strategies that doesn’t involve merely surveying them,” says Dr. Kuhle. “We can study not what they say they want in a scientific survey, but what they report wanting in a real world situation.” I’m sure most of us have tried Tinder at some point, so I can definitely see why they chose it.

“The more things change, the more they stay the same.”

How was the study conducted? Dr. Kuhle and his RAs created fake male and female accounts and analyzed profile photos and bios of 272 women (with a median age of 23) and 374 men (with a median age of 26.3) in the Pennsylvania, New Jersey, and New York areas. They rated photos on attractiveness and how humorous they were. Profile bios were then analyzed for word count, traits sought, traits advertised, and whether the user appeared interested in a committed relationship or “hooking up” (i.e., casual sex). Disagreements on ratings were settled through discussion among the principal investigator and his undergraduate team, comprised of five female and four male students. In-te-rest-ing, right?!

Here are the study’s key findings, followed by some Tinder hacks from Dr. Kuhle.

1. Many People Did Not Have A Bio Written

The study found that 25 percent of Tinder users that Dr. Kuhle and his researchers analyzed had no profile bio and just pictures, which he found surprising. ICYMI, Tinder allows for a 500-word bio. (If you want tips for writing your bio, check out this piece on what dating experts advise.) Furthermore, many who did compose one barely did so, Dr. Kuhle says, “sometimes but a few words, or, worse still, a handful of emojis.”

2. Women Had More In Their Bios & Were More Selective Than Men

The study found that women were significantly more likely than men to list more traits sought and more traits they found unattractive, as predicted, says Dr. Kuhle. For instance, 2.6 percent of women sought a partner who was tall or taller versus 0.3 of men. That women were more selective than men was one of the least surprising things that Dr. Kuhle found, he says. “Given that a poor mate choice was more reproductively costly to ancestral women than men, we predicted and found that, relative to men, on average, women’s bios listed more traits sought and more traits to avoid,” says Dr. Kuhle. “For example, women’s bios were six times more likely than men’s to explicitly state that they were not looking for a hookup — 5.7 percent percent of women but only one percent of men.” Funny, I used to state that in mine, too — and I found it did deter guys wanting hookups, as I talk about more below.

Women also sold themselves more than men by including more photos of themselves, says Dr. Kuhle, 4.9 percent versus 4.4 percent. Hence, they were more likely than men to attract mates through their physical appearance, the study discovered.

5. Men’s Pictures Tended To Be Reveal Different Character Traits, Too

The research found that men were more likely than women to sell themselves by being funny or athletic in their profile pictures, says Dr. Kuhle. Eight percent of men’s picture sets were deemed funny versus 2.9 percent of women’s. As far as posting pictures which showed their athleticism, 19.8 percent of men did so versus 8.5 percent of women.

“Equally unsurprising from an evolutionary psychological perspective, given the greater reproductive benefits to ancestral men than women from casual sex, we predicted and found that modern men were 4.5 times more likely than women to explicitly state that they were looking for a hookup,” Dr. Kuhle says.

OK, so now, given the above findings, what’s a Tinder-using guy or girl to do?

1. Have A Mini Focus Group, i.e., Some Friends, Look At Your Profile Before You Post It

“Have members of the sex you desire provide feedback on your profile bio and pictures before posting them,” says Dr. Kuhle. Makes sense, right? Just like you may have friends proof your cover letters or resumes when you’re applying for a job, have friends look at your dating bio and pictures, too. After all, you’re having someone(s) apply to be your significant other, so you should treat it as a significant deal.

2. Look At Others’ Profiles For Dos and Don’ts

“Take a looksie at other profiles of your sex before crafting your own,” says Dr. Kuhle. “My RAs and I were frequently shocked at how poorly written, awkward, and downright odd many bios were, and how ‘WTF?!?!’ many pictures were.” I’m sure we’ve all seen our fair share of these, too, right?

3. Think About Your Dating Goal

When I asked Dr. Kuhle if he’d recommend that people use Tinder, he says it “depends on the person and what they’re looking for. If you’re a long-term mater seeking your monogamous life-long spouse, then other dating sites may be more up your alley. But if you’re looking for something more casual and less committed, then Tinder may serve you well.”

Personally, when I used to be on Tinder in L.A. and Chicago, I actually only matched with nice guys on Tinder (only one salacious message ever) and had a few boyfriends result from Tinder. Like Dr. Kuhle says, I truly think it depends on the bio and pictures you have up. For instance, I had no revealing pictures up — no bathing suit or bikini ones. I wanted a guy to swipe right based on my bio and what-I-would-be-wearing-out-on-an-average-day, like jeans and t-shirts. (Some friends of mine used to complain about all the guys messaging them for sex, and when I’d ask to see their profiles, I’d see that the profile pictures they had up may have been sending the wrong message.)

Plus, when I Tinder-dated, I had a bio that promoted question-asking. (No doubt, I learned this from having worked for Dating Coach Evan Marc Katz and writing people’s dating profiles for e-Cyrano.com.) Here’s my Tinder profile bio, which I used on Bumble, Happn, and Hinge, too (I met a few boyfriends with this bio, including my current one via Bumble and Happn!).

And though people used to think of Tinder as more of a hookup app, now, more and more people are getting married after having met on Tinder. To that point, 80 percent of Tinder users are looking for long-term relationships, a Tinder spokesperson tells Bustle.

In summation, what did Dr. Kuhle think of the findings? “The more things change, the more they stay the same,” he says. “We may search for mates through a different medium these days, but our human nature — what we seek and how we sell ourselves — has not changed over time.”

More like this
The Best Time To Date After A Breakup, According To Experts
By Bustle Editors
Hinge's New NFAQ Feature Is Demystifying Queer Dating
By Emma Carey
What Is The Forest Personality Test? The TikTok Trend, Explained
By Georgina Lawton
Expert Tips For Being On Top When You're Plus-Size
By Lexi Inks
Get Even More From Bustle — Sign Up For The Newsletter