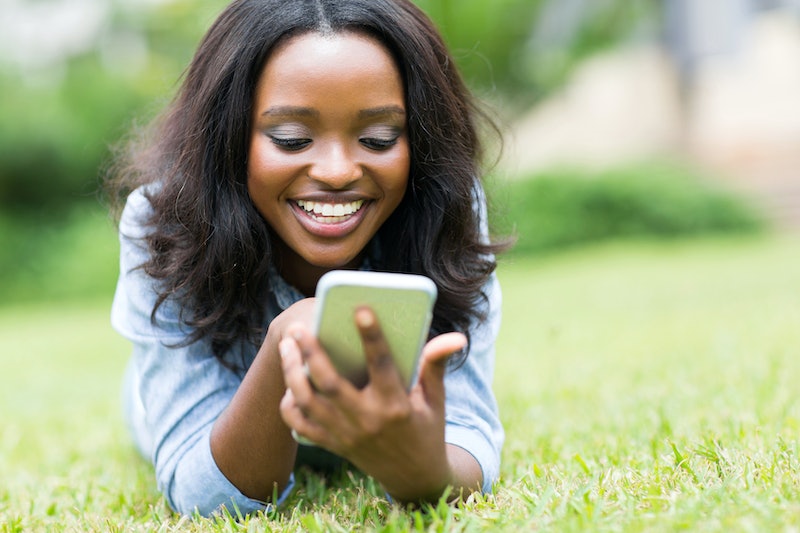 If you've been single within the last couple of years, I’m sure you’ve used a dating app or two (or ten), as well as online dating sites via your computer. Hands down or fingers down, I should say — there are more benefits to using dating apps versus sites, I think.

Aside from being more efficient, I think their interfaces tend to be more appealing and easy to use, too. Plus, there seem to be apps catered to everyone, from the ever-popular standards, like Tinder, to ones for beard-lovers, like Bristlr. And then there are apps where you “never travel alone,” like MissTravel, and meet up with a match in a different city, or Bumble, where hetero women have to message men first.

Honestly, it seems like there’s a dating app out there for everyone, which can’t necessarily be said for dating sites. And, personally, I’ve met more of my boyfriends on apps (I’m looking at you, Bumble, Happn, Tinder, and Hinge) than sites (Match, eHarmony, and OkCupid). “Dating apps give you access,” Allison Gerrits, Matchmaker, Three Day Rule, tells Bustle. “It’s as simple as that. You can connect with people based on a wide variety of interests."

Here’s why dating apps are better than dating sites.

Due to the nature of apps, on our phones versus computers, the interfaces are easy-to-use and the profiles are short-and-sweet. “Dating apps have the portability factor, so you can use them while you’re on the bus or waiting for an appointment,” New York–based relationship expert and author April Masini tells Bustle. “Because they’re so easy to use on phones, you can take them with you and use them all over the place. Your life can be a lot more flexible with these portable apps. They can be big time savers and success builders in dating.”

It’s always a plus to meet a romantic interest through a friend, right? It’s like a letter of recommendation, but an IRL person recommendation instead. “It’s great to see that you have mutual friends in common (on a dating app) because it automatically creates a sense of comfort and trust,” Tina Wie, VP of Marketing for Three Day Rule, tells Bustle. “The stronger your mutual friend connection (i.e., first-degree over third-degree) and the context in which you know them (i.e., they went to business school with your high school buddy or used to work with your college bestie), the more likely you’ll feel that the person you connected with is a normal, interesting person. You’ll also have something in common to talk about instantly when you’re first communicating, which is nice.”

With apps, there are so many great ways to determine if a match seems right for you: the mutual friends you share, the music they like (if you’re on an app where you can display your music tastes or send each other songs), the few pictures they post (I mean, is it just me, or does Match allow people to post way too many?!), etc.

4. On Many Apps, You'll Only Get Messages From People You've Liked Too

Don’t you hate all the spam emails on sites? With many dating apps, you can only message with someone if you like them and they “like” you back (i.e., swipe right on you). A big win, if you ask me. “You can cut to the chase in a lot of ways,” says Gerrits. “You can find people who have similar interests and people who are looking for the same thing.”

You probably know that dating app profiles tend to be way shorter than online ones, so every word or picture really does count. “In general, apps are usually a little more abbreviated because they’re meant to be used on smaller screens, where less is more,” says Masini. “If you’re a swiper or a quick-choice dater, an app is more suitable than a dating website.”

Gerrits agrees. “You have to develop a strong sense of self to paint an accurate and intriguing picture of your identity,” she says. “Highlighting your interests and values gives you the chance to sit down and evaluate what’s really important.” Amen to that. Not to mention, I think a lot of people have short attention spans.

6. Dating Apps Tend To Be More Niche Than Sites

If you’re only into guys with beards, you can join Bristlr. If you’re open to clean-shaven men, too, you can expand your dating horizons and join apps like Tinder. Want to know where you crossed paths with a potential match? Check out Happn. There’s even an app, Meet My Dog, that has you meet through your dog. I know, right?!

Want to send a match a song? You can via Spotify on Happn, Tinder, and Bumble, for instance. Want to eave them a one-minute voice message (or several one-minute messages in a row)? Use Happn. Want to send them a video/photo montage? Try Lively.

8. They’re Perfect For People Who Are Super Busy

Do you seem to be at work all the time, so when are you supposed to go places to meet people IRL? Yep, that’s where apps come in. “Dating apps give you more choices than you’d normally have in real life,” says Masini. “They can be like going to a big party where you meet people — except with much less wear and tear on your body!”

Let’s face it: Some people are just awkward when you speak to them at bars or parties or at whatever social outing you happen to meet them at. But, one-on-one, via a dating app, for instance, they’re great. Dating apps are an introvert’s dream come true. As an extrovert who tends to date a lot of introverts (whom I’ve met on apps), I vouch for this 100 percent.

10. They’re Perfect For People Who Work From Home

Do you work from home? It’s ~amazing~, right? Until it comes to meeting people — and potential dates! — that is. Also, with apps that have expanded their dating intentions to friend intentions, too, like Tinder Social and Bumble BFF, you can also find people to hang with platonically, not just romantically. Dealer’s (erm, swiper’s) choice!

11. You Can Make A Date With Someone Nearby… For Right Now

Yep, with a lot of apps, they tell you how far (or near) someone is, which means that they could be in the very same room or bar or restaurant that you’re in right now. And Happn uses geotracking and even tells you where you two intersected, at this street and this street. So, if you don’t want to wait to meet, you don’t have to. Technology, huh?