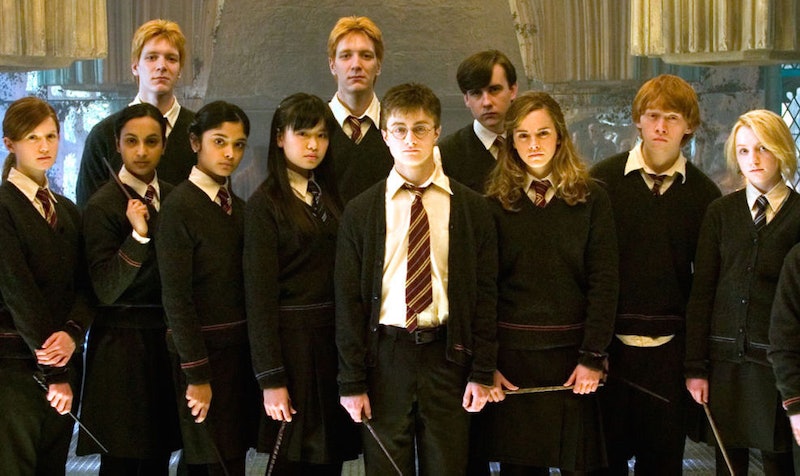 Being inspired by J.K. Rowling's Harry Potter series to be an advocate is nothing new, but the lessons that Dumbledore's Army taught readers have taken on a deeper meaning since Donald Trump won the U.S. presidential election. With 2017 quickly approaching — and thus, Trump's presidency — now is the perfect time to reflect about the student resistance group from Harry Potter and the Order of the Phoenix. Harry Potter has already been helping people cope with Trump's presidential victory, so now let the D.A. inspire you to take action in 2017. In times of despair, there is always hope.

I recently went to the wizard rock band Harry and the Potters' annual Yule Ball show. If you aren't familiar, simply put, they are band who "plays songs about books," but their reach goes far beyond just silly songs about Harry Potter. They also encourage activism in the spirit of the books. Band member Paul DeGeorge created the Harry Potter Alliance, which advocates for equality, human rights, and literacy, and also Nerds for Her, which asked that fans join together in electing Hillary Clinton. The concert was a reminder that Rowling's books aren't just great literature; they can be used as a template to fight Trump's xenophobic, racist, homophobic, sexist, and anti-environmentalist views. Pretty much anyone can be a member of the D.A. when it comes to advocating for equality and what's right.

As you gear up for Trump taking office, remember these lessons from the students at Hogwarts, who weren't afraid to stand up against their teachers and government by forming the D.A., to help influence your advocacy efforts.

With Umbridge as the Defense Against the Dark Arts teacher, the Hogwarts students were left more vulnerable than ever in a world where Voldemort had come back. So the D.A.'s initial purpose was practical education, with Harry teaching his fellow students useful spells that they could actually use to defend themselves with. You might not be able to learn spells, but you can arm yourself with knowledge, so you'll be ready to defend your views verbally. And, like Harry, patiently teach others what you know.

Along with educating yourself, the D.A. was all about preparation in case of a fight. I'm not advocating physical violence of any kind, but if you will be speaking to a group — whether it's a speech or just at a family dinner — practice what you're going to say. Be ready for any verbal backlash by learning protection spells, as well as defense spells.

3. Use Other Leaders As Inspiration

Originally, the D.A. stood for Defense Association, but Ginny suggested they name the organization Dumbledore's Army. If you're more inspired to be an activist when you think about someone who represents and fights for your values, do that. Something tells me that there could be a Clinton's Army or a Sanders' Army popping up.

4. Know That Even Small Spells Can Help

Expelliarmus isn't a fancy spell, but, as Harry proved time and time again, it gets the job done. Don't be a Zacharias Smith and think that only really big acts of activism matter. More power to you if you can become a full-time activist, but you can still do good in small ways, like donating to an organization like the American Civil Liberties Union (ACLU).

5. Unite With People You Don't Always Agree With

In a perfect world, you'd only be working with your BFFs like Ron and Hermione, but, as the D.A. showed, any organization you work for or join will inevitably have people who don't have the same exact world view as you. Even though people may annoy you, it's better to have them on your side working toward a common goal than not. Just make sure they are worthy of your trust, since you won't be able to jinx them like Hermione did.

While you might be advocating for others, don't forget to look out for yourself. Dumbledore's Army was all about having the tools to defend yourself, as well as others. So whether you're part of a marginalized group that could be directly negatively impacted by Trump's presidency or not, believe in yourself and know that you're fighting the good fight.

7. Look To History For Guidance

If you're concerned that the U.S. has regressed by electing President Donald Trump, and past mistakes in history seem to be repeating themselves, you aren't alone. Rather than focusing on the failures of humans in the past, focus on the triumphs. Harry was motivated by his parents' work in the Order of the Phoenix, so let other activists from throughout history be your guide.

8. Don't Be Scared Or Intimidated

If a bunch of young wizards were willing to face the wrath of Umbridge, the Ministry of Magic, and Voldemort himself, you got this. Don't let the bullying of the more militant and racist Trump supporters make you unwilling to stand up for what you believe in.

9. Be Understanding Toward People Who Opposed You Before

Seamus and Harry didn't get along in the beginning of fifth year with Seamus not believing Harry that Voldemort was back. Later, Seamus realized the errors of his ways and ended up requesting to join the D.A. If you know someone who voted for Trump and is now acknowledging he or she shouldn't have, don't be rude about it. People can change, and, though you might be frustrated, it takes courage for people to admit they changed their minds. Like Michelle Obama said, "Go high" and accept that person into your advocacy efforts.

Harry knew that it was of the utmost importance that his group had a safe space to meet, and, through this desperation, the Room of Requirement appeared. Sometimes the best ideas come in the darkest of times, so don't shut down; use these dark times as an opportunity to make things better. Keep thinking of ways to be an advocate and brainstorm with others.

Even though the D.A. was disbanded pretty quickly, the fact that the group still had a presence in Hogwarts during The Deathly Hallows means that some students never gave up. Keep speaking up, and get out and vote in two years so that Trump and his party don't continue having control over the presidency, the Senate, and Congress.

12. Acknowledge That You Don't Have To Be Harry Potter

Speaking of The Deathly Hallows, Neville Longbottom ended up leading the resistance at Hogwarts when Harry, Hermione, and Ron didn't return in seventh year without them even knowing. It just shows that you don't have to be the great Harry Potter to make a huge impact. Be the person who continues to put up the "Dumbledore's Army Still Recruiting" signs.

This quote isn't from Harry Potter, but from Rowling on Twitter after the U.S. election. The author has proven many times that she's officially the best person on Twitter, and this tweet echoes the lessons that she taught readers through her books. This idea of challenging leadership when it's wrong is what Dumbledore's Army is all about.

Keep spreading the message of love that Rowling taught millions of readers even after Donald Trump becomes president.