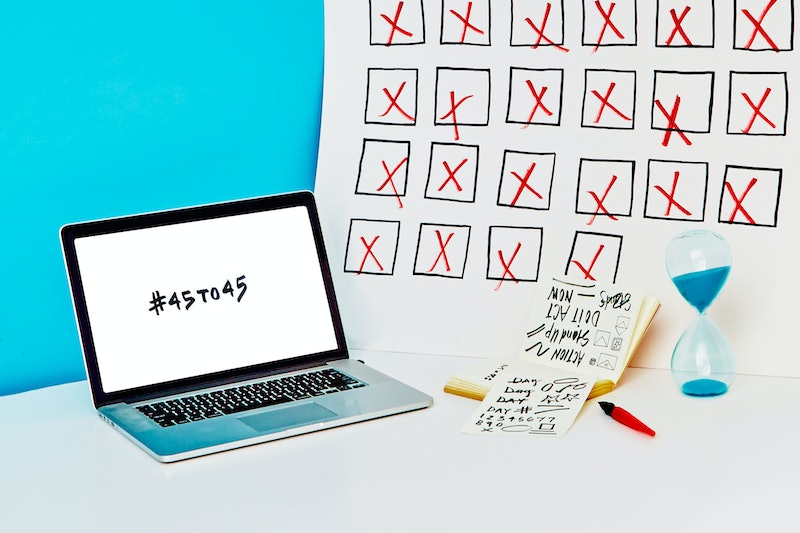 After Trump was elected, many people were concerned not just for the future of the United States, but also for their own individual futures. Mae Wiskin, Tyler McCauley, and Lindsay Schrupp started the Every Day Project with these people in mind. Every day, its subscribers receive an email telling them about something they can do to alleviate the hatred and discrimination that has been emboldened as a result of Trump's administration and its supporters.

Wiskin tells Bustle in a phone interview that she and her co-founders began the project after hearing from people who wanted to make a difference after Trump's election, but felt overwhelmed by all the political actions to take and organizations to donate to. "I realized a lot of people, including myself, were feeling really helpless, and we needed to channel our energy into something meaningful," she says. Instead of making people do all that research themselves — which, while valuable, can be daunting, particularly if you don't know where to start — the Every Day Project offers suggestions about what they can do, giving them prompts to follow in order to make a difference.

"We can't normalize Trump," Wiskin says. "It'll become increasingly easier to do so because people have to get on with their daily lives."

The Every Day Project's website encourages readers to share the page with their families and friends to hold them accountable for following through with each daily action. So far, these prompts have included asking your Senator to oppose Trump's appointment of U.S. Representative Tom Price, who is anti-choice and opposes marriage equality, as Secretary of Health and Human Services and signing a petition asking Trump to revise his policies on the environment. You can sign up for the daily emails any time, and any that you miss will be available to view on the website. There will be 45 actions total, which Wiskin considers "training" in preparation for Inauguration Day on Jan. 20. After the project's 12 days in existence, there are around 2500 subscribers.

Whether or not you can carry out everything the Every Day Project suggests, what matters is that you just do something, says Wiskin. Since social justice work can get really overwhelming, she recommends picking an issue you're passionate about and energized by and starting with small things, like teaching someone you know about it or reading an op-ed to educate yourself.

McCauley believes the simplest way to make a difference is to pick up the phone and express your views to your representatives. Once you get used to it, he says, being politically active becomes easier. "The more you practice political action, the less you'll put off a phone call to your Senator, or donating to a non-profit, or hesitate to attend a city council meeting or protest," he tells Bustle over email. "Pick your issues, pick your communities, and dig in. You'll find that not only will it be easier to fight hopelessness when you make those connections, but you'll be able to see the results of what you do."

The easiest step we can all take in Wiskin's view is to become more conscious consumers. We can make an effort, for example, to question where our news is coming from as well as understand the other side. It's a lack of understanding of Trump's supporters that led liberals to be so surprised by the election's results, and Wiskin believes we need to put ourselves in their shoes to start addressing the problems they've furthered.

Yet she's still hopeful that deep down, liberals and conservatives all want the same things, and by talking, we can work toward them. "I inherently think that people are good and people want to listen to each other and inevitably, we all are trying to live for the same things: life, liberty, and the pursuit of happiness," she said. "We need to remember this country was founded on beliefs of inclusivity and social justice."

More like this
5 Crystals To Manifest More Money
By Megan McCarty
10 Times Boris Johnson Got It Wrong On Trans Rights
By El Hunt and Sam Ramsden
How To Protect Your Digital Privacy If You Need An Abortion Post Roe v. Wade
By Kaitlyn Wylde
What Is Barack Obama’s Net Worth? He Makes *Way* More Now As An Ex-President
By Hugh McIntyre
Get Even More From Bustle — Sign Up For The Newsletter