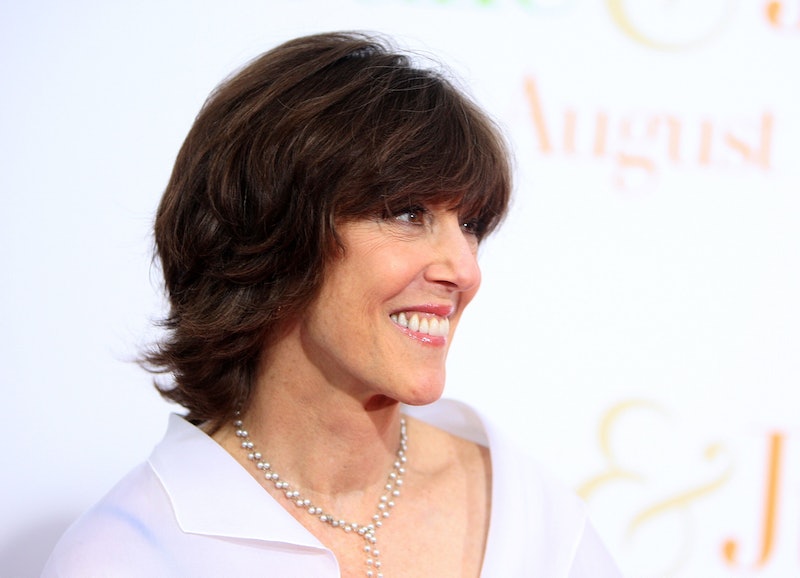 It’s at the end of Nora Ephron’s life, in “Room 242” at New York Hospital where Washington Post columnist Richard Cohen begins and ends She Made Me Laugh: My Friend Nora Ephron , his recent tribute to the journalist-Oscar nominated screenwriter-essayist-director-playwright. He recalls sitting with her husband and sisters and sons at her hospital bedside as family and friends drift in and out of the room.

Ever the reporter and observer, Ephron was noting the process, even as she went in and out of consciousness. “In out, in out,” she said to him. “So it’s happening.”

I first came to know Cohen when I was a graduate student at the University of Southern California through an introduction from my professors. My master’s thesis tackled what Ephron would say we should do about “the marriage crisis” — the record high of young adults not now and not likely to ever be married as millennials eschew traditional nuptials in favor of cohabitation or permanent single-dom. Ephron, I thought, the master of the romantic comedy and second and third wave feminist critiques, would most certainly have the answers.

“You know what Nora would say the problem is?” Cohen told me. “Men.”

It became clear that for all of his years of hard news reporting in New York and Washington, Cohen was softened by the tiny but mighty tour de force that was Nora Ephron.

She made him laugh.

“She had immense self-confidence, a ready wit, a capacious hard drive of a mind, and absolute certainty,” Cohen writes, noting that she emanated so much strength that she could seemingly summon a cab from blocks away.

“There was then and always an air about Nora of great wisdom — not merely, if I may correct myself, of great wisdom, but of greater wisdom,” Cohen writes. “She was smart, very smart, and knowledgeable, very knowledgeable, but beyond that she had an inerrant touch for the best of almost anything.”

Ephron directed films, but she also directed the lives of the people she loved most — and that included Cohen. Her specific instructions post-mortem — even for the sandwiches to be served at the reception the day after her death — were outlined neatly in a file on her computer called “Exit.”

“How will you write this book without her telling you what to do?” actress Meg Ryan asked Cohen, who starred in three of Ephron’s most popular films and counted Ephron as a friend and mentor. But it was through writing that Ephron and Cohen shared one of their strongest bonds. “As I wrote, I felt like she was with me the entire time,” Cohen told me. “I think she would be happy.”

After being diagnosed with a blood disorder in 2006, an illness she kept hidden from most people, she continued to write, oftentimes with her sister — novelist, screenwriter, playwright Delia Ephron — with whom she co-wrote You’ve Got Mail, Hanging Up and Bewitched and the play, Love, Loss and What I Wore. The two were even working on a teleplay from the hospital during Ephron’s final days. Cohen explains that for Ephron, to stop writing would have been “like a death that preceded death.”

Writing was more than a way to make a living. It was a way of life. It became her saving grace after her very public and painful split from Cohen’s fellow Washington Post colleague, journalist Carl Bernstein in the novel and film Heartburn , and in between successful films in Hollywood. Stories about Ephron’s devotion to the craft of writing — from her news story ledes, to essay rewrites, to collaboration on scripts — have become legend.

Coming of age in journalism during the second wave of feminism in the 60s and 70s, Ephron’s candid, forward-thinking approach and biting prose made her a standout voice, landing her a job at the New York Post. Whether she was writing about relationships between men and women, politics, or her candid disdain for the size of her breasts, she eventually earned her own column in Esquire in 1972 where she continued to write about women’s issues, and often even “quibbled and quarreled with the women’s movement” itself, Cohen writes.

“Nora couldn’t take a movement without humor,” he said. “She lived the life of a feminist, but was at heart a journalist; an observer, not a joiner.”

And yet, she celebrated feminism and womanhood in everything she did, from bestselling books like Crazy Salad: Things About Women to her most lauded films, like Julie & Julia and Silkwood. “She loved being a woman — loved it for all of its feminine virtues — and loved being one of the girls,” Cohen writes. “She surrounded herself with women, sought out the talented ones, gave them lunch, encouraged their careers, understood their problems as a man could not.”

But it was an Italian man who stole her heart and inspired her most popular films: the 80s and 90s romantic comedies such as When Harry Met Sally… (which co-starred the late Carrie Fisher in one of her most hilarious roles), Sleepless in Seattle and You’ve Got Mail.

Ephron’s newfound love was with screenwriter Nick Pileggi (Goodfellas, Casino), who she married in 1987. Pileggi’s mission, Cohen writes, “was to make Nora Ephron happy. He succeeded.”

Food — one of Ephron’s other longest-running love affairs — was one of her favorite ways to bring people together. It’s fitting, Cohen writes, that the culinary flavored biopic Julie & Julia was her last film. It has a warm, maternal instinct to it that is so charmingly Ephron.

“It is about the passion of the supposedly passionless middle-aged man and woman, love arriving not late, but right on time,” he writes. “It is about Paris. It is about writing and it is, in all those themes, about the life Nora made for herself with Nick.”

Ephron, an ambitious writer, film director and loyal friend, was always a doting mother, and that tenderness is perhaps best seen through the single mother characters in her films This is My Life (played by Julie Kavner) and in My Blue Heaven (played by Joan Cusack).

She was certainly not a typical person or writer, Cohen writes, but she was a typical mother in her devotion to her sons.

So how did Nora do it all, said Cohen, according to Academy Award-winning actress Meryl Streep?

In her essay “Thing I’ll Miss/Things I won’t Miss,” one of the only times she hinted at her illness, she wrote about her love of books, dinners, Christmas, New York, her children, and of course, Nick.

“Nora never lost sight of the power of being a girl,” Streep told Cohen, recalling Ephron’s direction in Julie & Julia. “She would be funny and she would be soft. She’d say, ‘I think if we just had a little light on it, it could be perfect.’”

To Cohen, that was his darling Nora: Powerful, feminine, funny, soft, bright, perfect.

More like this
50 Books To Read With Your Book Club
By K.W. Colyard
10 Must-Read New Books Out This Week
By K.W. Colyard
The Biggest Differences Between 'Bullet Train' & The Book It’s Based On
By Arya Roshanian
We’ve All Had Bad Sex. Nona Willis Aronowitz Is Talking About It.
By Sophia Benoit
Get Even More From Bustle — Sign Up For The Newsletter