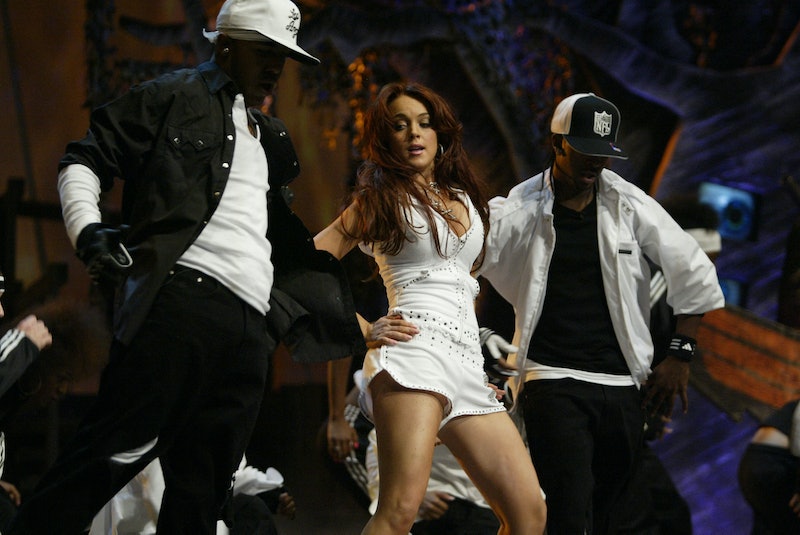 They say history repeats itself, and this is never more true than in the case of awards shows. This year's Oscars was an exact replica of the 2000 show, and the Golden Globes, with Cate Blanchett, Amy Adams, and Julia Roberts all up for awards, was just a repeat of 2007. Yet no 2014 awards show has reminded us of another year's ceremony quite as much as Sunday night's MTV Movie Awards, which, judging from what we know so far, is going to be just like 2004's.

Although most of the movies and people honored at this year's show are quite different than those ten years ago, several other aspects of the Awards are strikingly similar — which isn't necessarily a good thing. From Spider-Man to Eminem, here's how the 2014 MTV Movie Awards compare to the 2004 show:

A Mean Girl is the Star

In 2004, it was all about Lindsay Lohan. The then-superstar had just come off of Mean Girls and Freaky Friday, and so it only made sense that she not only won Breakthrough Female, but hosted the actual ceremony. In pure early '00s fashion, Lohan opened the show with a dance battle. It was epic.

There's going to be a Mean Girl on this year's red carpet too, but it's not Lohan. Amanda Seyfried, known back then as Karen "there's a 30 percent chance it's already raining!" Smith, is set to present an award at Sunday's show. Her appearance makes sense; out of all four Plastics, Seyfried is the biggest star, thanks to blockbuster movies, a Best Picture nomination, and a social media-friendly dog. Meanwhile, Lohan's getting yelled at by Oprah every week. Oh, how the times change.

Spider-Man Was All the Rage

Ten years ago, a Spider-Man sequel was about to hit theaters, and the MTV Movie Awards was a prime place for promotion. Then-stars Tobey Maguire and Kirsten Dunst presented the award for "Best Movie," with a costume-donning Ellen DeGeneres "auditioning" to be the next Spider-Man.

This year, a Spider-Man sequel is hitting theaters this summer, and the MTV Movie Awards is a prime place for promotion. Stars Andrew Garfield and Emma Stone will introduce an exclusive clip from the upcoming film, alongside perpetual third-wheel Jamie Foxx. Only time will tell if he'll be wearing a Spider-Man costume, too.

One doesn't normally think of the MTV Movie Awards as a high-end ceremony, but apparently, when it comes to honoring good movies, the show likes to follow Oscar's footsteps. In 2004, Best Movie went to that year's Best Picture winner, Lord of the Rings: Return of the King. This year, 12 Years a Slave is the category's frontrunner, with two other Best Picture nominees, The Wolf of Wall Street and American Hustle, also in the race.

If 12 Years wins, it'll be an odd repeat of 2004; sure, Return of the King was the best movie on the list, but it shouldn't have been competing against 50 First Dates and X2: X-Men United. As for 12 Years, winning will just seem odd when one realizes that it's competitors included Catching Fire and The Desolation of Smaug.

Remember D12? Neither does anyone else. Back in 2004, however, they were an up-and-coming hip hop group fronted by Eminem, and they showed up at the MTV Movie Awards. Promoting the band wasn't Eminem's only task at the ceremony that night, though; you might remember him so kindly mooning the audience while on-stage.

The rapper is returning to the Awards this year, but hopefully, his appearance on Sunday will be a little less, um, revealing. Along with Rihanna, Eminem is set to perform "The Monster," their new single. Let's hope pants stay on this time.

This year, a three-way kiss between James Franco, Ashley Benson, and Vanessa Hudgens from Spring Breakers is a favorite to win. If it doesn't, the American Hustle scene where Jennifer Lawrence places one on Amy Adams might just take the title, or perhaps it'll be another three-way kiss, this time between Emma Roberts, Will Pouter, and — you guessed it — Jennifer Aniston in We're the Millers.

Lord of the Rings Was Up for All the Awards

Not only did Lord of the Rings: Return of the King win Best Movie at the 2004 show, but it also picked up an award for Best Action Sequence. Dominic Monaghan and Sean Astin were on hand to accept the two prizes.

Now, The Hobbit: Desolation of Smaug is the LotR movie to be taking home the trophies. The prequel may not be exactly be a member of the Lord of the Rings collection, but it's expected to pick up prizes just the same; Smaug is nominated for Best Film, Best Fight, Best On-Screen Transformation, and Best Hero.

Back when he definitely was famous, Shia LaBeouf was nominated for the Breakthrough Male Award at the 2004 MTV Movie Awards. He lost to X2's Shawn Ashmore, but that didn't stop him from making an impact at the show. Donning a T-shirt saying "I got served" and a perpetually bemused expression, LaBeouf certainly stood out from the rest of the Disney-bred attendees.

He may not be attending the show this year, but no doubt there'll be at least a few LaBeouf-related jokes told at the ceremony Sunday night; the MTV Movie Awards has always been a bit behind when it comes to timely humor. It wouldn't even be surprising if LaBeouf actually showed up, if only to reclaim his MTV Movie Awards fame and reveal to the world another highly important message, courtesy of his T-shirt.

More like this
Here Are All 703 Outfits Rachel Wore On Friends
By Kat George
Jennifer Aniston Reacts To Her Father John’s Death At 89
By Jake Viswanath
Then Vs. Now Photos Of The 'Enchanted' Cast In 2007 & The Sequel's Stars In 2022
By Marina Watts
See 'Twilight' Stars Together Again For A Sweet Cullen "Family Reunion"
By Stephanie Topacio Long
Get Even More From Bustle — Sign Up For The Newsletter