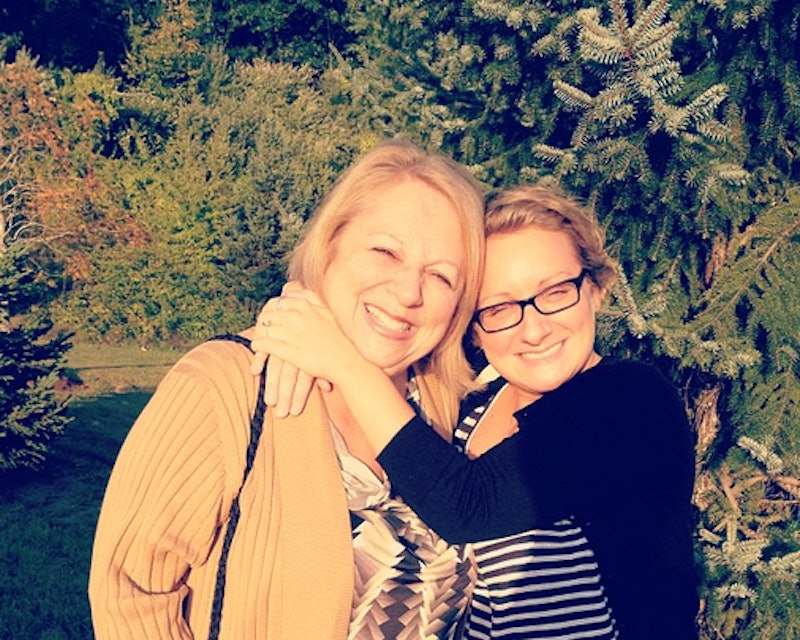 Editor's note: Because one day just isn't enough, Bustle will be posting one feature a day this week about our mothers. Hey, it's the least we can do. Happy Mother's Week!

My mother is a fairly sheltered person. Raised in Salem, Massachusetts, my mother married her high school sweetheart, never went to college, and settled in Southern New Hampshire where she became a stay-at-home mom. Our family wanted for nothing, went on frequent family vacations, and all was well. Or so I thought.

Because while I may have wanted for nothing, that was not the case for my mother.

I called my mother and cried — a lot. I cried because I wasn’t writing. I cried because New York City didn’t welcome me with the same pomp and circumstance that it had welcomed Truman Capote. I cried because I thought I had made the wrong decision, and that I should give up and just go home. My mother wasn’t having it.

My mother remained close to home her entire life. Because she doesn’t do fear so well, my mom avoids anything that might evoke it at all costs. And although I never knew it growing up, my mother’s fear of the unknown has kept her from doing many of the things in life she’s wanted to.

My mother has never been to Europe, never taken a trip alone, and never pursued her dream of becoming a fashion designer in New York City. She says she doesn’t regret any of it, and that her life turned out exactly how she wanted it to. Still, she admits, that doesn't stop her from wondering, “What if?”

When I was a kid, I decided that I wanted to be a writer in New York City. Having never even visited the city before, my parents thought it charming and adorable that their country bumpkin would conjure up such a dream. As with all my dreams that had come and gone, they assumed it would pass.

I was a nervous little girl, too shy to even talk in class. Like my mother, I was terrified to leave my comfort zone. When the time came, I never even considered applying to NYU, and opted for a state school instead.

But shortly after I graduated from college, I finally decided to move to New York City. I had not yet entirely shaken the fear from my bones, but my desire to succeed, to not fall into the life pattern of those around me, was powerful.

Although apprehensive at first, my mother eventually delighted in the fact that I was moving to New York City. She told anyone who would listen that I was Manhattan-bound, and was more than happy to take me shopping for things that I would need. When I couldn’t find the perfect shade of blue for my quilt, she made me one instead.

My mother may not have had the courage to go to New York City on her own, but she was sure as hell excited to help me prepare for my big move. It was scary to go out into the unknown with no one to hold my hand, but my mother insisted I try.

Life in the city wasn’t easy. I found a job within the first month, but I hated it. Most nights I couldn’t afford anything but nachos, and for the first several months I didn’t stray too far away from my apartment in Alphabet City.

I called my mother and cried — a lot. I cried because I wasn’t writing. I cried because New York City didn’t welcome me with the same pomp and circumstance that it had welcomed Truman Capote. I cried because I thought I had made the wrong decision, and that I should give up and just go home. My mother wasn’t having it.

“Of course it’s hard!” she said, “But what did you expect? Did you really think it was going to be easy?” Although there were several nights that she let me cry it out, there were far more nights when she sternly told me to stop crying. Seriously, what did I have to cry about, really? She told me to stick it out, buck up, and save my tears for real life tragedies.

Unlike my mother, I want to lose control: I want to fall down, scrape my knees, and maybe even chip a tooth in the pursuit of living. From eating the suspicious street meat from an NYC food cart, to smoking hash on a park bench during a last-minute trip to Amsterdam, I want it all. I want to be able to say at the end of my life that I did become a writer; that I did live in the city I dreamt about for all of my youth; that I do know what it’s like to see the sun rise from the steps of Sacré-Cœur; and that I did feel the fleeting fear of getting lost on the dark streets of Rome.

My mother will be coming to Europe for the first time in her life this May. She will be here for my wedding, and the fact that she’s even getting on a plane is a big deal. Yes, she’ll be with my father and my sister — so she won’t be alone — but considering their collective fear of flying, she might as well be flying solo. I know that coming here is no small feat, and I can’t wait to show her the streets of Paris.

After all, I sit here today because of my mom. I sit here in Paris today for both of us.

More like this
Here's How To Support Jewish People Amid Rising Antisemitism
By Hannah Orenstein
These Are The 3 Most Mellow Zodiac Signs
By Kristine Fellizar
Emily Ratajkowski & Pete Davidson's Astrological Compatibility, Revealed
By Nina Kahn
Prince William Condemns “Unacceptable” Comments Made To A Black Guest At Buckingham Palace
By Shahed Ezaydi
Get Even More From Bustle — Sign Up For The Newsletter