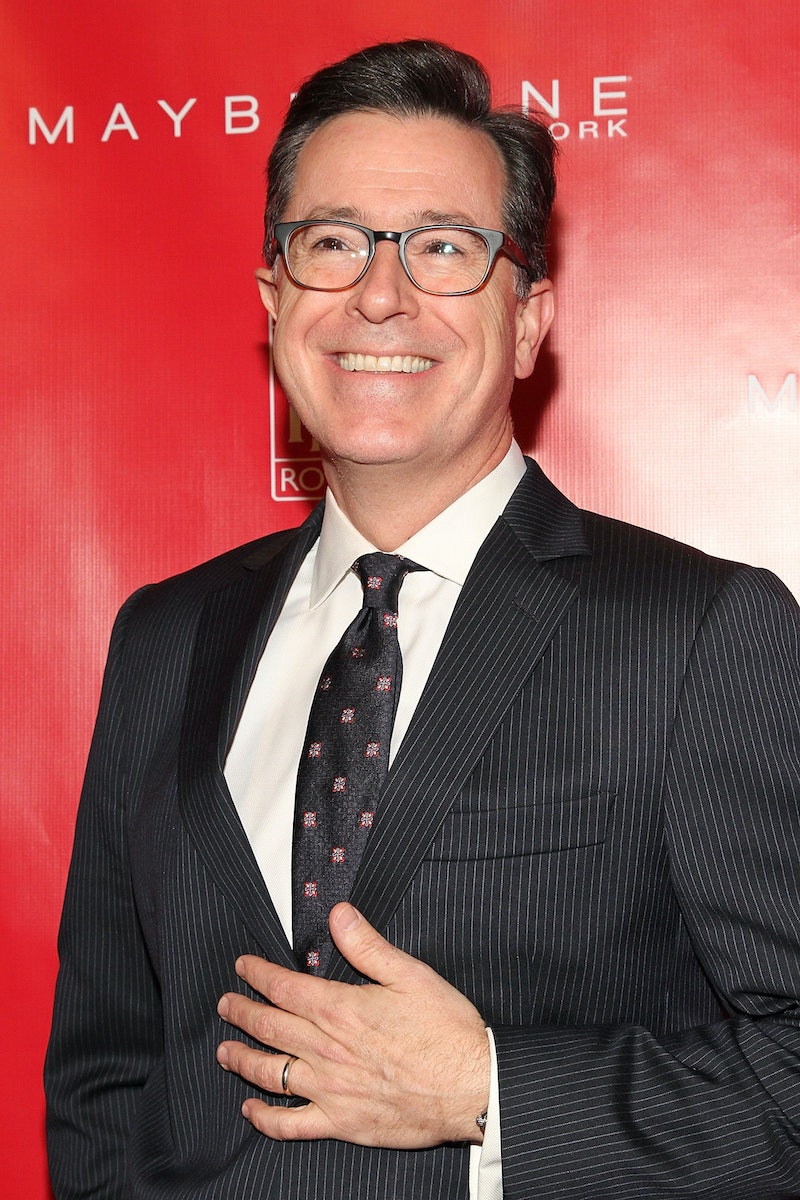 Just a week after the big announcement that David Letterman will retire in 2015, CBS has already revealed that Stephen Colbert will be The Late Show' s new host. Though there is not an official premiere date of Colbert's Late Show yet, he does have a five-year contract with the network, so you can expect to see him in that 11:35 time slot for a while. He will face pretty stiff competition from both ABC's Jimmy Kimmel and NBC's Jimmy Fallon, so fans should keep their fingers crossed for an extension of that deal. CBS released an official statement following the announcement.

"CBS Television Network today announced that Stephen Colbert, the host, writer and executive producer of the Emmy and Peabody Award-winning The Colbert Report, will succeed David Letterman as the host of THE LATE SHOW, effective when Mr. Letterman retires from the broadcast. ...

Letterman, the legendary, critically acclaimed host of the CBS late night series for 21 years, announced his retirement on his April 3 broadcast. Colbert's premiere date as host of THE LATE SHOW will be announced after Mr. Letterman determines a timetable for his final broadcasts in 2015. Special creative elements, as well as the producers and the location for the Colbert-hosted LATE SHOW, will be determined and announced at a later date."

It's not much, but at least we know it's really happening, Colbert will host The Late Show. Colbert's own statement brought some much-needed life to the news.

"Simply being a guest on David Letterman’s show has been a highlight of my career. I never dreamed that I would follow in his footsteps, though everyone in late night follows Dave’s lead. I’m thrilled and grateful that CBS chose me. Now, if you’ll excuse me, I have to go grind a gap in my front teeth."

Letterman, meanwhile, kept his statement brief, saying, "I’m flattered that CBS chose him. I also happen to know they wanted another guy with glasses."

But that's not the only thing Letterman and Colbert have in common, and this news might be disappointing for many who hoped to see some much-needed diversity in late night television. Chelsea Handler seemed to be a top choice, since she is leaving E! when her contract expires, but she'll have to look elsewhere for her next job. Neil Patrick Harris had already shot down rumors that he was in line, while Ellen DeGeneres made fun of the speculation on her show.

Yet even as everyone debated who should replace Letterman, one thing was clear: no matter who takes his desk, he will be missed. Even The Simpsons paid tribute to the host with a touching opening. It's no surprise, Letterman has hosted The Late Show for over 31 years, turning him from a comedian into an icon.

Sure, Colbert will do great, but only if he makes The Late Show his own. Letterman's legacy is too great to be imitated.