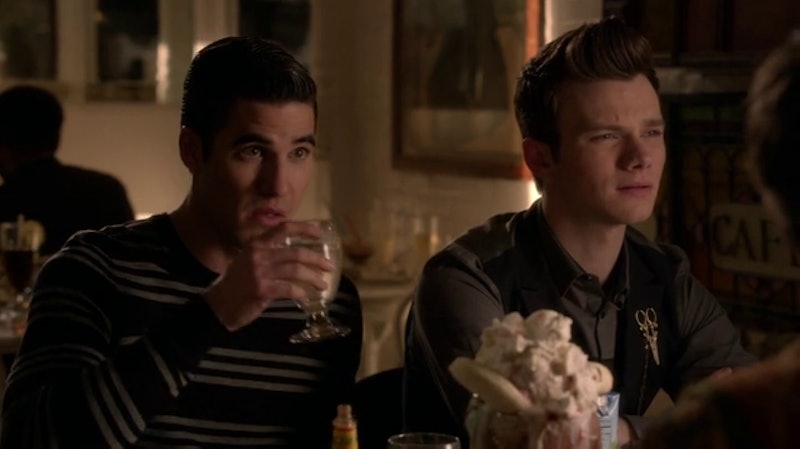 There are only four episodes left in Season 5 of Fox's most musical dramedy, which means it's time to start looking forward to the sixth and final season of Glee. One of the main questions we have as the show wraps up its penultimate season is: What's going to happen to our favorite showtune-loving couple? Even though we've been enjoying the more adult stories coming out of the show ever since it moved full-time to NYC, Blaine and Kurt haven't exactly had it easy. In fact, we're starting to get nervous that Klaine may weather another breakup. Let's examine the evidence to find out whether or not there's a happy ending in Klaine's future.

Love, on the rocks

We likely won't see much Klaine drama in this week's episode, since it focuses primarily on opening night of Funny Girl. But the summary for next week's hour, titled "Back-Up Plan," has us worried:

At NYADA, Kurt gets a valuable opportunity to perform for a wealthy socialite who is known for fostering and launching the careers of many burgeoning artists. Thrilled with the chance to make a lasting impression, Kurt – committed to the idea that he and Blaine should always share their career boons together - recruits his fiancé to sing with him. Blaine finds himself put in a difficult position when the socialite takes more of a liking to him than to Kurt.

So, to recap, since moving to the Big Apple:

1. Blaine and Kurt decided they shouldn't live together anymore, and Blaine moved out.

2. Blaine grew jealous of Kurt's success at NYADA, put on the Freshman Fifteen, and attacked his fiancé in stage combat class.

3. Now, Kurt will be jealous of Blaine after the former Warbler steals Shirley MacLaine from him. Can these kids not catch a break??

But what about the last two episodes of the season? Surely Klaine gets to be happy at least once before the finale, right? Not if you ask showrunner Ryan Murphy:

You've seen a lot more of the Kurt and Blaine relationship, and we're heading towards what's going to happen to them. They pretty much have had trouble every episode. [...] All of these things are building to a head in [the finale]. I would say "explosion" is too harsh of a word, but something big happens, and the final season is the aftermath of that.

Well, that's... ominous. Glee isn't particularly known for season-ending cliffhangers, but Klaine having trouble in every episode leading up to an "explosion" that will affect the entire last season certainly makes it seem like the couple is heading for a cataclysmic breakup.

Let's do the time warp again

In the same interview quoted above, Murphy revealed that there will be a significant time jump between Seasons 5 and 6. While he hasn't specified exactly how big of the jump will be, the prevailing theory is that the show will fast-forward until the kids are all out of college. Once they're in the adult world, it allows the writers more freedom to maneuver them to wherever they want — which apparently won't include the Big Apple much, since Murphy also said "the final season is not New York-centric at all."

So what would a time jump mean for Klaine? If they do indeed break up (again) at the end of Season 5, it would give them time to heal, explore their options, and grow as independent people — hopefully before a glorious reconciliation in the show's final episodes. After all, one of the main complaints about their relationship — and particularly their engagement — is that these kids are too young to be talking about soul mates and marriage. But if the show skips ahead to their post-college adult years, suddenly marriage feels like a viable option.

So even if Blaine and Kurt do part ways sometime in the next few episodes, don't get too worried. When the tragic death of Cory Monteith (and the fictional passing of Finn Hudson) sadly put an end to any long-term plans for Finchel, suddenly Klaine became the most significant relationship on the show. Do you really think Ryan Murphy would end Glee with these two crazy kids not together? And what better excuse to gather all the major players, recurring characters, and famous guest stars in one place for the series finale than a fabulous gay wedding?