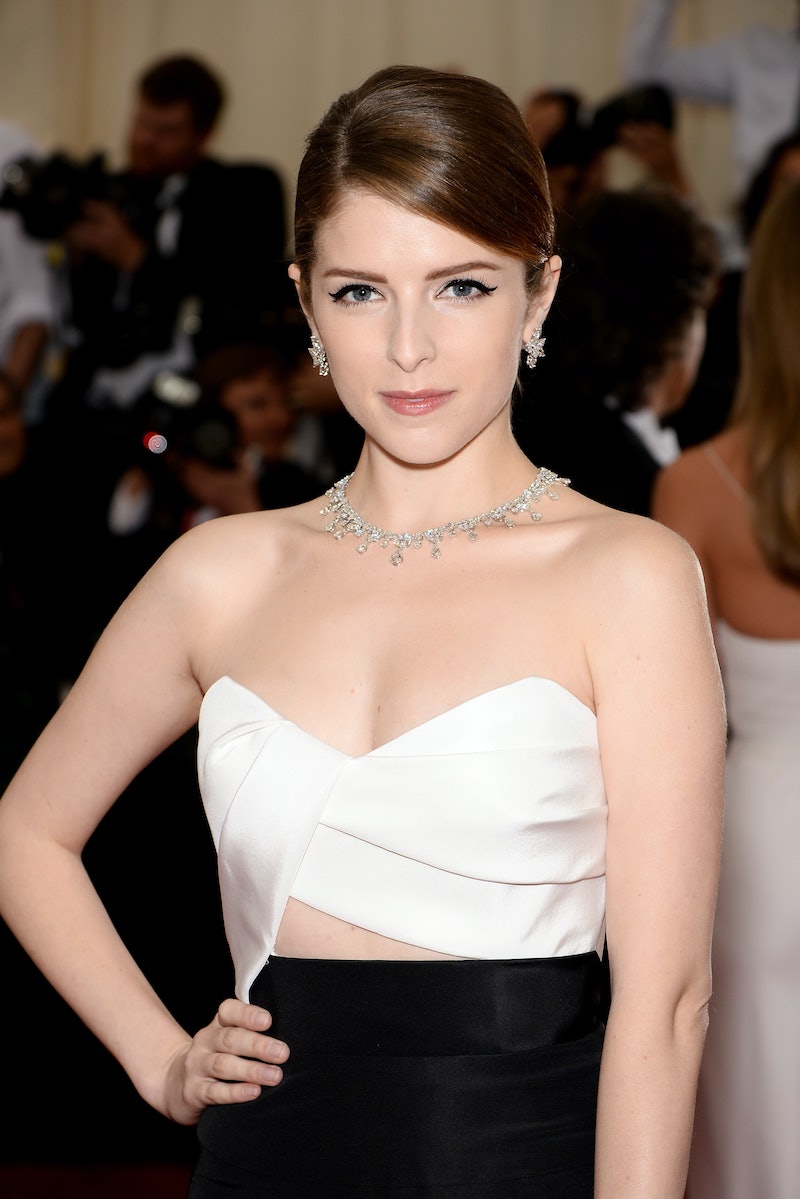 It's often been said that Ryan Seacrest is the busiest person in Hollywood, but pretty soon, Anna Kendrick might just give him a run for his money. According to IMDB, the actress has eleven movies set for release this year and next, including The Hollars , a dramedy co-starring and directed by The Office 's John Krasinski. While not all of those films will necessarily hit theaters when they're supposed to, that still means that Kendrick will have spent a crazy amount of time this year and last filming roles in movies ranging from quiet indie dramas to feminist movie musicals (hell yeah, Pitch Perfect 2 !) Somehow, she also found time to host SNL , attend the Met Ball, and make that hilarious Super Bowl commercial. How'd she do it?

We have no idea, but we do know that Kendrick's busy schedule was well worth it. Her upcoming slate of movies doesn't look to have a dud on the list; rather, every single project the actress has planned could easily be our next favorite film. From least to most interested, a ranking of Kendrick's next films:

About: A woman (Kendrick) who falls for the perfect guy (Sam Rockwell), only to discover that he was once a hit man, and that his past career is about to catch up with him.

Why we're excited: Kendrick and the extremely underrated Rockwell will make a fantastic team. We're a bit worried about that plot, though.

About: A mentally ill man (Ryan Reynolds) who believes his pets are talking to him, advising him to become a serial killer.

Why we're excited: The movie received great reviews at Sundance, and seems just the perfect mix of quirky and dark.

About: The relationship between a struggling actress (Kendrick) and a novelist (Jeremy Jordan).

Why we're excited: It's based on Jason Robert Brown's acclaimed musical, and any film that has Kendrick showing off that voice is a win in our book.

About: A 20-something (Kendrick) who moves in with her older brother (Joe Swanberg) and his family, including his novelist wife (Melanie Lynskey).

Why we're excited: It also stars Lena Dunham. Plus, Swanberg, who directs, made the fantastic Drinking Buddies, also featuring Kendrick.

About: Zach (Dane DeHaan), whose recently-deceased girlfriend (Aubrey Plaza) rises from the dead.

Why we're excited: Casting Plaza as a zombie might be the most genius film decision in recent memory, but having DeHaan, Kendrick, John C. Reilly and Cheryl Hines star alongside her is a close second.

About: An aspiring artist (Krasinski) who takes his girlfriend (Kendrick) back to his hometown, where they encounter his dysfunctional family, including his mother (Margo Martindale), who's about to have brain surgery.

Why we're excited: First of all, that cast; in addition to those listed, Richard Jenkins plays the father. Mostly, though, it's the fact that the movie's being described as a mix of Steel Magnolias and Garden State. Um, YES.

About: No one knows the plot yet, but we do know that it stars Kendrick, Jake Johnson, Rosemarie DeWitt, Sam Rockwell, Brie Larson, Orlando Bloom, and Jenny Slate. Yeah.

Why we're excited: Read the above sentence.

About: Claire (Jennifer Aniston), a grieving mom who becomes obsessed with the suicide of Nina (Anna Kendrick) in her pain support group.

Why we're excited: Recent years have seen Aniston proving her dark comedy chops, and Cake , with Kendrick in the co-lead and a script off The Black List, could be hilarious.

About: The attempts of a college graduate (Miles Teller) and his friends to find jobs.

Why we're excited: Miles Teller, Anna Kendrick, and Bryan Cranston are starring in a movie together. This is the very definition of perfection.

About: A baker (James Corden) and his wife (Emily Blunt) who, after learning they've been cursed by a witch (Meryl Streep), embark on a journey to break the spell and encounter several characters from Grimm fairy tales along the way.

Why we're excited: Oh, let's see, just Kendrick, Streep, Blunt, Johnny Depp, Chris Pine... everyone you love is in this movie, and they'll be singing. It's going to be amazing.

To be released: Christmas 2014

About: The senior year antics of Beca (Kendrick) and Fat Amy (Rebel Wilson), two members of the Barden University a capella team, the Bellas.

Why we're excited: Is that even a question?