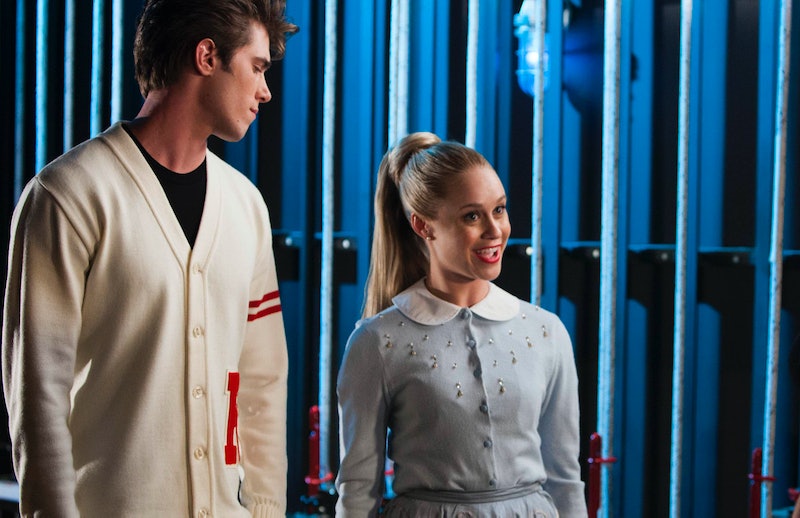 If you're anything like us, then your world fell apart a little when you heard the announcement that Glee Season 6 won't start until January of 2015. (Here's a handy master plan for how to cope with your separation anxiety in the eight long months between now and then.) While there are some things we already know about the show's final season, there's a lot that's still up in the air. The cast won't resume filming until August at the earliest (and perhaps later than usual this year, given the show's midseason premiere date), which means it's going to be a long time before we start getting any spoilers. So in the meantime, we've compiled a list of the dangling plot threads that we need to be wrapped up before Glee sings its way into television finale history.

Will Rachel ever be satisfied?

Lea Michele's Rachel Berry has been the star of Glee ever since she asserted to Mr. Schue in the pilot that "being a part of something special makes you special." Our little gold star has been searching for that something special ever since. After nearly five seasons, Rachel finally made her Broadway debut in the lead role of Funny Girl, only to get bored with her eight-shows-a-week schedule one episode later. The fickle songstress decided to try her hand at television, and was handed a development deal by FOX. Although we won't know the outcome of this deal until we see the Season 5 finale Tuesday, it looks likely that Rachel will be making the move to Los Angeles next season.

But the chances of Rachel feeling satisfied by being on a television seem slim if not even the bright lights of Broadway brought her happiness. So what will it take to bring this diva down to earth? Hints from showrunner Ryan Murphy and Michele herself suggest that the series will end with Rachel coming full circle: Back to Lima, Ohio. Michele said that Season 6 would find Rachel "in a location we’ve seen her in before, but in a very important role." As the newest coach of a revived New Directions, perhaps?

Will Blaine & Kurt ever actually get married?

Klaine has been one of Glee's "endgame" couples ever since they first kissed in the Season 2 episode "Original Song" — and since the passing of Cory Monteith/Finn Hudson made a Finchel happy ending impossible, they became the show's most important romantic pairing. While we're afraid that the Season 5 finale might see these lovebirds breaking up again, we're just as sure that they will finally tie the knot before the series finale. Or maybe during the series finale? Most protestations over their impending nuptials have been the fact that they're still teenagers. But if Season 6's time jump turns these kids into adults, a Klaine wedding would finally be a ceremony we can all get behind.

Will we ever see Santana and Brittany together again?

The last time this fan-favorite couple was onscreen together was in the second half of the show's 100th episode celebration, "New Directions." They then embarked on a prolonged romantic vacation together. Santana returned to NYC for Rachel's opening night, and fans were thrilled to hear that Brittany would also be returning for the season finale. But than Naya Rivera was mysteriously written out of the finale, which means that Santana left the show just as Brittany was coming back. With Rivera's status on the show still up in the air and Heather Morris hesitant to recommit to the show full-time due to her status as a new mother, we're horrified at the prospect that we may never see the happy ending these two lovebirds deserve. Please, writers, whatever you do, give us at least one episode of Brittana and their sweet lady kisses, just so we know they ended up together and happy.

Will Mercedes & Sam go the distance?

Glee doesn't have a great track record of long distance relationships. Pretty much every couple that's tried to stay together despite living in different cities has either fallen apart (Finchel, Brittana), cheated on each other (Klaine), or dissolved into thin air like they never happened (Artie/Kitty). So can we please have one example of a healthy LDR before the show ends? Look, we know it's hard. Most of us have tried it at one time or another. But it can work, and it would be nice if the writers acknowledged that. So let Mercedes go on her album promotional tour. And let Sam stay in NYC or move to LA and be a model. And let them stay together while doing it! Less repetitive relationship drama = a good thing.

Will the new kids make a comeback?

Let's be real. Marley, Jake, Ryder, Kitty, and Unique were never going to live up to the beloved original cast members they were replacing. And while some of them grew on us (Kitty) and some didn't (Marley), there's no denying the horrible send-off they were given this season. After being the focal point of Season 4, they were relegated to background characters and props for most of Season 5. They didn't get to sing a single song in either of the 100th celebration episodes, and they were sent on their not-so-merry way with one lackluster scene where they literally had to sweep the floors. While it's unlikely any of them will be coming back full time, it would be nice to see their contribution to the show acknowledged at some point. Murphy has promised that we'll at least "catch up with those characters again." Given that the last time we saw them they were despondent because their beloved glee club had been disbanded, it would be nice to know that they somehow ended up happy and fulfilled.

Will the teachers ever be relevant again?

It's weird to think that in Season 1, Mr. Schue's story was as important as any of the kids'. His relevance and that of any adults on the show has slowly declined over the course of the series into near nothingness. We haven't seen Emma since she got pregnant (she gave birth offscreen this season), the writers keep trying to shoehorn Sue into plots that don't make sense (falling in love on Rachel's opening night), and Will has been reduced to a saccharine manchild with no friends his own age. It remains to be seen how much these characters will be featured in the final season, but in our opinion, less will be more. If they each only return for one or two episodes, it should allow the writers to craft satisfying conclusions for them without coming up with inane excuses to shove them into episodes where they don't belong.

Will the black hole that sucks up McKinley students ever be discovered?

Matt Rutherford. Lauren Zizes. Rory Flanagan. Sugar Motta. Joe Hart. May all the victims of the black hole at the heart of their school rest in peace. The less important members of New Directions have a habit of disappearing when they're no longer needed by the writers. Will the last season of Glee center around Rachel and Schue's zany adventures while searching for the Great McKinley Student-Eating Black Hole? We can only hope.