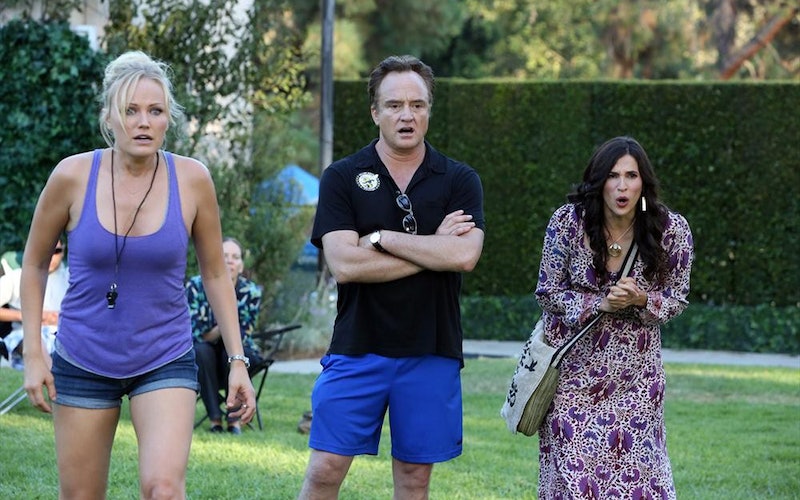 This fantastic ABC comedy starring Bradley Whitford and Malin Akerman, is by far the funniest new show on TV, but sadly, we learned last week that Trophy Wife had been canceled. The laughs weren't enough to convince the network to keep the critical darling around in spite of a dwindling audience.

And since ABC opted to cancel the poorly-titled comedy earlier this week, Tuesday’s episode will be the series finale. Live in denial with me a little while longer while I muse on what the Harrison family will be doing off screen now that ABC is done with them.

We didn’t see much of Pete’s work life in the series, but it was clear that the aging patriarch was running ragged between work and a busy home life. Pete will take a sabbatical from work and run both Kate and his kids crazy as he attempts to be more involved in their lives. This sabbatical will last all of one week. Kate will ask Jackie to come over and house sit and Pete will return to work.

On the other hand, Kate seemed very disappointed with not following through on her plans to finish college when she was at Jackie’s high school reunion. She’ll return to college, overload on classes and get wrapped up in being a college student before she realizes that she’s become too absorbed and neglected her family. She’ll then reduce her class load and attend part-time — a decision Diane will deride. Everyone will attend her graduation and there will be tears, and maybe even an approving grin from Diane.

Jackie (Michaela Watkins) will never change. Ever. She will remain the free spirit of the group. But somewhere in the future, one of her insane ideas will take off. No more selling pickles out of the trunk of her car — she’ll be making insane amounts of money and spending it just as fast. Bert (Albert Tsai), who has shown a weird affinity for money-making, will be her CFO. She will rise and fall in the span of two episodes. It will be epic. We’re already sad we won’t be there to see it.

Dr. Diane Buckley Will Have a Breakdown

Diane (Marcia Gay Harden) hasn’t shown many chinks in her armor and steely resolve, but her soft spot has always been her children. When Hillary goes off to college (more on that later), she will start overcompensating and attempt to focus all of her attention on Warren — things will go badly. She will then attempt to fix things in her love life but won’t be able to give all of herself because she still feels that her first marriage was her biggest failure. A breakdown is imminent. She will move in with Jackie briefly and experiment with yoga — leaving more than a couple of Jackie’s friends scarred from her brash wit.

The Kids Were Never “Okay”

The Harrison kids were some of the most entertaining kids on television. Overachieving goody-two-shoes Hillary (Bailee Madison) may not have been the smartest student on campus during her college visit, but that won’t stop her from dominating at the university. She will be the teacher’s pet of discussion in the faculty circles. She will join the university newspaper and assert herself into a power position by second quarter. She will make sure that every freshman student knows that she is the standard and then lord her superiority over them.

Meanwhile Warren (Ryan Lee) will finally make it off the bench on the all-girls field hockey team he joined and become an inspiration to a multitude of boys who have trouble fitting in. He will use this popularity to build an audience for his YouTube series with Bert. They’ll also be Vine stars. Pete and Diane will somehow get Warren to graduate high school and he’ll even find a girl to take to the prom — she will resemble Kate and it’ll freak everyone out, except Warren.

Bert, having served as CFO to Jackie’s company and continuing his ethically questionable side-businesses, will question why he needs to finish elementary school. He will raise a few objections and force Pete into a legally binding contract that stipulates that he will continue to attend school in exchange for two parties every six months, a car when he gets his permit, and an agreement that titles him the rights to his room forever and ever.

I thought knowing what they’d be up to in the future would help, but it hasn’t, has it? Trophy Wife had to battle against the title, a bad time slot, and a fickle television audience. Let’s be glad it lasted as long as it did.

More like this
'Heartstopper's Kit Connor Revealed His Hopes For Season 2
By Nola Ojomu and Sam Ramsden
'Gentleman Jack’s Cast & Crew Are Keen On Season 3, Too
By Frances Stewart
'Ghost In The Shell: SAC_2045' Was Only Supposed To Last Two Seasons
By Kadin Burnett
'Bridgerton' Season 4 Will Likely Focus On This Brother's Divided Heart
By Grace Wehniainen and Alyssa Lapid
Get Even More From Bustle — Sign Up For The Newsletter