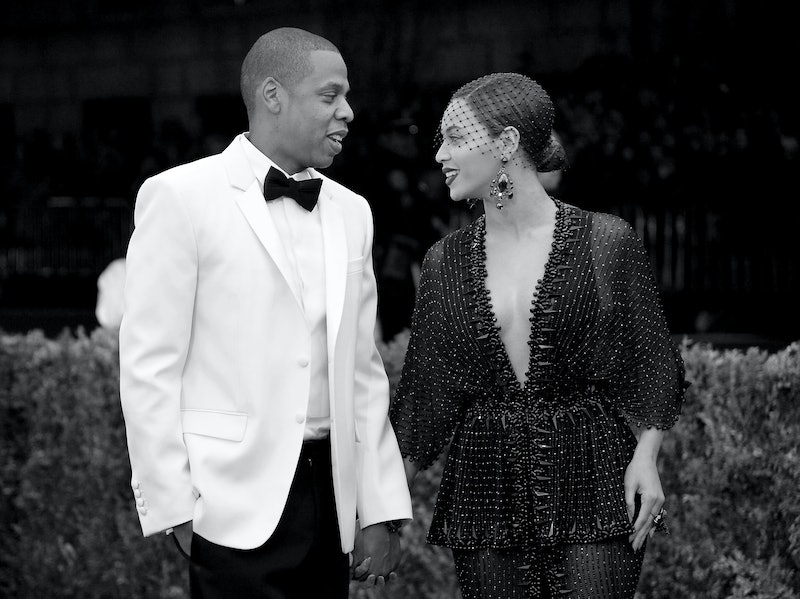 We, as a nation, have come to obsess over Beyoncé and Jay Z as the Ultimate Celebrity Coupling to End All Couplings. They're successful, attractive, confident human beings with talent for days and a mysterious air to boot. But just as much as we love to deify these incredibly successful humans, we also love to sneak even a glimpse of their nitty gritty; the things that normalize them on a humanistic level. We are divided in our reasoning for attaining the same goal of information in order to either relate to or condemn them based on how "normal" or "abnormal" their problems are in relation to our own. Which is exactly why we've plunged head-first down the Met Gala Solangate Rabbit Hole of Speculative Theory, which is kind of not-great on a few levels.

Now, speculating like crazy about things can be a lot of fun. Like, so much fun! (I've nearly made a career out of it.) "Wouldn't it be hilarious if they hired Olivia Pope to handle the kerfuffle?" "Don't you wonder how this will be written about vaguely in their respective songs?" "Imagine the Law & Order:SVU take on this whole thing! ""What would it look like if Solange and Beyoncé just started subtweeting each other like any run-of-the-mill passive aggressive sister duo?" "What if this whole thing was over the fact that like, Jay spoiled Game of Thrones for Solange?" And while all those bits of creative mind play, in their context, might be meant in good fun, once sent out into the world for mass consumption and individual interpretation, they can also become slightly irresponsible. Mainly by trivializing the experience and the violence in which these three people were involved.

It's yet another example of our weird, almost pathological desire to celebrate the woes of others in the name of making ourselves feel better. Trouble in paradise for Jay Z and Beyoncé, America's version of a Royal Couple? What fun! That means it's not just us — it can happen to everybody! But why do we need constant confirmation of such a universal fact? Doesn't that become boring after awhile? Shouldn't it be boring already?

But when one random person hears a random out-of-context thing, there's a scramble to try and put it into some sort of hypothetical context and call it under the guise of "news." It's no wonder that every single teeny, tiny move these three make in the aftermath of the elevator rumble gets called out, written about, meme'd to death, and then tossed on the pile as the next, likely not-at-all-salacious tidbit comes through the door for mass cannibalization into derivative muck. We are obsessed with other people's conflicts and, true to American form, love to play the role of Buttinski.

As a writer who almost always has her tongue planted firmly in-cheek, I took part in the digital rubbernecking at first. My favorite Knowles beat up Jay fucking Z? Of course I want to know about it! But beyond reading the initial reports and watching the video, it's frankly really silly to be this obsessed with the how and the why behind their fight. Families fight! Does their status make their fights more glamorous and therefore entertainment-worthy?

Maybe the whole fight started as nothing. Maybe Jay's one of those people that says Swifter instead of correctly pronouncing it Swiffer. Maybe he's obsessed with Swiffers as a tool of modern cleanliness and versatility. Maybe he talks about them all the time and it really drives Solange nuts. Wouldn't it make you nuts? At the apartment after a spill: 'Yo I'ma need a Swifter for this.' During a Brooklyn Nets game while the players are sweating all over the floor: 'They're going to need a lotta Swifters here tonight.' At her home in New Orleans: 'Yo Solange you ever run a Swifter over this floor?'

So when Jay maybe cracked wise about Solange dropping a drink — nearly all over Anna Wintour — while maybe dancing with her friend Janelle Monae, saying that she'd need a 'hell of a lot more than a Swifter to clean up that mess,' maybe Solange just lost it. Maybe every single time Jay repeated this egregious error and Solange corrected him — 'Swiffer! It's Swiffer! There's literally no T anywhere to be found in that word!' — she was met with nothing more than a smarmy eye roll from Jay. Maybe she'd had enough of Jay's jokes and eye rolls and needling and refusal to just say the damn word correctly, jeez and, coupled with the night's free-flowing booze, went apeshit on him. Or maybe Jay wants to do a hip-hop remake of Space Jam. Or maybe he's a climate change skeptic that also hates polar bears. Maybe!

But also maybe not. Maybe it's a lot more serious, or maybe it's a lot more juvenile. Which makes the kneejerk reaction to allow ourselves to be dismissive and reductive about the private lives of others because it's funny to us worth giving a second, critical glance. Because maybe, sometimes, we need to let the news come to us rather than making it up for funsies and unintentionally contributing to making someone else's life an overblown farce.