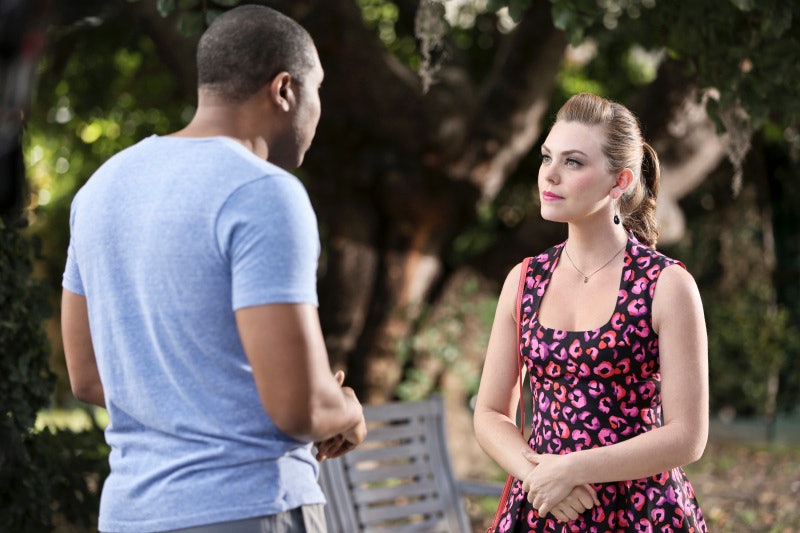 Bluebell really needs to get started on all of its relationship loose ends. Earlier this week we learned that The CW’s Hart of Dixie will return for Season 4 in 2015. And I, for one, as so happy about it. I’m just not ready to say goodbye to the Zade just yet — sorry, guys. But more importantly even than whether or not Zade is the endgame, will Mayor Lavon Hayes and Annabeth Nass get back together? And should he even try to get her back?

Last week’s episode — among other ridiculous Bluebell antics — had Annabeth’s new boyfriend Davis pop the question. Which was really exciting, considering she’s been waiting for a long time to settle down with the right guy after her first marriage failed. And she almost said yes, but she didn’t because Fancies caught on fire and kind of ruined the romantic moment. Coincidence? I think not. Symbolism that this engagement is doomed because Davis isn’t the right guy? I think so.

Now, don’t get me wrong — I’m happy for Annabeth and I want her to be happy. If she really does love Davis and she’s not just rushing into things because she’s desperate to walk down the aisle again, godspeed. But do we really want her to say yes? We’ve already come up with plenty of reasons why Annabeth and her former boyfriend Lavon belong together — so should he be trying to get her back?

For those of us who believe that Annabeth and Lavon had (and still kind of have) something really special, the answer to that question is a resounding "yes." But, on the other hand, Lavon isn’t really on the same page as Annabeth and is so not ready to give her what she needs — hence their break-up over not getting engaged. Perhaps her engagement to Davis will push Lavon to realize that, while Annabeth seemed to be rushing things a little, he took for granted a relationship that was overall pretty great? But, jealousy isn’t really a great reason to propose to your soulmate — just saying. So what should Lavon do?

The fact remains that Annabeth didn’t actually, 100 percent say yes to Davis last Friday. Sure, they got interrupted and it wasn’t necessarily her choice to say no. (It’s kind of hard to make a life-decision when the room around you is literally burning.) But did her initial hesitation (before the fire) suggest that she’s not too sure about this proposal either? I mean, she and Davis did just start dating a few episodes ago and here he is claiming that he wants to spend his life with her. Also, something about him having a jewelry dealer just rubs me the wrong way — but I’m probably just nitpicking now.

If (and that’s a big if) Annabeth isn’t too sure about this, then it’s definitely the right time for Lavon to swoop in. He could pull a very My Best Friend’s Wedding moment and confess to Annabeth that he never stopped loving her and that she should choose him because she is the love of his life. And I’m willing to bet it’d win Annabeth over in a second. Because, again, something about her relationship with Davis just seems off — starting with him pretending to be a hypochondriac just to get a date with her. (Faking a serious medical condition is weird. RED FLAG ALERT.) Every time Annabeth gushes about him, it seems more like she’s convincing herself that she’s in this great, new relationship than just bragging about it. It could be that she’s just settling for something because she knows Lavon is her soulmate.

But (and again, a big but) if Lavon’s not prepared to offer her the something more that Annabeth clearly deserves, he needs to let her go. Sure, it kills him to see her with a Gainey, but it’s not fair for him to expect her to give up what she’s found. I like Annabeth, so I don’t really believe that she’s with Davis just because — she already had a marriage that failed, I can’t see her just settling with some guy to stick it to Lavon. But it’s obvious that she’d be more than happy to accept his proposal if he were to bring one to her.

So what should he do? I'm all for Lavon making a grand romantic gesture and not letting the love of his life slip through his fingers. But he can only do that if he truly believes that she's the love of his life and he's ready to admit it (she is, by the way). If he broke up her engagement and he's still not ready to commit, it would be sheer selfishness and we don't want Lavon to be that way. He'll have to either get over himself or move on — because Annabeth doesn't deserve this crap.