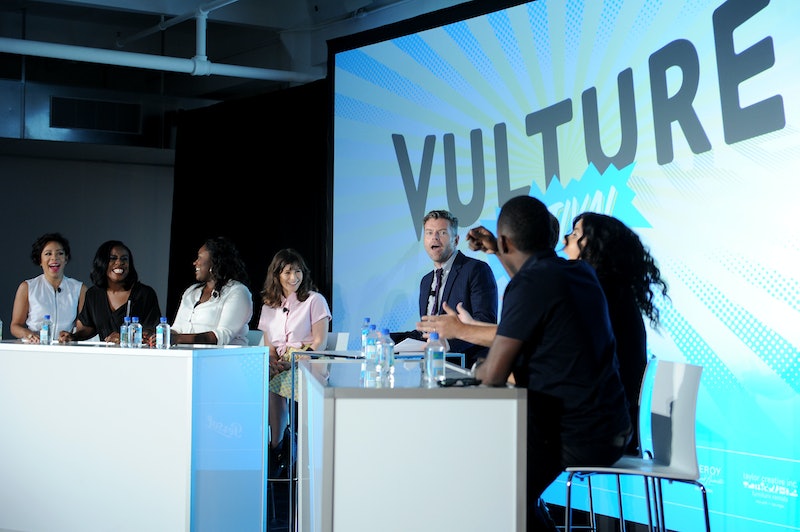 Orange is the New Black fans best know Yael Stone, Danielle Brooks, Uzo Aduba, and Selenis Levya as Lorna, Taystee, "Crazy Eyes," and Gloria, respectively, but to anyone in attendance at the Vulture Festival's Pop-Culture Trivia Night on Sunday, May 11 in New York City, these talented ladies had some new titles to behold: reigning pop culture trivia champions. Of course, no one realized that more than their competitors, Lamorne Morris (Winston from New Girl ), and Stephanie Beatriz and Joe Lo Truglio (Rosa and Boyle from Brooklyn Nine-Nine ), who were bested by the gals from OITNB. In fact, before the games even started Brooks boasted that she and her co-stars were definitely going to win. (Though, Morris agreed with a fan on Twitter that he and his Fox friends were "robbed", and after you watch the full video, you can decide for yourself. It's actually a pretty close call.)

Now, even if you're Team New Girl and/or Team Brooklyn Nine-Nine (or a fan of all three shows, like we are) there's no denying that not only are the ladies of OITNB an utter delight to watch off-screen, too, but these energetic actresses really knew their stuff and came ready to play. (They correctly answered a wide range of trivia, with everything from singing the lyrics to TLC's "Creep" to guessing bird-related pop culture titles like The Partridge Family.) Looks like Netflix really is ahead of the curve now.

If you've got the time (the whole thing clocks in at a little over 80 minutes) you can watch the entire entertaining competition, which was hosted by Dave Holmes and included games like a pop culture spelling bee and guessing movies and TV shows based on IMDB keywords alone (much harder than you'd think). Check it out:

So, there you have it, Orange is the New Black is "better" than New Girl and Brooklyn Nine-Nine...at least when it comes to trivia.