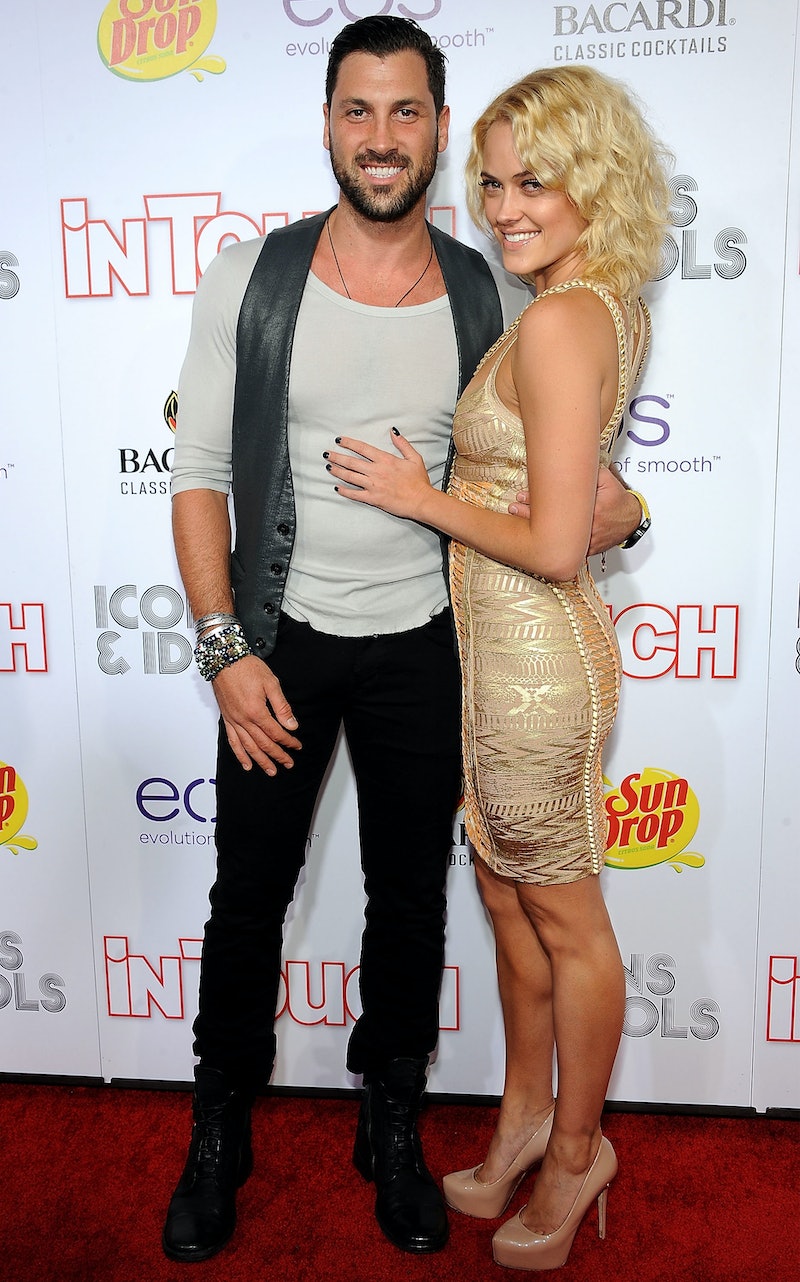 Have you heard the latest Dancing With the Stars news? No, not that Candace Cameron Bure beat out James Maslow for the #3 spot in the final — I think we’re all clear that they were competing for bronze — and not that P!NK is suing Derrick Hough for aerial acrobatics infringement…no, the latest news, that is definitely true, and totally founded in fact, is that Peta Murgatroyd, sometimes dancer, sometimes post-apacolyptic dominatrix, is attempting to win back the love of ex-boyfriend, Maks Chmerkovskiy, sometimes bad boy, sometimes teddy bear. But you see, Maks has recently found the love of his life, soul mate, calmer of even the sassiest tantrums: his dance partner and potential Disney princess reincarnated, Meryl Davis.

As the basic-cable-possessing-nation’s OTP, Meryl and Maks cannot be broken apart; theirs is a love fated by the gods. And yet, it will obviously be tested by the likes of that pesky Peta Murgatroyd, and any number of other potential schemers. Maks has taken many a lover, after all, and now that they’ve seen that his bad boys ways can be willed into submission simply by a therapeutic hand-holding session, they want back in. Consider this a warning of all of the other potential threats to the epic love affair of Maks & Meryl.

Potential threats could include, but are not limited to, Kate "The Other Woman" Upton, Erin "The Inside Job" Andrews, Karina "You Had Your Chance" Smirnoff, and Willa "You Wanna Be Bad" Ford. They are only to be trusted in Maks' presence under the close supervision of Tom Bergeron. Expect a similar approach to Ms. Murgatroyd's: pretending to date someone else publicly in order to make Maks jealous and swoop in when sweet, sweet Meryl is least expecting it.

In week 8 of DWTS, Maks and Val Chmerkovskiy's grandmother dropped by to supervise their joint-dance with partners, Meryl (soulmate) and Danica (not soulmate). She made it clear that Maks was her favorite grandson, and we all know grandmother's can be a little protective of their favorites. Hopefully she'll play it cool because she's got tender-hearted-Val to keep an eye on, but listen out for mumblings of, "She's not good for my little Maks-y," just in case.

All Season 18 competitors have been privy to the Maks that Meryl Built: the softer Maks, the choreography-ass-kicking Maks, the in it to win it Maks. No one can be expected to resist a Chmerkovskiy at his best. Expected threats are most likely, but not limited to, Nene Leakes, Danica McKellar, Diana Niyad...and I'd keep an eye on that Drew Carey, too.

Len is like the Tin Man inside, but you've always got to look out for Carrie Ann and Bruno...those two are more sexually charged than an inflatable at a Miley Cyrus concert. Not to mention, Maks recently bestowed the whole panel with kisses that could have been misconstrued, especially considering all the not-kissing Maks has been taking part in lately.

Andi from The Bachelorette

If there are two things we can be of sure of about Andi's new season of The Bachelorette, it's that she will not be marrying any of those bros, and she will find her way to the DWTS stage...they always do. Andi has likely been loitering around the ABC lots, sizing up other potential suitors after her Home Visits revealed that her Final 2 of 25 boyfriends were actually cyborgs, created in a lab for their muscles to bulge out of suits, and drink ambiguous alcohols at cocktail parties. And then there's Maks: roaming around, looking effortlessly handsome in his dance pants, exuding masculine energy. How could she not pounce? I cannot state how little Andi is to be trusted.