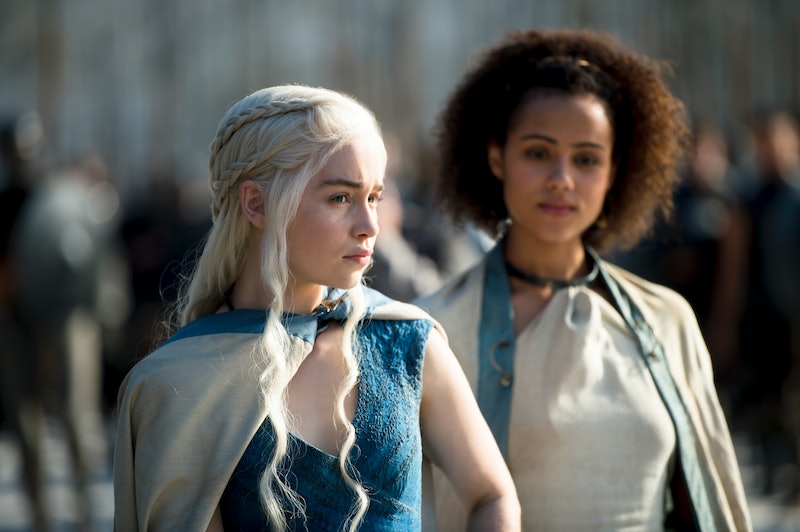 She's a grown woman now and she'll inspire you to be one, too. The Game of Thrones Season 4 finale will air on June 15 and it'd be impossible not to acknowledge all that Emilia Clarke's Daenerys Targaryen has accomplished since Season 1, especially after all that she’s been through and had to overcome. And, at the same, time it'd be a complete injustice to not credit her with being a badass and inspiring female lead in a world where feminist is still considered a bad word. Daenerys is tough — which we already knew, but when Dany kicked Ser Jorah out on his ass she reenforced that — and she knows exactly what she deserves.

I’m not saying that she’s the perfect role model — no one on GoT really is. But Daenerys is clearly doing something right: she's been resilient, she's been strong, she's made it her goal to right the wrongs of the world and well, she ended up a Khaleesi when she started out as being little more than a sex slave. But aside from all of that, there's one thing the Mother of Dragons has been exceptional at over the past four seasons: commanding, captivating, and empowering us with her words.

I’m not going to quote “Dracarys” — because, while epic, it’s not nearly the most iconic thing the Mother of Dragons has said. Instead, here are 7 Daenerys Targaryen quotes that will empower you to be a better woman.

Don't Be Ashamed Of Your Gender

"Woman? Is that meant to insult me? I would return the slap, if I took you for a man."

Acknowledge The Advantages Of Your Gender

Okay, fine. This is an extremely literal interpretation of the statement, but heck, on GoT she might actually have an advantage. (I know that "men" is the all-encompassing word to describe the human race. Damn patriarchy.)

Know How You Deserve To Be Treated

"I am a Khaleesi of the Dothraki! I am the wife of the great Khal and I carry his son inside me! The next time you raise a hand to me will be the last time you have hands."

And if someone can't handle that, they have to go.

Work For What You Want

"I am Daenerys Stormborn and I will take what is mine with fire and blood."

Getting what you want isn't easy — and you shouldn't expect it to be. Hard work pays off.

"I am not your little princess."

You're not a delicate, little china doll — you're woman and they will hear you roar.

"I am no ordinary woman, my dreams come true."

If there's anything Daenerys has done right, it's that she has never underestimated herself. She's coming out of nowhere, with no training in commanding an army, and she's going to get her throne back. If she can do it, so can you.

Don't Be Ashamed Of Who You Are

"These are my people now. You shouldn't call them savages."

I mean, I guess it's not hard for Daenerys to feel closer to the Dothraki than Viserys. But even so, loyalty is admirable.