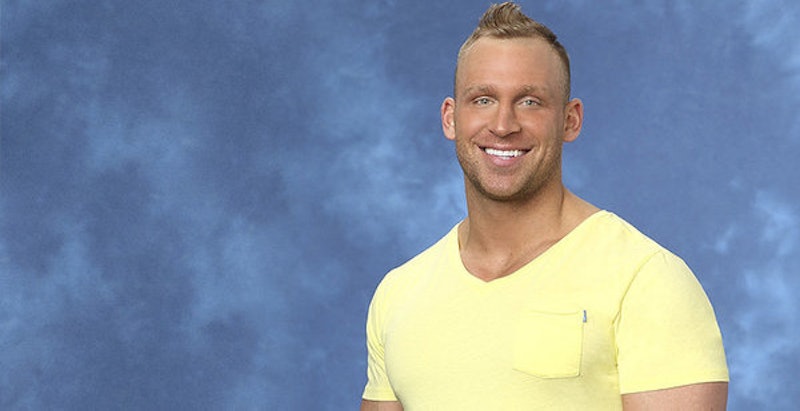 In a very unsurprising move, The Bachelorette contestant Cody Sattler is appearing on Bachelor in Paradise. After Andi Dorfman sent him home last week (about five weeks later than she should have) we thought we'd seen the last of the personal trainer/Sean Lowe lookalike. But just because he wasn't right for Andi, doesn't mean he wasn't right for reality TV. In all honesty, Cody was basically made for the ABC summer spinoff, and he'll see his second chance at love and TV fame realized this August when the show premieres. His move to Bachelor in Paradise will have him joining fellow contestant Marquel Martin and a host of other Bachelor and Bachelorette fan favorites and villains. One more guy from Andi's season will eventually head over to the show as well, but who it is remains a mystery.

For now at least, Cody will have a chance to find a TV love after all. I mean, what says lasting romance better than a booze-fueled island setting? Since Cody was on the Bachelorette season full of frat boys, any of Andi's competitors would have been good choices to head to the Bachelor Pad replacement show. But Cody was especially perfect for the show and here are six reasons why.

HE HAS A BEACH BODY

Bachelor in Paradise is set on an island which means lots of ocean time, pool time, jacuzzi time, etc. Basically the girls are going to live in bikinis and the guys aren't going to need to pack shirts. Fortunately for Cody, he spends his days getting ripped just for this kind of shirtless opportunity.

HE IS LOOKING FOR LOVE

Cody was disappointed that Andi sent him home, but I think it was more about the fact that he was rejected than that he was actually into her. Since Andi wasn't his soul mate after all, he'll benefit from having a lot of ladies to choose from on the show. Since he looks just like Sean Lowe, maybe he can snag one of the women from Sean's season since there will be three of them on the show with him.

HE HAS POTENTIAL FOR VILLAINRY

Bachelor in Paradise isn't all lovey-dovey. As evidenced by the promo video there will be fights and tears, so you have to have a little more to you than just "I want to find love" sensitivity. Cody can be kind of a jerk at times. He fought with Nick and says he doesn't have tattoos because "you don't put bumper stickers on a Mercedes." So he's got kind of a cocky side to him which will allow him to stay in the game and not get steamrolled by the rest of the men on the show.

HE HAS SURPRISES UP HIS SLEEVE

In addition to being a personal trainer, Cody tutors kids. That's right, you can hire him to teach your child vocabulary, English and prealgebra. There's way more than meets the eye with this guy, and goodness knows Bachelor producers love a little intrigue.

Cody's Bachelorette fact sheet informs us that when he has to choose between "adventurous or conservative" he picks adventurous. That's pretty obvious judging by this photo of him biking to work in the frigid Chicago winter. A sense of adventure will be key for Bachelor in Paradise since it's a whole new environment with new people and filmed in a jungle-like location.

To make it in the Bachelor world you have to give good interviews. You can't just say your date was "great" or you really like someone because they're "cool." Viewers demand details and thankfully Cody likes to share and share and share. On his Facebook page you can see Cody's innermost thoughts.

For example, his feelings about laundry day:

Going to get my laundry and a pizza delivery guy jumps in the elevator with me! C'mon man! #nowiwantpizza

Someday I will have a legit garden! I am talking legit!

And a few of his favorite things:

>My bike>My backpack>My headphones .....I don't go anywhere without them!

If he can carry that overshare attitude to his Bachelor in Paradise interviews he'll be ABC's golden child. That show was made for Cody. Whether that means he finds his soulmate or not — we don't know. But we do know he has everything it takes to be a good contestant and have a fun time. So at least he has that going for him.