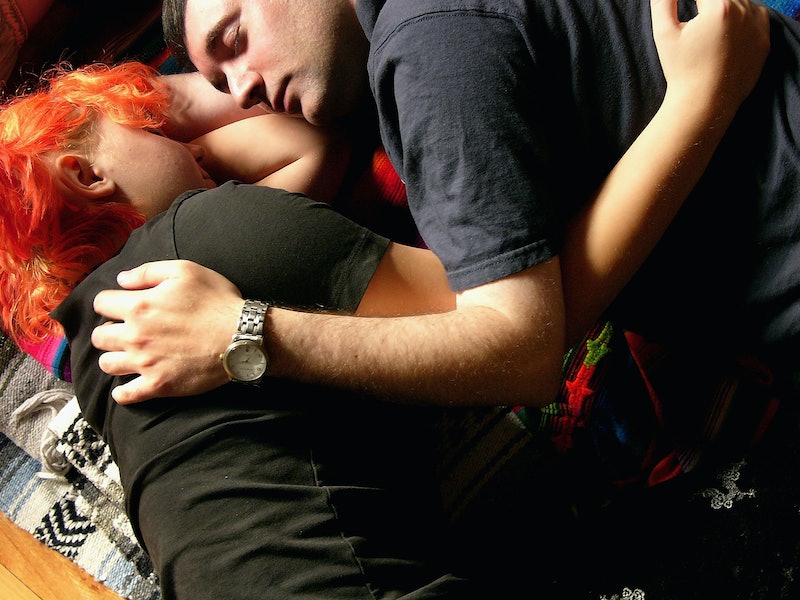 I always thought I had an extremely high sex drive until I met my husband, who I’m pretty sure could do it a dozen times a day and never get sick of it. This isn’t to suggest I’m some sort of champ in the sack, but it does suggest, or rather confirm, that he genuinely loves sex. A lot.

It’s not that I don’t like sex, because I love it. I really do! But I feel the access is too easy. It was one thing when I was single and getting laid was a game in which you’d win or break even, but now that I can have it literally all the time, whenever or wherever, I’m spoiled and some days indifferent to it. Granted, my husband is the best sex of my life — I mean, why else would I throw in the towel on the fun of being single? — but some days/nights I’d just rather pass. It’s not as if my library of books are going to read themselves, right?

So I decided to conduct a little experiment, for science, of course. Instead of enjoying the great sex that I have with my husband, I passed on his advances for seven nights in a row, each night giving him some ridiculously stereotypical line as to why we wouldn't be getting it on that evening. I wanted to see what it felt like to put a pause on that particular type of intimacy, and I wanted to see how he, and our relationship, would react to the drought.

It wasn’t exactly easy, but as I said, it was in the name of science. Below are my excuses and his confused, annoyed, and slightly shocked responses.

As someone who writes about sex fairly often and has written about how having sex can actually be good for a headache, this one perplexed him.

His response: “What do you mean you have a headache? You’ve said time and time again that sex is great for a headache. You’ve said it was proven with research. “

I had to explain the difference between a regular ol’ headache that can be temporarily cured by a romp and a migraine. Since I legitimately get migraines about a half-dozen times of year, this one seemed plausible, and he offered to get me some Advil so I wouldn’t have to get up.

I’m tired a lot. I have horrible sleeping habits, drink too much water so I’m up every 30 minutes, and have far too many nightmares. And as we all know, having sex, at least good sex, requires some effort and energy.

His response: “Well, you can just lay there and I’ll do all the work. Wouldn’t that be nice for you? I’d like someone to do that to me.”

It was then I had to remind him about the time I was so exhausted that I fell asleep mid-intercourse, started to snore, and both killed the mood and his self-esteem for the next few days. That painful reminder had him back down.

His response: “But you just had your period.” (Which was true.) “How can you still have it? Did it come back? When will it be gone? Is it almost gone? Maybe we can do it a little bit.”

I’m not sure what constitutes a “little bit” because I was forced to avoid his eyes and roll away from him. He was very sad and confused and, honestly, a bit suspicious, especially because when I do have my period, it lasts all of 24 hours.

His response: “Are you joking or what? I could have done it for you. You know I love to make you come. Are you mad at me?"

His disappointment in me, as I could see in his eyes, was reaching new heights. I’m pretty sure he would have been more accepting if I’d sold his cat on Craigslist.

This one wasn’t totally a lie. As I’ve written, I’m rocking a bit of love weight, and although I’m learning to accept it, some days I just don’t want to get all nekkid, even in front of him.

His response: “But you’re beautiful! I love you! You’re the most beautiful woman in the world! And I love your sexy belly! Please let me make love to you!”

Ugh. I always have to assume that his use of the term “make love” is because he’s French, but for me, even if I had been in the mood, that boner-killer phrase would have murdered it right then and there. However, I was really excited to hear that he thinks my belly is sexy. Personally, I just think it looks like a squishy basketball.

I knew this one would cut deep.

I don’t think I’m alone on this — when I’ve just showered, I don't necessarily want to get all sweaty again.

His response: “Come on! You can have a shower again afterward! I want to be close to you! Don’t you to be close to me?!” (Answer: Yes.) "We can shower together when we're done! Come on!"

Me: “We’ll have sex tomorrow. I promise.”

Seven days without sex isn’t easy, but at the same time, it was interesting to see my husband’s reaction to each excuse to not have sex, as if I were the first woman to ever utter them. He was visibly perplexed by it all, but never once pushed the topic more than a few lines of pleading. I call that both restraint and respect.

What became clearer than ever is that sex is essential in every healthy relationship. It pained me to not be intimate with him for so long, as much as my sex drive isn’t what it used to be. Our usual bickering became more intense, and by day five I wanted to tell him the jig was up and tear his clothes from him. But, as any good researcher, I kept pushing forward.

Takeaway? When it comes to sex, even the most obvious overused excuses to avoid doing it fall on deaf ears. I’m pretty sure if I did it again for another seven days, he still wouldn’t get it. I mean, “I have a headache” is one of the oldest excuses in the book! But alas, he just wasn’t hearing it; he just wanted to get some. And I really don't blame him.