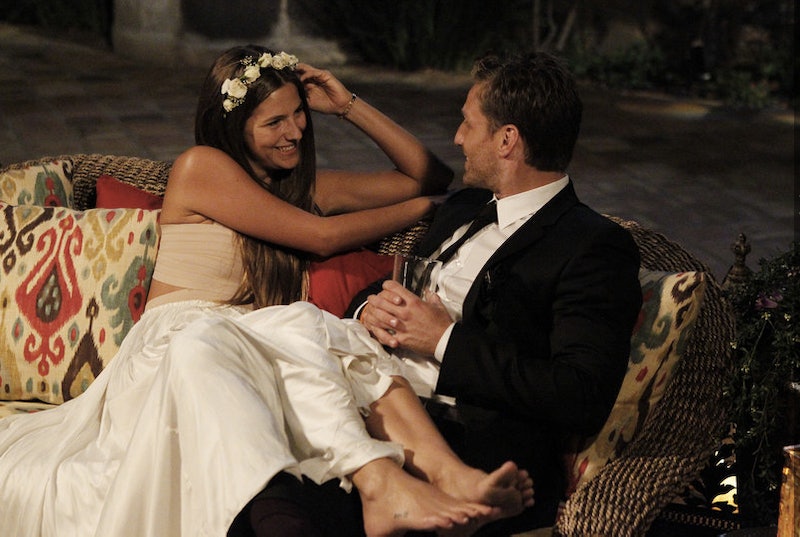 The Bachelorette is winding down, but a new Bachelor/ette spinoff is getting ready for its series premiere on Aug. 4. Bachelor in Paradise has revealed its full cast as well as a surprise twist. Well, it's not exactly a surprise twist seeing as this is the first season of this show but, ya know, The Bachelor likes to be dramatic. According to People, "14 former Bachelor stars will arrive at the tropical destination to spend time getting to know each other, but at the end of the night only six men will hand out roses — leaving two women flowerless and on a flight back home." Did you gasp even though there was no precedent set that said this wouldn't be the case? I know I did!

Following that, things really get crazy.

After the first night, each episode brings two new Bachelor alum members into the mix, alternating between men and women for seven weeks, as viewers watch old romances being rekindled and new sparks being ignited.

From what I can gather, this means that there will always been 14 people living it up in Tulum, Mexico and that the people giving out the roses will alternate between men and women each week. Long stems AND boutonnières? Oh snap, y'all!

So who will you be following on this journey? We already know who some of the original 14 men and women will be, but now the newbies have been added to the mix, and some of them are very exciting. (Spoiler alert: I mean Lucy "The Free Spirit" Aragon is exciting. The rest pale in comparison.)

As for those who will be making not-so-surprise appearances as the show goes on, we have:

Best known for: Having the job title "Free Spirit" on Juan Pablo Galavis' season. Penning a song called "Ess Okay" in honor of the series' most annoying Bachelor.

Best known for: Making it to Hometowns on Emily Maynard's season, competing on Bachelor Pad, and crashing Andi's meet-and-greet cocktail party on the current season. Techincally, Bachelor in Paradise will be his fourth Bachelor show.

Best known for: Being the front-runner (and most normal contestant) on Desiree Hartsock's season , but leaving during Fantasy Suites and breaking her heart.

Best known for: Only making it to the third week on Juan Pablo's season.

Best known for: Being very sweet on Andi's season but not getting very far because she has a thing for baseball players and possible villains.

Best known for: Endearingly wearing Converse with his suit, but not impressing Desiree enough to stay on the show very long.

Best known for: Making it to week seven on Jillian Harris' Bachelorette, participating in the first season of Bachelor Pad, hooking up with Elizabeth Kitt on Bachelor Pad on the hood of a car. Sounds like Bachelor in Paradise material!

Best known for: Getting kicked off during a two-on-one date on Sean Lowe's season aka the worst way to leave The Bachelor.

Best known for: Not ever speaking on Juan Pablo's season. I started calling her "No Screen Time Danielle." If she makes it past the first rose ceremony on Bachelor in Paradise, I'll be shocked.

Best known for: Being the super buff, super blonde one on Andi's season. This show is basically made for him.

So there you have it! Those are all the folks you can expect when Bachelor in Paradise premieres. Come August, you better be ready for some fun, romance, and Lucy the Free Spirit's boobs. Huzzah!