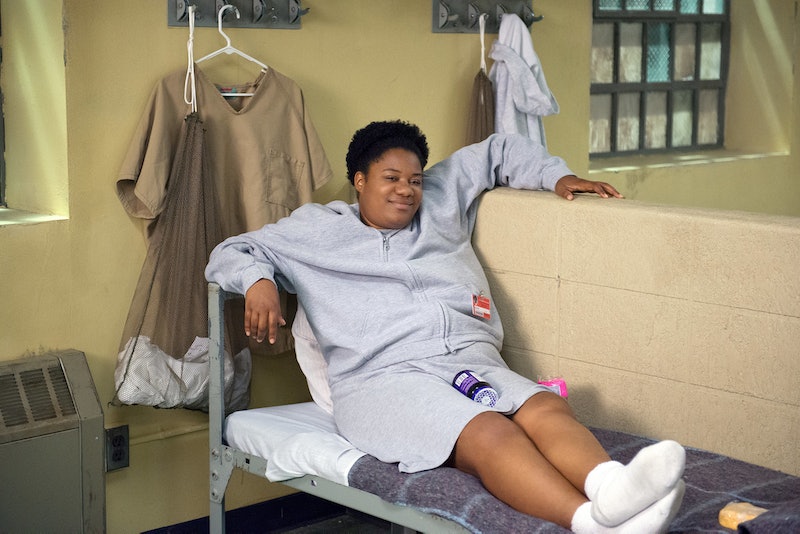 The first thing you notice about Adrienne C. Moore upon meeting her is her hair. It's short, pretty, and well taken care of, nothing like the dueling buns she sports as Black Cindy on Orange is the New Black. The second is her politeness, the opposite of the attitude of her blunt, brazen character: profuse thanks after being handed a cup of water, surprise at being given "the red carpet treatment," as she puts it, as if an OITNB star walking into a office filled with female, pop culture-loving writers wouldn't elicit a few freak-outs. The third is that she is excited, about everything from Orange to the weather to the pizza place across the street ("I'm a pepperoni kind of girl") — and that's before we even get to talking about the show's 12 Emmy nominations.

And for good reason. Anyone who's seen even one episode of Orange knows that it's one of the best, most innovative shows on TV. It's no wonder it got so many nominations, or that it's likely the highest-rated show on Netflix, or that because of it, its cast members have gone on to do everything from starring in Funny or Die sketches to gracing the cover of Time ; Orange, only two season in, is already a phenomenon.

And it's only getting better, at least according to Moore.

"Season three is off to a fantastic start," she says. "You know, with so many great television shows that are out there, you just cross your fingers that the second, and the third, and the fourth seasons will be just as strong, if not better, than the season that preceded it... to be proud of your work is the biggest gift."

Moore certainly doesn't take it for granted. When Orange began, she was an actress with just three credits to her name and a background in theater, not TV. Her castmates were people like Kate Mulgrew, Laura Prepon, and Taryn Manning, women with mile-long resumes and ready-made fan-bases.

"I came in day one just being so tremendously blessed to be in the show," Moore recalls, adding that it was Jenji Kohan's involvement that got her to audition. A "huge fan" of the showrunner, Moore remembers desperately wanting to get cast on the series, but trying not to get her hopes up too high.

"It's the life of a New York actor that you sort of become accustomed to rejection," she says.

When she learned that she'd gotten the part, though, she happily let the enormity of the news sink in.

As Black Cindy, the brazen, loud-mouthed comic relief of Orange season one, Moore stole scene after scene, becoming a fan favorite and one of the show's best surprises. This past year, Cindy was given a larger role, and in May, Moore was promoted to a series regular for the show's upcoming third season.

"It was a huge honor," she says. "I said to them, if I could come back again, I’ll come back again, and next thing I know, they kept writing for me… it’s a huge blessing to continue to be a part of this and to play with them every day."

Much of that can be attributed to the bond between Moore and her co-stars; she describes them as her "sisters," and says that through her time on the show, she's fostered "friendships and family for a lifetime." A larger part, though, is due to the show itself.

"It's opened so many doors for women of color," Moore says, "and not just speaking for African-Americans, but we have Latina women and Asian women as well – it's just opening up opportunities for them to work and tell their stories."

"There's a lot of talented women," she says, adding that even today, there's still a stigma about women — especially women of color — who voice their opinions.

"I think a lot of times when women start speaking, people get threatened by it, like an 'ugh, know your place' kind of thing," Moore says. "I know we’re far from those days, but still, there are little remnants of that, and we see them. We know them."

Orange, though, is giving women "a platform to have a strong voice, a really opinionated voice, and say some very thought-provoking things."

And, due to its realistic, no-holds-barred portrayal of women's prisons, it's also prompted discussions on issues ranging from racial profiling to solitary confinement.

"Once you become aware of how prisoners are treated, or the difference in sentencing between African-Americans or people of color versus Caucasian prisoners, it's hard to plead ignorant," Moore says. "As cast members... we try to help out, as much as our schedules can commit."

Moore credits both the show's creator, Jenji Kohan and the real Piper Kerman, now an activist, for making sure the series "stays on track" with its realism. By combining entertainment and education, Moore says, Orange takes on an importance not held by most other shows.

"It makes you realize, this is really going on," she says.

"It was interesting to work on two prison pieces," she says, although she admits that balancing both projects had its drawbacks.

Perhaps not with another show set in jail — two is probably enough — but definitely with a project that's more than just pure entertainment.

"I try to find pieces... that are teaching me something, so I can therefore teach the audience something," Moore says. "We tell these stories, so hopefully, they don’t happen again."

More like this
Melanie Lynskey Plays A “Ruthless Leader” In 'The Last Of Us'
By Brad Witter
Pedro Pascal Barely Got Through The "Lisa From Temecula" 'SNL' Sketch
By Stephanie Topacio Long
Grammys Host Trevor Noah Made Adele's Dream Of Meeting The Rock Come True
By Brad Witter
Keyla Monterroso Mejia Is Finally The Star Of The Show
By Gabrielle Bondi
Get Even More From Bustle — Sign Up For The Newsletter
From hair trends to relationship advice, our daily newsletter has everything you need to sound like a person who’s on TikTok, even if you aren’t.