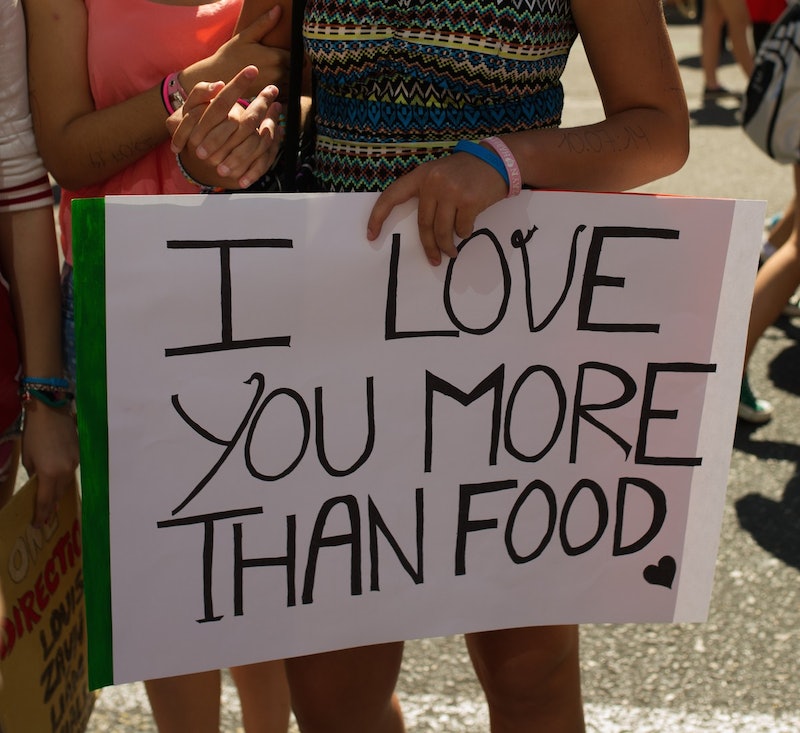 Try to think back to what life was like four years ago. No one knew the sweet sound of Siri's voice, the cronut was still just a fantasy, and the world had yet to be graced with the five young men who would forever change everyone's lives and ears: One Direction. That's right, Directioners, the boy band who has relentlessly invaded radio stations, caused scandals, brought back man-buns, and an endless amount of fangirling is celebrating a pretty big milestone — One Direction is four years old.

While 1D haters might be grumbling that Niall, Harry, Liam, Zayn, and Louis are still covering every conceivable notebook, t-shirt, and bedroom wall of every girl under 17 (*cough* and over 17 *cough*), the band definitely doesn't look like they're going anywhere anytime soon. Twitter erupted with a flurry of 1D hashtags on July 23 to celebrate the momentous occasion, like #4YearsAgo5StrangersBecame5Brothers and #4YearsOfOneDirection, and it's just proof that One Direction has, if at the very least, a whole lot of staying power. Keep your haterade to yourself, everyone, because the boys from Britain are the new boys from Boston. (If you're too young to get that reference, Google 'New Kids On The Block' while I sit here and stare at my gray hair and wrinkles.)

Directioners are a rare breed of fan (read: borderline insane), and throughout the reign of One Direction, its fandom has seen its fair share of meltdowns and total freak-outs, most of which take place all over Twitter for everyone's enjoyment. Which one was the craziest? Do they even hold a candle to Beliebers? Hold on to your autographed bottles of Our Moment, people, because we’re about to enter 1D crazy town.

When Harry Styles "accidentally" favorited a pornographic tweet, Directioners latched on to the hashtag like rabid dogs on a juicy, boy-band-flavored bone. Fan reactions ranged from reasonable:

To being, like, kind of passive aggressive towards these puppies and kittens:

If you haven't heard, Hailie Mathers just graduated high school. If that makes you feel like an ancient dinosaur using a walker, here's something that might cheer you up: When she was 16, she thought her soul mate was Harry Styles, and because of that, decided to tweet many choice words about his then-girlfriend, perpetual good-girl Taylor Swift, in an epic, passionate Twitter rage. What were these things, you might wonder? Well, they weren't what someone would typically say about goody-goody two shoes Swift. Hailie told Swift to stop "whoring around" and lay off her man. The tweets were quickly deleted, much to everyone's devastation. Okay, back to crying about how old you feel.

3. Beliebers & Directioners Fight To The Death

It's no secret that the legions of fans who worship Justin Bieber and One Direction can get a little, shall we say, "testy" when their idols are threatened, and when it comes to duking it out on social media, they don't hold back. In an effort to have their faves take home an award at the World Music Awards, fans let loose on Twitter.

Tonight, on Boy Band vs. Boy Band! One Direction and The Wanted, as well as seemingly every single one of their dedicated fans, got into a vicious war of words on Twitter when 1D's Zayn Malik threw an insult at The Wanted's Max George.

Max initially tweeted this pic with Gangnam master Psy out to the masses...

...to which Zayn lovingly responded:

And then all hell broke loose! Other band members got involved...

And all of the fans' worlds imploded, as expected.

They may have the voices of angels and the hair of Fabio, but the boys of 1D had something else when a video of band members Zayn and Louis deciding to smoke what looked like a joint in the back of an SUV in Peru leaked: total insanity.

The reactions ranged from total elation at how drop-dead gorgeous Zayn looked blowing the smoke, to fans cutting themselves in an effort to convince the boys to stop using drugs, using the disturbing Twitter tag #CutFor1D. Liam eventually issued an apology to stop the madness, and everyone went back to loving them as per usual.

So there you have it: the crazy online world of One Direction. Here's hoping they have a long run... if only for the tweets.