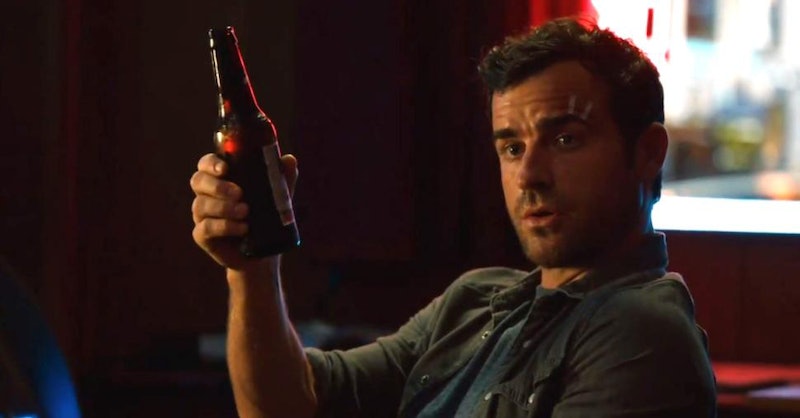 Kevin Garvey, the protagonist of HBO's The Leftovers , underwent some pretty drastic changes in the course of Damon Lindelof's adaptation of Tom Perrotta's novel. If Book Kevin and TV Kevin met on the street, they wouldn't even recognize each other. The Kevin we know from HBO's version is a brooding, quick-tempered mess — which is understandable, given that both Kevin Garvey's wife and his son left him for two different cults. (That's gotta sting.) But it seems this Kevin was a mess long before 140 million people vanished off the face of the earth.

In the series premiere, when a stranger in a bar asks him where he was during The Departure, Kevin quickly flashes to a memory of having sex with a woman whose face we couldn't make out. So when he responded that he was at his house cleaning the gutters, we knew he was lying, and it was safe to assume that the mystery woman wasn't his wife, Laurie. Sure enough, in the most recent episode, Kevin confessed to Nora Durst that he had cheated on Laurie — but we still don't know the identity of his mystery mistress.

Let's run down a quick list of possibilities, shall we? (Of course, it could turn out that Kevin's mistress was just some random person whose identity doesn't really matter to the plot of the show. But that would be so boring.)

Until the fourth episode, Kevin and Nora hadn't crossed paths onscreen, so it was very possible that she was the one in his bed three years ago. However, the two characters officially met last week at the town dance, and it became clear they had never met before. Cross this one off the list.

Aimee, classmate of Kevin's daughter Jill, has been very flirtatious around her BFF's hunky dad; and she's apparently been crashing at their place for quite some time. The show hasn't really explained why or when Aimee came to stay with the Garveys, but if it follows the book, then it wasn't until after The Departure — which means the likelihood of her sleeping with Kevin before it happened is pretty low. Although that would make for a surprising twist.

I know, I know. This one seems pretty unlikely. But bear with me: We've only seen Kevin and Meg in a scene together once, and there's actually nothing in their interaction that implies they've never met before. Sure, he asks Meg her name, but if she'd been a one-night stand three years ago, he very well could have forgotten — or never known it in the first place. And they wouldn't want to bring up their infidelity in front of a room of cops and cult members. She still seems like far from the ideal candidate, but it's technically possible.

The strongest point against the Mapleton Mayor being in Kevin's bed that day is that she bears no resemblance to the woman in the flashback. Although we couldn't see her face, she had longer hair than Lucy and was obviously caucasian. But maybe they hadn't decided on who Kevin's mistress would be at that point, and that actress was simply a placeholder. The strongest point for Lucy being in Kevin's bed is the juicy drama that would result from that revelation. Mayor Warburton is currently in a relationship with Kevin's lunatic father — did she sleep with Kevin, Jr. before his father? Or did she cheat on Kevin, Sr. with his son? What is the true extent of her relationship with the Garveys? Whether or not Lucy was the woman having sex with Kevin, there's definitely more about her involvement with both Kevins that we have yet to learn.

If we had to put our money down on one option right now, we would bet that the reason Kevin lied to the stranger in the bar about where he was during The Departure was because the woman he was sleeping with was actually one of The Departed. How crazy would it be if the person you were having sex with suddenly vanished into thin air in front of your eyes? This would certainly explain lots of things, including why he was so cagey with his answer, why he's still such a mess three years after The Departure, and why he continues to feel like he's going crazy. An event that bizarre and inexplicable would continue to have profound ramifications even several years later. Maybe we can all forgive Kevin a bit of his insanity when it's finally revealed that his mistress vaporized mid-coitus.