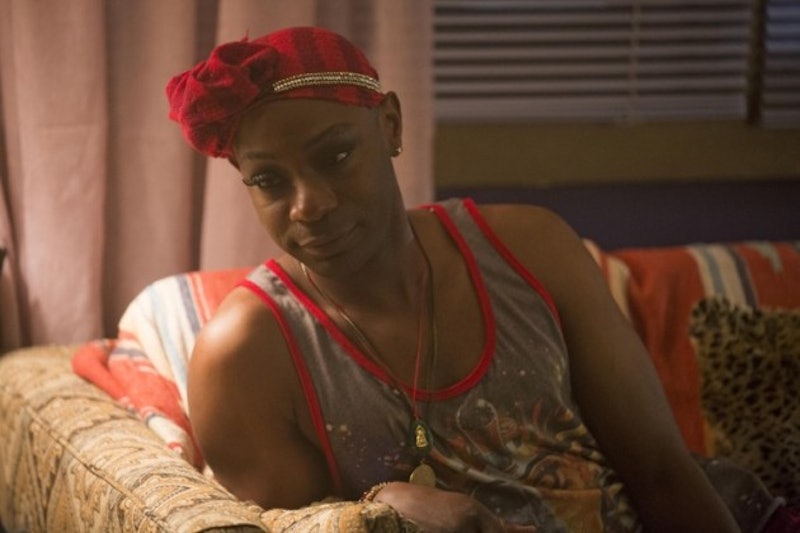 Characters have been dropping like flies on Season 7 of True Blood — but those writers better leave True Blood's beloved Lafayette alone. Listen, I know it's the final season and everything, so all bets are off. The premiere started with the off-screen death of Tara. Since then we've also seen Alcide get shot in the head, Maxine Fortenberry's heart get ripped out, and both Eric and Bill have their death warrants signed by Hep-V. At this point, it really seems like Sookie might be the only character standing by the time the credits roll on Episode 10.

But I have one request: Let Laffy live! And no, it's not just because Sookie will need a sassy gay friend to help her cope with the deaths of all her loved ones. It's because the poor guy deserves to live. I could summarize all the ways True Blood has mistreated Lafayette Reynolds over the course of seven years, but maybe I should just let him speak for himself. In the latest episode, when Jessica challenged him about whether or not James was the right man for Lafayette, he responded:

If he is, what's so fucking unimaginable about that, Red? Huh? Everybody else in this fucking town is falling in love, and getting engaged, and having babies. Has it ever fucking occurred to you that Lafayette, that queen that makes all you white heterosexuals laugh and feel good about yourselves — has it fucking ever occurred to you that maybe I want a piece of happiness, too?

That's about as meta as True Blood gets. For six and a half years, Tara's cousin has pretty much been relegated to funny sidekick and given no plots or conflicts or desires of his own. The only storyline that centered around him ended with Lafayette stabbing his own boyfriend to death while under a spell. I mean, damn — that's cold, writers.

Now it seems as though Lafayette may finally have found true love again in the form of James Kent, Jessica's bisexual vampire paramour. He's a mere five episodes away from being able to skip off happily into the sunset... which has me more worried than ever about his fate. Why do I have a creeping feeling that the writers about to kill off Lafayette?

There's nothing that spells doom for characters as consistently as happiness. The most gut-wrenching time to kill someone is right when they've finally achieved that goal they've been working towards. Tara died right when she'd finally reconciled with her estranged mother. Alcide died shortly after finally getting with the woman of his dreams. And now that Lafayette has found true love, I'm afraid that the writers will think it's the perfect moment to send him to Bon Temps' overcrowded cemetery.

He's dead in the books.

Viewers who haven't read Charlaine Harris' Southern Vampire Mysteries thirteen-volume series may not know this, but Lafayette's literary counterpart has actually been dead for quite some time. The second book, Living Dead In Dallas actually opened with Sookie finding Lafayette murdered in the backseat of Andy's car. The second book. The TV show emulated that scene as the Season 1 cliffhanger, but viewers found out in Season 2 that the body actually belonged to Miss Jeanette, and Lafayette was alive but chained up in the Fangtasia dungeon. I'm thankful that the writers chose to keep Lafayette around as long as they did. But I'm also afraid that, as the series enters its final five episodes, the writers might feel it's high time to rectify that massive change they made to Harris' novels.

He's not a vampire.

But really, the most important factor is that he's not a vampire who's romantically entangled with Sookie Stackhouse. We all know that, no matter how many entertaining secondary characters or diversionary subplots we've enjoyed, True Blood has always been about the central love triangle — at least in the writers' eyes. (As evidenced by their continued insistence that Bill is a viable match for the faerie.) It wouldn't surprise me if, at this rate, the series finale finds only Sookie, Bill, and Eric left standing for an ultimate-love-triangle-showdown. I'm already feeling concerned about the fates of such beloved characters as Jessica and Sam. And if they're not safe, then there's probably nothing standing between Lafayette and certain doom.

Then again, maybe I'm just paranoid and gun-shy after so many shocking deaths this season. Maybe the writers will surprise us all and give Lafayette the happy ending he deserves. I'll drink to that.