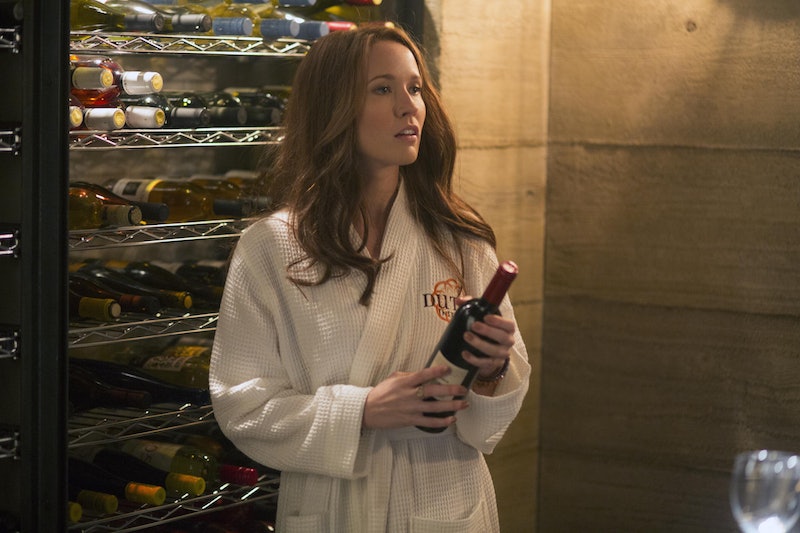 Is there a character on True Blood that anyone wants to see die as badly as Sarah Newlin? Of course, there are characters who are more insufferable or unnecessary (cough, Violet, cough) — but one of the things on the top of our Final Season Wish List is a gruesome end for the egomaniacal vampire hater. She's the kind of villain who's fun to hate, so if True Blood weren't ending this season, we'd want her to stick around for more shenanigans. But the fact remains that the show will be over in five more episodes, so we might as well see her go out in a blaze of southern-accented, doe-eyed, black-hearted glory. Right, y'all?

But what could be a satisfying enough ending for such a despicable character? It wouldn't be enough for her to simply be shot or stabbed or poisoned or strangled or have her neck snapped. (We've thought about this a lot.) Oh no. The former Mrs. Steve Newlin needs an epically painful death befitting her ignominious life. Who will have the honors? What form will her demise take? We've thought through all of the permutations and come up with a few satisfying options. Are you paying attention, writers?

Sure, a wooden stake through the heart is how you're supposed to kill a vampire. But it sure as heck will work for a human, too. Especially one with a heart as rotten as Sarah's. Let Jason be the one to drive the sharpened stick through her chest — he needs to make up for letting her go at the end of last season. Plus, it would have awesome echoes of their Fellowship Of The Sun role-playing five seasons ago (above).

It seems all the men romantically involved with Sarah lately end up with their heads parted from their bodies. First Bill literally bit off Governor Truman Burrell's head. Then the yakuza decapitated Guru Dutta with a sword. Now it's Sarah's turn. Have Truman's daughter Willa do the deed to avenge herself against the harpy who helped turn her father into a crazy zealot.

At the end of last season, Sarah tried to kill a large group of our favorite vampires imprisoned in Burrell's camp by letting them meet the sun. Fortunately, they were saved by Warlow's daywalking blood. But somebody who was in that room — Jessica or Pam, for instance — should retaliate against their would-be murderer by doing the same to her. Naturally, the sun isn't as deadly to humans as it is to vamps, but putting her under a giant magnifying glass or cranking up a tanning bed to max power should do the trick.

Sarah is responsible for infecting the Tru Blood stock with Hep-V, which is the entire reason roving bands of sick vampires have been killing everyone this season, and why Eric and Bill are soon going to be dead. (Maybe.) And since Hep-V is basically a glorified STD, someone should just infect Sarah with a particularly virulent strain of syphilis and see how she likes it. Let Eric do the dirty deed, since he's so desperate for revenge after Sarah infected his sister Nora. Sure, it'll probably take longer for Sarah to die from syphilis, but all Eric has to do is strap her down, deny her treatment, and watch as the paralysis, blindness, dementia, and death occur.

Or maybe such a prolonged death isn't good enough for hot-tempered Eric. He probably wants to see her dead, stat. When Nora succumbed to the Hep-V, she dissolved into a pile of goo in his bereaved arms. All Eric has to do to reduce Sarah to a similar state is dip her entire body in a giant vat of acid. Just make sure she stays down long enough, or he'll have a green-skinned, cackling anarchist on his hands.

Stiletto to the noggin.

Of course, what death for Sarah could possibly be more cathartic than watching someone drive a sharp object into her skull? Ever since we watched her kill Yakimono's Ms. Suzuki with her own high heel, we've been fervently praying for the newly-converted Buddhist to meet a similar fate. With the Japanese corporation's yakuza after her, surely it's only a matter of time before one of them drives a katana through her brain. And I think we could all say "namaste" to that!