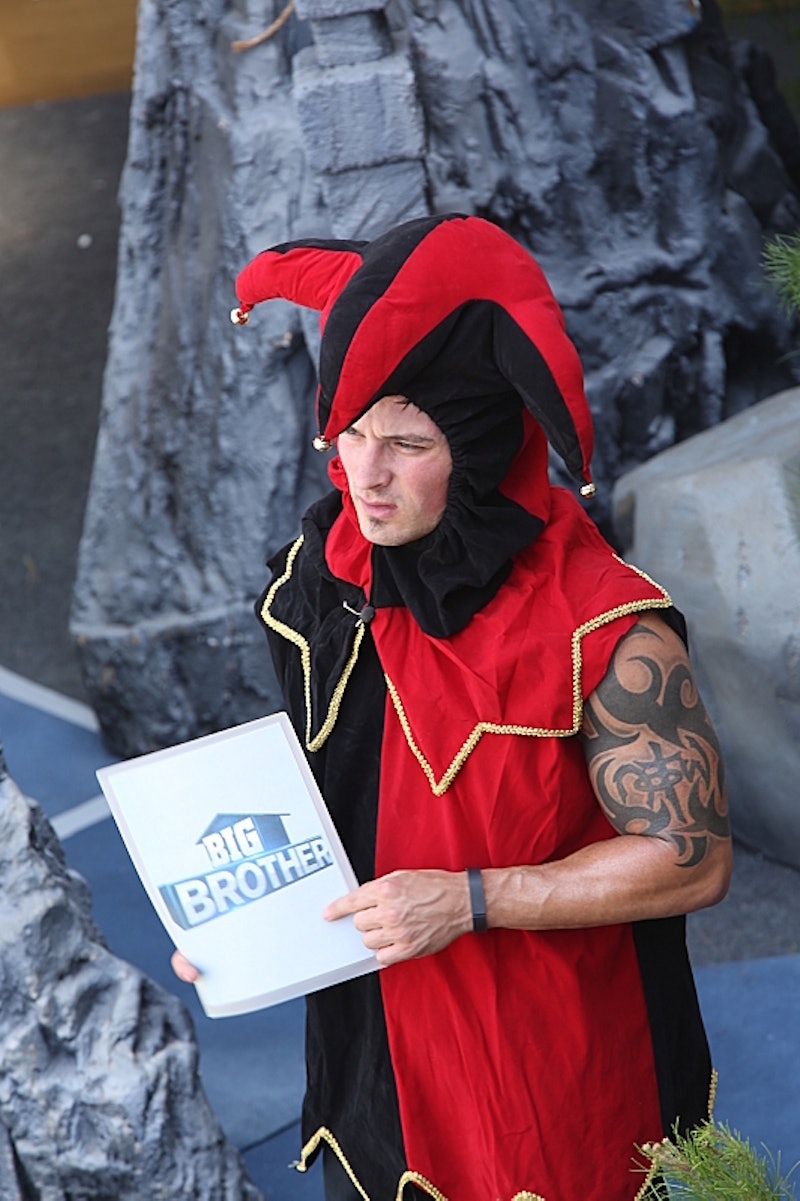 Since Devin Shepherd was ousted from the Big Brother house last week, it seemed the show was in dire need of another juiced-up narcissist to take his place, and Caleb Reynolds has apparently decided he's the man for the job. Caleb's obsession with fellow houseguest Amber Borzotra has always been cringe-inducing, but over the past few episodes it's become less funny and more alarming to watch.

On July 21 Caleb was caught on the livefeed cameras kissing Amber goodnight on the forehead after she had already fallen asleep. Amber has made it abundantly clear that she's just not that into him, but Caleb doesn't seem to be letting a little thing like Amber's wants and needs get in the way of their (entirely one-sided, purely fictional) relationship. Now that it's been established Caleb isn't above making unwanted contact with his dream girl, just how far does he have to go before CBS takes him out of the game?

Unfortunately, sexual harassment is rarely an uncomplicated, black-and-white situation. It should be enough that Caleb is making Amber uncomfortable, but for CBS to step in, Amber would most likely have to come to producers and lodge a complaint herself. That's a move that could easily destroy her game, especially if the powers that be decide Caleb hasn't done enough to warrant his removal.

Jocasta is unimpressed by sexism in the workplace.

In the real world, Amber might be able to speak to her higher-ups anonymously, but that's impossible inside the Big Brother house. Of course we'd like Amber to feel safe reporting harassment without fear of retribution — but it should also be her decision when enough is enough. If she feels that a chance at half a million dollars is worth living with Caleb for a few more months, that's entirely her call. It's also a decision that a lot of women are forced to confront in real life when they're harassed at work. Is the potential loss of their job, their chance at promotion, or the respect of their coworkers worth filing a complaint? From the outside it's easy to say that Amber needs to be more forceful with Caleb, but let's not make his behavior her responsibility.

So what actually qualifies as illegal harassment? According the U.S. Equal Employment Opportunity Commission

"Unwelcome sexual advances, requests for sexual favors, and other verbal or physical conduct of a sexual nature constitutes sexual harassment when submission to or rejection of this conduct explicitly or implicitly affects an individual's employment, unreasonably interferes with an individual's work performance or creates an intimidating, hostile or offensive work environment."

At this point, Caleb's actions seems to be juuuuust toeing the line between awful and legitimately illegal. His advances are more romantic than sexual (constantly badgering Amber to go on a date, as opposed to "requests for sexual favors.") But he's certainly creating an "an intimidating, hostile or offensive work environment." And his controlling behavior (ordering the other guys to stay away from her, trying to get her voted out when she defied him, planning their future together without her input, acting overly-possessive) reads like the classic abuser resumé.

This is the face of delusion.

CBS has made the decision to kick houseguests out four times before, three for the other contestants' safety. Justin Sebik was forced to leave Season 2 after threatening to beat and rape multiple houseguests, and finally holding a knife to Krista Stegall's throat.

In Season 4 Scott Weintraub verbally intimidated his castmates and escalated to throwing furniture before producers dismissed him from the house.

And in Season 14 Willie Hantz provoked Joe Arvin into a physical fight, resulting in his expulsion.

So far, Caleb's behavior isn't on the level of those three. But it's easy to see how he could get there, especially if Amber decides she doesn't want to deal with his harassment anymore and finally blows up at him.

One thing's for sure: if Gina Marie is publicly supporting your creepy imaginary relationship, it's a sign you've already gone too far.

More like this
What’s New On Netflix: 'Stranger Things' & 'Somebody Feed Phil' Return
By Arya Roshanian
What’s New On Netflix: A Victoria Justice Rom-Com & The Return Of David Letterman
By Arya Roshanian
Ashe & Taylor From 'Temptation Island' Crashed And Burned
By Kadin Burnett
Two 'Temptation Island' Singles Dropped A Bombshell About Lascelles At The Reunion
By Brad Witter
Get Even More From Bustle — Sign Up For The Newsletter