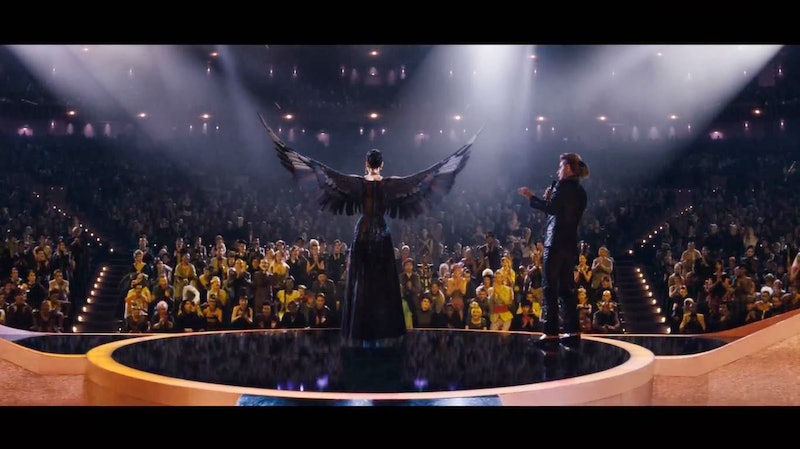 Every time new Mockingjay Part 1 promotional material comes out, the fandom complains that there isn't enough Katniss. Three trailers came out before we even saw a glimpse of Jennifer Lawrence's character and she wasn't in any of the recently released character posters either. But Lionsgate's decision to keep Katniss under wraps isn't an oversight, it's actually keeping the movies in line with the books.

The marketing techniques for Mockingjay Part 1 have been pretty clever this whole time. Lionsgate has taken their ideas directly from the pages of Suzanne Collins' novel. First they released a pro-Capitol video which featured Peeta standing alongside the president, seemingly in solidarity with his action. Then in another smart trailer Lionsgate had the rebel group of District 13 break into the Capitol propoganda video with a message of their own. Tech-savvy Beetee crashed the control panel and hastily informed us that "the Mockingjay lives."

Throughout these months leading up to the movie's release in November, audiences have been able to step into the unique role of actial Panem citizen. We didn't just see a standard trailer, we saw propos straight out of the pages of the novel. It's allowed us to imagine that we're more than just an observer of a fictional story—we're apart of its landscape.

But while that's probably not lost on the dedicated following of the series, fans have been blinded a bit by the lack of Katniss in promotional material.

It's true that there has been next to no Katniss in any of the trailers of movie posters/stills, but I think that's a deliberate decision on behalf of the film's marketing team. They are playing right alongside what actually happens in the book which is that Katniss does not easily accept the Mockingjay role; she doesn't just fork over her image to be used as a symbol of revolution. In the months after her second arena stint she spends a great deal of her time in the hospital with severe cognitive trauma. In those months she would not have been out filming anti-Capitol commercials.

Even when she starts to get her wits about her once more, she doesn't ascend to the Mockingjay role as willingly as the leaders of District 13 had hoped. In Chapter five Katniss describes this tricky situation as such:

Another power player who has decided to use me as a piece in her games, although things never seem to go according to plan ... The rebels ensnaring me in the metal claw that lifted me from the arena, designating me to be their Mockingjay, and then having to recover from the shock that I might not want the wings. And now Coin, with her fistful of precious nukes and her well-oiled machine of a district, finding it's even harder to groom a Mockingjay than to catch one.

Katniss rejected the role of revolution leader for a long time before Disctrict 13 finally got her on their side. Lionsgate isn't withholding Katniss from us to be obnoxious; they're simply continuing their marketing plan of sticking close to the book. For that reason, instead of being mad or making jokes about it, the fans should be glad that Lionsgate cares enough about the film's content to play by the rules of the universe Suzanne Collins created.

We may not get as much Katniss in the time leading up to the movie, but when we do it will be because it was finally right to do so according to the novels, and that's all a book fan can ever ask.

More like this
What Song Does Eddie Play in 'Stranger Things'? Metallica’s “Master Of Puppets” Ignites The Season 4 Finale
By Alyssa Lapid
At 14, Jenny Han Wrote Rom-Coms About Her Friends & Fan Mail To Leo DiCaprio
By Alyssa Lapid
The 'Spiderhead' Movie Ending Is Nothing Like The Short Story It’s Based On
By Morgan Leigh Davies
Everything You Need To Know About The 'Knives Out' Sequel
By Grace Wehniainen
Get Even More From Bustle — Sign Up For The Newsletter