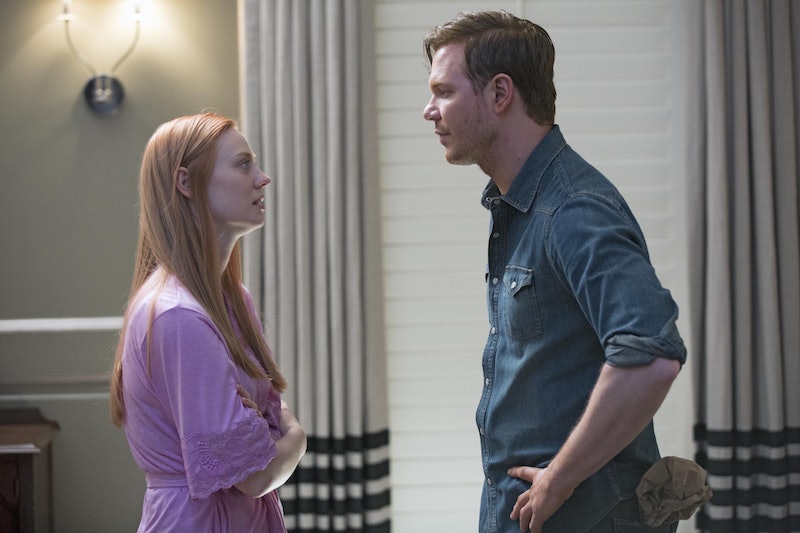 Did anyone else forget how much they missed Jessica and Hoyt’s relationship? Because that is one True Blood 'shipping pair I was not expecting to root for anymore. But here I am, practically giddy over their recent reunion. After learning about the death of his mother, Mrs. Fortenberry, Hoyt returned once again to Bon Temps (post-glamouring) with absolutely no recollection of his rocky history with either Jess or Jason. And while a part of me found that kind of sad since he’s not only forgotten the bad times, but the good times as well, another part of me found it surprisingly refreshing. It’s like hitting the reset button on two of the most important (and ironically most screwed up) relationships of Hoyt’s life.

Instead of looking at Jess with betrayal and disappointment, he saw a pretty girl who he rescued from Jason’s crazy vampire girlfriend. Without all of that resentment getting in the way, their connection was instant and just as sweet as when they first met (because, to Hoyt, this was the first time they met). After everything that's happened, I just assumed Jason and Jessica were going to be each other’s end game, but now I’m not so sure. What they have seems to be blossoming into a beautiful friendship, but Hoyt seems to be where Jessica’s heart truly lies.

How do I know these two belong together? I’m so glad you asked…

His Instinct Is To Protect Her

Not only did Hoyt save Jess from meeting the True Death this season, but when he discovered that her maker, Bill, is currently dying from Hep-V, he dropped off a bag of his own Hep-V-free blood at her house as a way to show his sympathy. He doesn't even know her and yet he still had the urge to make her feel better. Clearly, that's supposed to mean something. His girlfriend Bridget may be holding him close for the time being, but it's Jessica who's caught his eye… and possibly his heart.

They Were Each Other's First

And by first, I of course mean… you know. Sex! (This is True Blood, after all.) There's something very special about your first time with someone, which is a connection Jess and Hoyt will always share. Granted, the first person you sleep with isn't always the person you should end up with, but I believe this duo has what it takes to make it work. Their love was not a fling or an infatuation. It was the real deal, and if given the chance they could definitely be that way again.

Back when they first started dating, Jess was just a newly turned baby vamp overwhelmed by all of her vampire urges. She wasn't ready to settle down into a serious relationship with anyone yet. But now, she's had some time to grow (emotionally, not literally, since vampires can't age) and realize just how much she's missed having Hoyt around.

It Would Allow Jason & Bridget To Be Together

Though it would be a real dick move for Jason to hone in on another one of his best friend's girlfriends, if Jess and Hoyt were to get back together it would leave Bridget available to be with Jason. As you can see, he already appears to be pretty attracted to her (surprise, surprise). Plus, we know that she, like Jason, is interested in having a family, whereas Hoyt seemed to shrug off the idea when she brought it up. I have to admit, it's a little surprising to hear that Hoyt doesn't want kids since he seems like such a family man, but if that's really the case then it would work out perfectly. Because guess who can't have kids? Vampires. And who just so happens to be a vampire? Jessica. See? These two are simply meant to be.