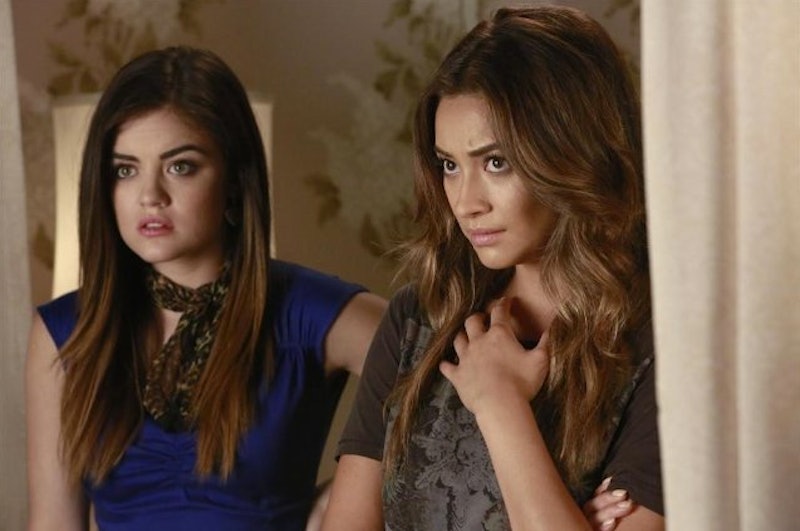 Okay, I was teasing last week's episode for having a cheesy title ("A Dark Ali"), but "No One Here Can Love Me Or Understand Me" is at least a thousand times worse. I mean, can't you just see it scratched onto the cover a 12 year-old goth-wannabe's binder? And it's quite the mouthful, practically taking up all 140 characters of a tweet.

Title whinings aside, a lot happened this week. Multiple metaphorical bombs were dropped — we found out that the Hastings sisters may have accidentally colluded on the murder of Bethany Young, heavy hints were dropped that Alison is 'A', and we finally figured out why Caleb's been acting so weird (not having watched Ravenswood, I was pretty indifferent about that plotline).

With all that went down last night, we're well set-up for next week's summer finale (no!), and the fashion of the episode was suitably on point — I feel like I'm always saying this, but we got some of our best looks of the season. Spencer wore an absolutely gorgeous mixed-material dress with fluttery sleeves, and Aria wore an ah-mazing faux-leather skater skirt decorated with lightning bolts — here she is, pictured with the show's costume designer, Mandi Line:

Emily had a good week, too: It was one of the rare episodes where she wore a dress, and quite an adorable one at that.

The high point of the episode's style came in the form of a movie screening: Aria, M&M (the cutesy couple name for Mona and Michael), and Mr. Montgomery all went to watch an old movie, where people, awesomely enough, dressed on-theme.

Who wore it better?

Oh, and I almost forgot: Guess who else was there? Paige McCullers, out on a hot date.

I think she has to get the MVP this week for that off-the-shoulder showstopper (and epically voluminous hair). Emily would certainly seem to agree: