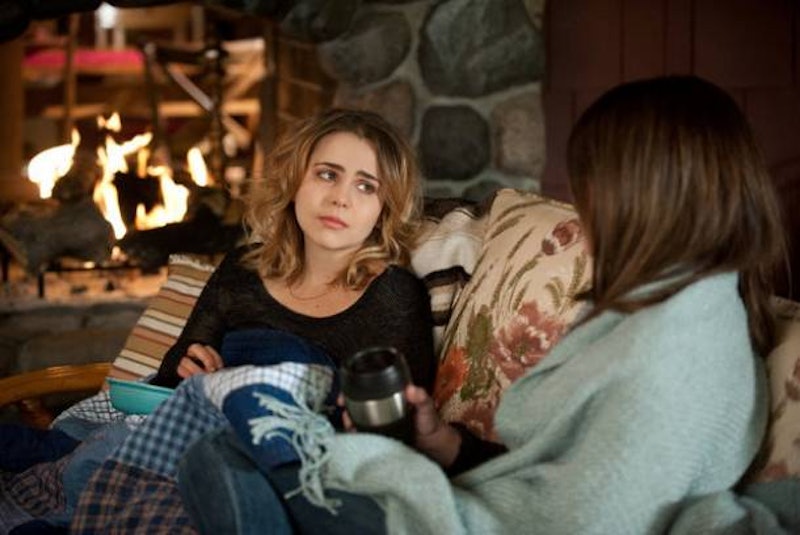 When watching the Emmys, one expects surprises from the shows actually nominated, not the snubbed shows that aren't even on the air. Yet during Monday night's broadcast of the awards show, a commercial for the upcoming season of Parenthood had more shocks than anything that occurred in the actual ceremony — including the possible reveal of a pregnant Amber.

It all happened so fast. The promo opened with some predictable, sweet shots of the Bravermans smiling and hugging; Sarah posing with Hank, Crosby bonding with Adam, Drew getting advice from Zeek. Then, suddenly, there was an image of an ultrasound machine — and Amber, in a hospital-like bed, looking in that general direction. As Parenthood fans will recall, last season ended with the Braverman daughter going to buy a pregnancy test, soon after her short-lived reunion with Ryan. Did this promo just confirm the biggest cliffhanger of the show?!

But because one major surprise wasn't enough, the commercial had to end with an image of Zeek, smiling and waving. As Parenthood's showrunner has promised a huge, unprecedented event during the show's final season, many fans have wondered if that is the death of the family patriarch; seeing him look so happy, right as the clip faded out, certainly didn't bode well for his fate.

Unfortunately, Parenthood fans will have to wait another several weeks to find out; the show comes back on the air Sept. 25. Until then, get your freak-outs about possible pregnancies and potential deaths out of the way — when the show rolls around next month, the only emotion you'll want to feel is that wonderfully odd mix of heartbreak and joy that only Parenthood can make you feel.