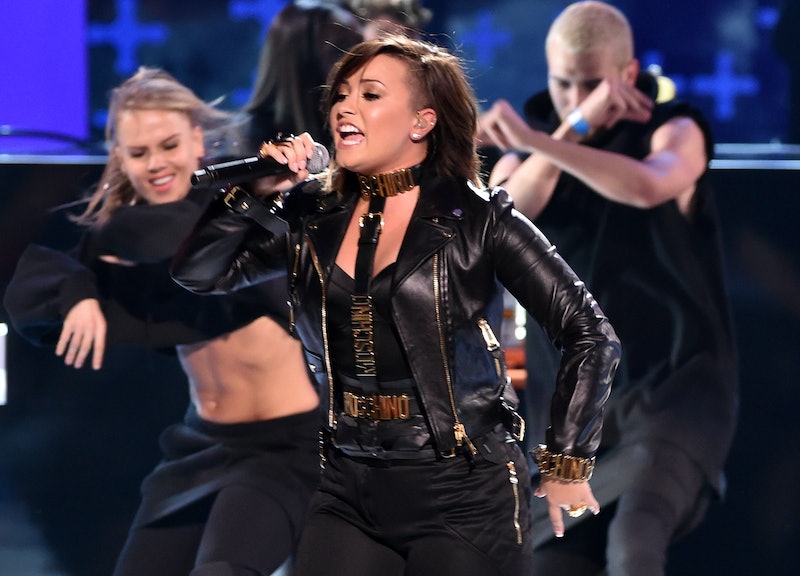 "The Kardashians" and "positive body image" are not often ideas expressed in the same sentence, but Demi Lovato seems believe that the Kardash Klan has done great things in the field of self-acceptance. In a recent interview, Demi Lovato said that Kim Kardashian is a role model when it comes to body image and credits her with changing this generation's beauty standards for the better. Amidst a barrage of rather negatively charged social media posts from Kim Kardashian about her current shape, I can't help but wonder: has Demi Lovato been on the Internet lately?

On Thursday, Lovato contemplated her struggle with her own body image issues with the Access Hollywood. The "Heart Attack" singer has famously battled bulimia, and said that she's reached a place where she loves her body and feels "beautiful." She mused on beauty standards set by pop stars of the late '90s/early aughts, remembering that those stick-thin frames set unrealistic goals that encouraged unhealthy habits for people who didn't have that body type. She gives kudos to more hourglass-shaped women in the public eye like Kardashian and Beyoncé for flipping that script. Lovato explained,

I really credit women like Beyoncé and Kim Kardashian. [They] completely revolutionized our generation's view ... of what beautiful is.You can think whatever you want about the Kardashians, but they really did help tons of women feel comfortable in their own skin, and I like to carry that message on.

I don't think that Lovato is entirely wrong, but I can't help finding a bit of fault in touting Kardashian with encouraging women to love their bodies. Kardashian has been broadcasting some rather problematic messages on her Instagram lately, lamenting her current shape in a storm of self-shaming hashtags. Case in point, the caption of the an old photo she posted of herself which reads, "#SkinnyDays #OnTheTreadmillRightNow." Then there was the another photo from a 2009 red carpet appearance that Kardashian posted in July. She captioned this one: "#FBF ughh I am 20 lbs lighter here! This was just 5 years ago! Ok, I'm going back on my grind. I gotta get back here!"

There was also the time that Kylie Jenner tried to get her to enjoy an Italian meal, heaven forbid!

Kardashian is not exactly a beacon of self-acceptance. With the reality star's habit of complaining about her size over social media, it seems that she's only confident when her body is as close to the current ultra-slim cultural ideal as it can be.

Since giving birth to baby North, Kardashian has been very open about trying to losing her baby weight. Sure, the priority should be set on feeling healthy and secure in your shape, and sometimes carrying a little more weight than you're used to can make that difficult. On a human level, I understand Kardashian feeling insecure. And yes, as Lovato points out, Kardashian's body has increased the visibility of figures beyond the stick thin in pop culture. Great, snaps for that. However, we need to remember that most stars still don't look like the Kardashians or Beyonce. The stick-thin look is still the most widely seen.

I think Lovato fails to recognize that Kim Kardashian is being hypocritical. The reality star purports herself to be a proponent of curves, but doubles down by agonizing over the temptation of pasta in 140 characters. Whether or not young women look at bodies like Kardashian's and see themselves in her, she's setting a negative example here. Her idea seems to be "Love your curves, but remain hyper-aware of them because once they become too full of gnocchi and take up two much space, you've got a problem."

Lovato has come to be a true body image role model herself, and she seems to understand the damaging nature of being too hard on oneself, while Kim Kardashian sends messages about just that out into the world. That's why this acknowledgment doesn't sit well with me. The best way for Kardashian's visibility in pop culture to help other young women truly feel confident in their bodies if she is confident in her own.