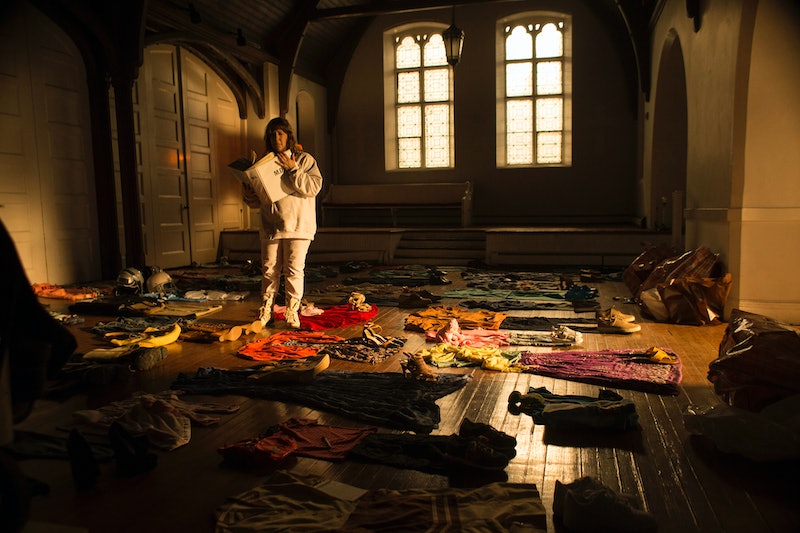 There are so many unanswered questions on HBO's The Leftovers: Where did The Departed go? Is Kevin crazy? What's up with that guy who hugs people? Who's the weird loner going around shooting dogs? But few questions are as universally confounding as: What the heck is the Guilty Remnant up to? All season they've literally lurked in the background, stalking the citizens of Mapleton, New York, chain-smoking cigarettes, and staying completely and frustratingly silent.

But even if the GR member won't talk, we know they're up to something. In the fourth episode of the season, the Guilty Remnant snuck into people's houses while most of the town was at the dance and all the family photos of The Departed. Then, in the eighth episode, GR leader Patti was seen compiling outfits in rows on the floor of Reverend Jamison's repossessed church, crosschecking with some sort of thick binder. Later in that same episode, a large delivery was brought to the same church, consisting of several large, wrapped packages. The promos for the Season 1 finale make it clear that whatever the GR is planning will come into play in a major way: there's blood, there's flames, and there's lots of dramatic music. But what exactly is the plan?

They're going to "return" The Departed.

The most prevalent theory about the delivery brought to the church is that it was the fake corpses available for people to buy so they can have a funeral for their vanished loved ones. We saw one of the life-like replicas in the sixth episode, when Nora met a salesman of the so-called "Loved Ones" (which go for $40,000 a pop). The pictures, the clothes, the fake corpses: it seems clear that the GR is planning on recreating the bodies of the Mapletonians who disappeared three years ago. The real question is, what will they do with these replicas?

We already know the cult is good at breaking and entering. Perhaps they plan on reversing the Sudden Departure and "returning" all of The Departed to their homes. In this scenario, the flames glimpsed in the promo would be a distraction to get the Mapletonians out of their homes long enough to get in and place the "Loved Ones." This plan would certainly jive with their manifesto of never letting people forget about what happened on October 13. People would have a hard time forgetting this perverse, intrusive act.

They're going to burn The Departed.

But perhaps giving The Departed back to their families is too kind of a motive for the creepy cult. Sure, it would be a shock at first, but at least these people would then have a physical manifestation of their loved ones to have a proper funeral with. It would be much more in line with the GR's deceptively violent ways (remember how they stoned one of their own members to death?) if they set up all of Mapleton's Departed in a display in the center of town... and then burned them.

After all, one of the main tenets of the Guilty Remnant is that they don't put much stock in human life. That's the reason they smoke like chimneys: "We don't expect to be around for very long." They think the Sudden Departure was the beginning of the end, and burning the effigies would certainly be a powerful way to convey the idea that, in this new post-Departure world, nothing matters anymore — not even the those whom Mapleton has fondly started remembering as "Heroes."

They're going to burn themselves.

Then again, maybe all this with the fake corpses is just misdirection, and the Guilty Remnant's ultimate plan is much bigger. We already know they don't care about their own health (the cigarettes) and are willing to die for their cause (Gladys); so what if their ultimate act of defiance against a world that's trying so hard to move past the Sudden Departure is to just leave it all behind... by burning themselves alive? At about the 35-second mark in the promo, you can glimpse what appears to be a member of the Guilty Remnant standing amidst the flames. He could be a victim... or he could be a willing self-sacrifice.

They're going to be raided.

But it could be that the flames glimpsed in the promo have nothing to do with the Guilty Remnant's plan. No matter what happens (replacing the corpses, burning the effigies, self-immolation), perhaps the fire is caused by an outside source. It could be one of the antagonistic brick-throwers who has finally had enough of the GR's shenanigans. Or, and this seems more likely, it's the ATF, who raided Holy Wayne's compound at the beginning of the second episode, and who offered to get rid of the pesky GR for Chief Garvey. Kevin declined, but maybe the government agency decided to take matters into its own hands and eliminate all cult threats throughout the country. A systematic slaughtering of the Guilty Remnant members would be quite the gut-punch to leave us hanging between seasons, especially since young Jill has just decided to join her mother in the cult.