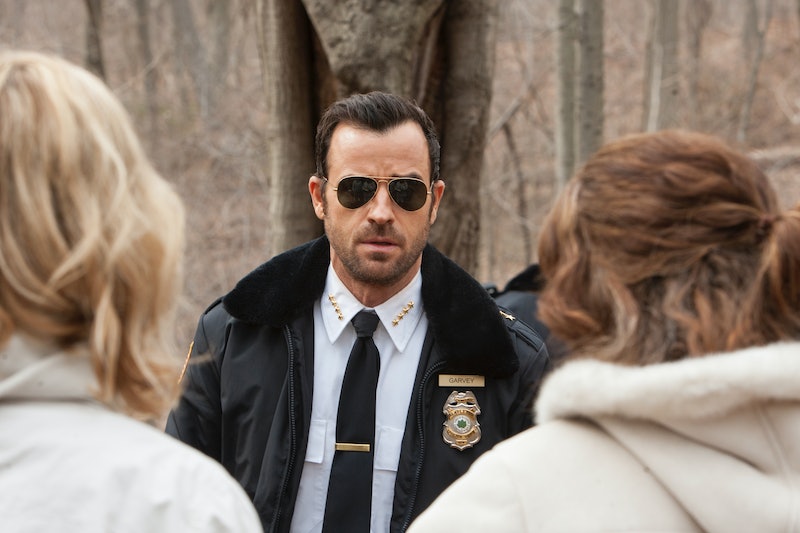 With only three episodes left in Season 1 of HBO's The Leftovers, things are getting crazy. Literally. (As if they weren't already.) Kevin Garvey seems a little crazy. As the citizens of Mapleton are wound tighter and tighter, events seem to be heading towards an explosive conclusion. Thankfully, we know Season 1 won't end with the literal Apocalypse or everyone else in the world getting Raptured, since The Leftovers was just renewed for Season 2. But that certainly doesn't mean that everything will be hunky dory — especially if the increasingly insane Garvey men have anything to say about it.

We've known from the very first episode that not everything is right in the mind of Mapleton's Chief of Police. In only seven episodes, Kevin Garvey, Jr. has already contended with nightmarish dreams, hallucinatory deer, vanishing bagels, missing dry cleaning, and memory-wiping blackouts — not to mention constantly dealing with the stress of a runaway son, a delinquent daughter, a brainwashed wife, an institutionalized father, and a town on the brink of chaos. But is he actually going crazy like his father, or has the world itself become unglued post-Sudden Departure? And for that matter, is Kevin, Sr. actually crazy — or could he be a misunderstood prophet?

When Nora attended a work conference in NYC, one of the speakers was heard lecturing about a phenomenon called "the prophet's dilemma" — or, as it's officially called, Post-Departure Delusion Disorder. Here's what he had to say:

For most of humankind's existence, certain individuals have come forth as self-professed interpreters of the world's mysteries. But what happens when those conversations with God go wrong? Following a catastrophic event or circumstance, let alone one that defies scientific explanation, the incidents of prophetic delusion rise dramatically. And this isn't just megalomaniacs who make the news for a week. This is happening to our friends, our neighbors, our own families. This belief that a higher power is speaking to us — whether through dreams or signs, even voices — is a powerful coping mechanism. And, if left unchecked, a very dangerous one.

That pretty much sums up the Garvey men in a nutshell, doesn't it? So what does this mean? Are Kevin's hallucinations merely a coping mechanism? Are Kevin, Sr.'s voices just a delusion? Is one of them receiving signs from a higher power? Both of them, even?

Right now, all the signs are pointing to them just being crazy. In Tom Perrotta's novel that provides the basis for HBO's show, there is absolutely nothing fantastical about the world other than the fact that two percent of the population disappeared one day. Having Sheriff Garvey turn out to be a literal prophet would be quite the departure (pun intended) from the very grounded reality of the source material. Also, there's the fact that Kevin, Sr. started hearing voices well before the Sudden Departure. Of course, it's possible that he started receiving some sort of advance signal before the Departure occurred, but then that raises the question: Why?

Perhaps the most compelling argument about the legitimacy of the Garveys' status as prophets is the sheer number of characters on the show who feel in touch with a higher power. There's both the Kevins. There's Reverend Matt Jamison, who believes God sent him signs through pigeons. There's Holy Wayne, who believes he has the power to absorb people's pain. And there's the Guilty Remnant leader Patti Levin — we don't actually know her true motivations since she doesn't talk much, but as the leader of a cult, it's quite possible she believes she's receiving some sort of divine instructions.

These people can't possibly all be prophets, can they? Isn't it just the "incidents of prophetic delusion" the speaker was warning us about? What would the real twist be: That Sheriff Garvey is actually in contact with God? Or for him to gradually be convinced that he's a true prophet, only to find out at that he's simply insane, like he always feared?

It's unclear at this point which direction showrunner Damon Lindelof will take with these seemingly divinely-inspired hallucinations. Will he debunk them and keep the show grounded in reality? Or will he surprise us all by turning the show into a full-fledged fantasy? It's hard to predict what lies inside Lindelof's secretive mind, but it's fun to look for easter eggs he may have planted for us along the way. Perhaps there's a clue in the signs the protesters were holding outside the conference Nora attended. They referred to a Bible verse, Acts 20:31, which reads:

So be on your guard! Remember that for three years I never stopped warning each of you night and day with tears.

Interesting... The Leftovers takes place three years after the Sudden Departure, and there have definitely been plenty of tears in the interim. So that means the Garveys are actually prophets, heralding some new crisis about to befall the human race, right? Not so fast. Check out the two verses that precede the one above:

I know that after I leave, savage wolves will come in among you and will not spare the flock. Even from your own number men will arise and distort the truth in order to draw away disciples after them.

The warning mentioned in Acts 20:31 wasn't referring to the apocalypse — it was warning people against following false prophets in the apparent absence of the divine. Most people in the world of The Leftovers seem to have a hard time finding God after 140 million people vanished in the blink of an eye... So they turn away from Him to follow the likes of Wayne and Patti instead. If anything, this Biblical reference seems like Lindelof's way of cautioning us to not be taken in by the lunatic ramblings of the charismatic Kevins. They're not prophets; they're "savage wolves" in sheep's clothing whose only purpose is to "distort the truth."

So, in the question of "prophet" vs. "crazy," when it comes to the Garvey men, we're leaning towards "crazy." At least for now.