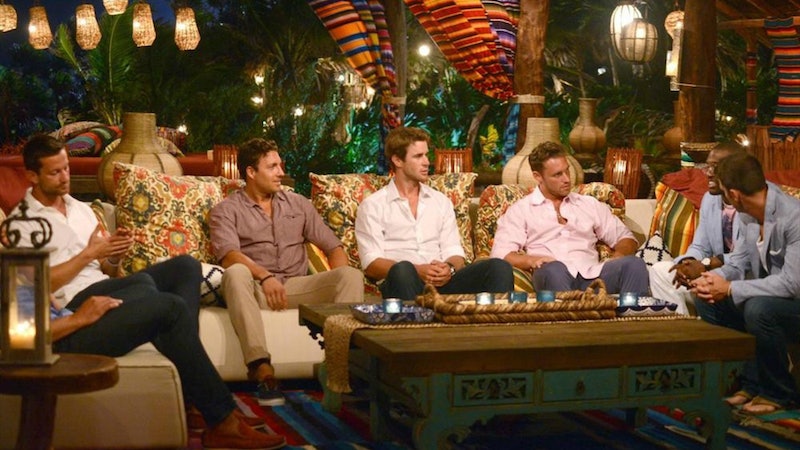 In just one week Bachelor in Paradise will be over, and though Chris Harrison promises the finale will be dramatic, we'll still be left wondering what happens in the end. Unlike The Bachelor, The Bachelorette, or even Bachelor Pad, there is no live Bachelor in Paradise reunion special slated to air. Meaning we don't get to know whether or not these couples actually make it, or break up. That's a shame, considering the show has sparked a lot of budding relationships. Harrison is totally right when he told TVGuide, "If there was ever a show that needed [a reunion], it’s this one."

He says the execs are "in heavy talks" to make a catch-up episode happen, but at this point the series is just going to end next Monday without letting us know where the couples stand today. Come on, ABC, you can't string us along for six weeks and then not let us know how the happy (or not-so-happy) pairs are doing!

But even if we don't end up getting a much-needed reunion, fortunately we have our imaginations and a history of Bachelor live shows to draw upon for inspiration. ABC may not give us a look at what's next, but here's how I think things would go down if there was a live recap:

MARCUS WILL PROPOSE TO LACY

Bachelor Pad 3 also ended with a few couples and during the live finale Tony Pieper ended up proposing to Blakeley Shea. They didn't make it down the aisle, but the moment brought in a lot of viewers. It's likely ABC sprung for the ring and encouraged Tony to do it to help with ratings, so maybe producers will suggest the same to Marcus. Rumor has it he is engaged to Lacy Faddoul, and who is he to turn down a free ring?

ASHLEE WILL FREAK OUT

On Sean's season, AshLee Frazier was a little overwhelming, but it was on the Women Tell All that her true colors were revealed. She accused Sean of leading her on and being a player. With her history of live show meltdowns, I'm sure at a reunion she'd find a way to get upset about something. Whether it's Clare's sexual history or Graham never going on a date with her, AshLee loves to whine.

JESSE WILL APOLOGIZE AND/OR STAND BY WHAT HE DID

Showing contrition on live shows is a longstanding tradition. Even the worst villains of the show have done it. Will Jesse see the mistakes he's made and apologize to those he's insulted? Reunion trend says yes, but the fact that he's still retweeting Tasos "Taco" jokes says maybe he's as immature as he appears.

Bachelor in Paradise has potential for a live makeup or breakup in an homage to Jason Mesnick. Perhaps Dylan and Elise will rekindle their love. Maybe Graham will finally dump AshLee. The possibilities are endless.

It wouldn't be a live show if a majority of the cast wasn't ganging up on someone. This season had a number of villains from douchey Jesse and slut-shaming AshLee, to Kalon McMahon who didn't really do anything this time but is still getting hammered about his "baggage" comment. Mob mentality is sure to come out on live TV and the group will mercilessly attack the one they deem most deserving of their harsh words.

Nothing better than some bloopers to send us on our way and to tide us over while we wait for "America's sexiest farmer" Chris Soules' season to start.

I do hope Bachelor in Paradise ends up having a reunion, but in case they don't at least we got a look at what one could have looked like.