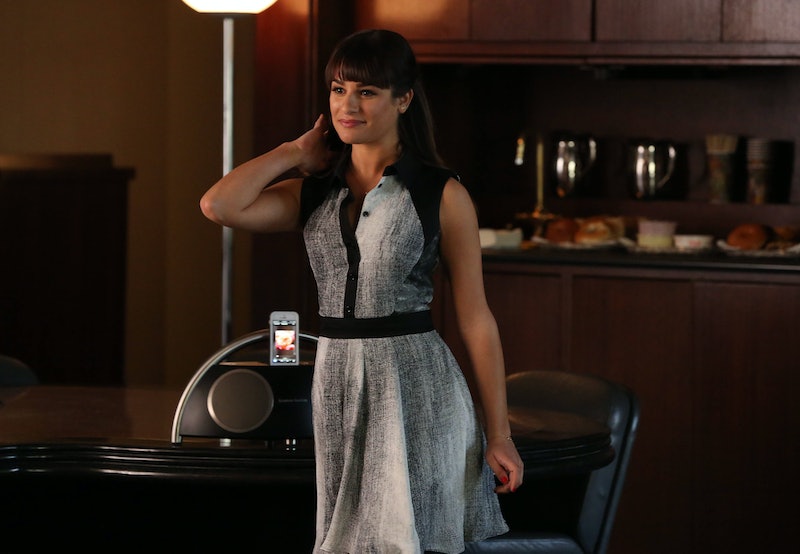 Those indefatigable Glee kids might never stop believin', but the show itself will, in fact, stop: after 121 episodes, over 600 musical numbers, and innumerable slushy facials, the polarizing show choir dramedy is coming to an end. A shortened Glee Season 6 will be the series' final showing, as the writers do their best to bring their scattered show back to its roots in a mere thirteen episodes. It's a challenge not unlike the one faced by the True Blood writers this year (another show beloved in its first few seasons and acclaimed for its racially and sexually diverse cast that devolved into a ridiculous mess in its later years). As long as Glee doesn't spend half of its series finale devoted to a wedding that absolutely nobody was clamoring for in the first place, fans should be satisfied.

Due to its curtailed nature, Season 6 of Glee is being held until midseason, which means a January or February premiere. The first day of filming for the season was this Wednesday, which means they have plenty of time to get the episodes in good shape before 2015 rolls around. And because the cast and crew of Glee are among the most notoriously loose-lipped people in Hollywood, we already have a plethora of Season 6 spoilers to get excited about/complain about/generally obsess over for the next four or five months until the season premiere.

Here's what we know so far:

Rachel is a Lima loser.

We knew pretty early on that Season 6 would return the show to McKinley High School, and focus on Rachel trying to revitalize the glee club. What we didn't know was what drove her there. Last we saw of Ms. Gold-Star Berry, she was off to Los Angeles to pursue a shiny television career. Turns out, her TV show (titled "That's So Rachel") is a "humiliating failure" and, having burned her bridges on Broadway and flopped in Hollywood, Rachel returns to Ohio in disgrace, per TVLine. That's pretty dark for a show that started off with a bunch of misfits trying desperately to avoid being "Lima losers."

When Rachel arrives back in her hometown, she discovers not only that her dads are divorcing, but that Principal Sue Sylvester has banished all arts programs from McKinley, so she makes it her mission to bring back the glee club at all costs.

Getting to know you.

Hand-in-hand with the resurfacing of the high school comes the casting of a new crop of students. After Marley & Co failed to make a splash in Seasons 4-5, it seems the writers have completely given up on them and are introducing fresh(er) blood instead. According to TVLine, the new kids on the Glee block will be:

Jane: "Righteous, ambitious and unconventionally pretty, she’s funny because she doesn’t have much of a sense of humor."

Roderick: "Chubby and shy with a voice like Otis Redding, his looks don’t match with his talent."

In a surprise move, Max Adler (who portrays Kurt's tormentor Dave Karofsky) is returning for the final season. Though the closeted football player and his former target of abuse patched things up after Karofsky attempted suicide in Season 3, I have a feeling things are going to get decidedly less cordial between the two characters again... since Karofsky will return to Glee, perhaps as the love interest of one Blaine Anderson. Yes, you read that correctly. Season 6 begins with a six-month time jump, and in that time Blaine and Kurt, the show's longest standing relationship, apparently called off their engagement. That sound you just heard was millions of shipper hearts shattering in grief.

Oh, and Blaine's a Lima loser, too.

But wait — what's Blaine doing back in Lima wooing Dave, when he should be studying at NYADA in NYC? Apparently he's joining Rachel in Lima loser-dom. According to MjsBigBlog, after Blaine's breakup with Kurt, his grades slipped so much he was cut from the performing arts program and had to move back home with his parents, where he's working as the coach of his old Dalton Academy Warblers. Yeesh.

But Blaine won't be the only one stuck in a Lima rut. Kurt will take time off from NYADA to help Rachel restart the New Directions (as an "intern"). Sam has started a job assistant coaching the McKinley football team with Coach Beiste. Sue is still principal. Figgins has left his janitorial position and is now working as a barista at the Lima Bean. And though Will has also left McKinley, he's still nearby: coaching rival Vocal Adrenaline at Carmel High, as it turns out.

(Meanwhile, Artie is still in film school and Mercedes is still on tour with Santana and Brittany.)

Episode 1 of Season 6 is named after one of the original songs written for Glee, and one that accurately sums up the status of so many of the characters: "Loser Like Me." The full song list for the premiere is already leaked, and it contains one major bombshell:

No, you're not dreaming. Yes, Glee is doing Frozen. Yes, Lea Michele will be singing it. Yes, I'm freaking out, too. "Let It Go" will only be the second Disney tune performed on the show (after Lady And The Tramp's "Bella Notte" in the Season 2 finale); since the giant corporation also owns rival network ABC, they've been tight-fisted with the rights to their songs. Something tells me Glee's connection with Idina Menzel (who plays Rachel's mom Shelby) must have something to do with how they managed to snag the most iconic Disney song since "The Circle Of Life."

Our excitement over this news almost makes up for the remarkable lack of diversity in the singers on that list. Yes, I'm thrilled about a Rachel/Blaine Broadway duet. Yes, I'm pumped that the show's finally tackling Alanis. But what about Kurt? Sam? Will? Any of the new characters? Look — I love Lea Michele's voice as much as the next person, but if I have to listen to three new Rachel solos every week while hearing nothing from Santana, I'm gonna have some serious words for Ryan Murphy.