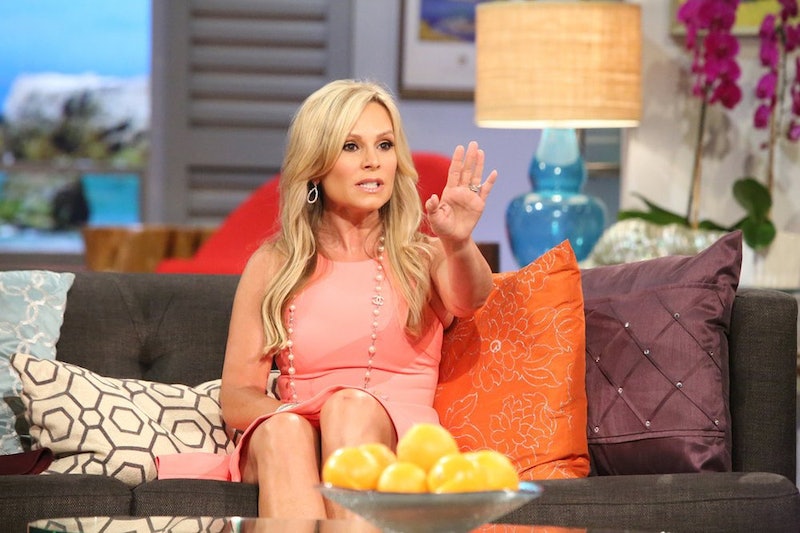 Okay, as a certified (not certified) Real Housewives of Orange County authority (yes, authority), I'm pronouncing this season DEAD. Of course I'll be watching for whatever secrets are revealed in the "Secrets Revealed" episode, but what was once an outstanding season of the show that brought Bravo into the reality TV pantheon has become a shallow, boring, mess. And the number one reason why is Tamra "Tammy Sue" Barney/Judge, which makes the renewed rumors that Tamra is being fired from RHOC a godsend. Please, for once, let the rumors be true. It's already a time of miracles — Aviva Drescher got fired and Ramona Singer demoted from Real Housewives of New York on the same day.

Real Housewives of Orange County started Season 9 with a million and one bangs. It ended the season on Heather's terrible bangs. Yeah, yeah, that's a lame joke. But it was also a really lame finale, with the same conflicts from the first half of the season dominating most of the reunion, including things that were deemed too boring to be in the actual show. Those just made for a bunch of those weird, sepia-toned flashbacks mostly filled with Tamra gossiping and then lying about said gossiping.

Tamra has always been a big part of the conflict of the show. Without her, most of these ladies would probably never get agitated enough to actually get into real fights. But this year, she couldn't keep straight whose side she was on, what she was doing, or what she had said behind different people's backs. She claimed she never said the Dubrows wanted to "take the Beadors down," then backtracked and said that she can't remember if she did or didn't.

Honestly, through, at this point we see that same thing on every single franchise — and RHOC can't hold a candle to Atlanta or even Beverly Hills in terms of gossip. RHONY is getting ahead of the curve by cutting out the most obviously producer-manipulated hijinks and instead refocusing on the cast who have the most interesting things actually going on in their lives and seem to be actual friends — reminiscent of what the show was like in the first few seasons. While RHOC is a totally different show with a more suburban milieu, everything that happened between Shannon, Heather, and Vicki was infinitely more interesting than Tamra's fake baby drama or her constant lying. Lizzie, who also was a little dull this year, at least made up for it by refusing to play along with all of Tamra's shifting allegiances.

The rumors that Tamra has been kicked off of the show don't have much new information — they just say that producers are tired of what she brings to the table. However, unlike before, when revealing behind-the-scenes info got a lot of people talking, Tamra hasn't issued a denial this time. Hopefully, her silence speaks for her, and we won't have to deal with her ruining another great season of Real Housewives of Orange County. Shannon, Vicki, Heather, and mayyyybe even Lizzie can take this one.