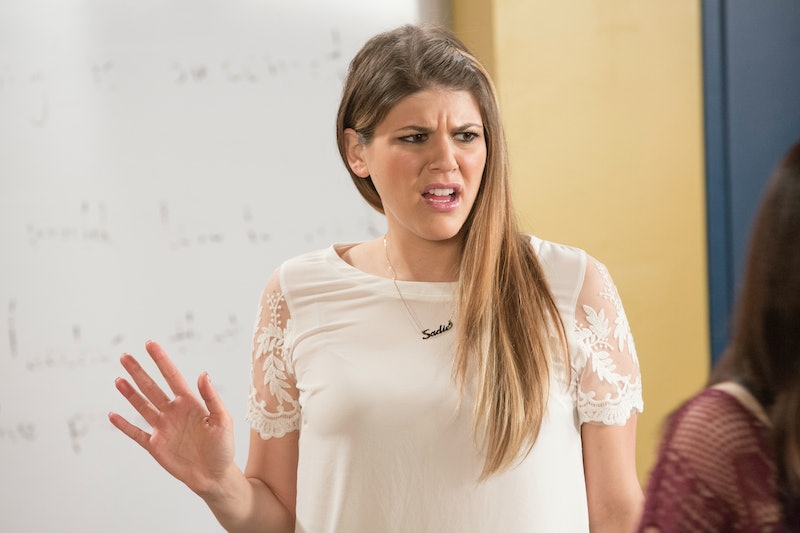 At its core, MTV's dramedy Awkward is about growing up — and getting by. When we first met Jenna, she was a, well, awkward, insecure girl who worried that her crush on popular guy Matty would never amount to more than a not-so-hot summer hookup in a janitor's closet. Jenna still leads a highly uncomfortable life, but now that she is a senior in high school, she's learned to do so with just a touch more grace. And since Awkward's Jenna will go to college (she's graduating rather soon), how the heck is the high school series going to continue to be a thing? Will Awkward end after Season 4?

Luckily, we don't have to worry about that right this second. The Season 4 finale of Awk ward concluded with the senior spring break trip (not to mention a lot of drama) which was a strategic move on the part of the writers: They have at least one more season to go before they have to start packing the kids up for their respective colleges. While we've already seen Jenna visit her potential future college (where she promptly fell for a college guy, because of course she did) we don't necessarily have to follow her to college to continue Awkward. Here's how the show could skip over the college thing entirely.

Do A Time Jump, A La One Tree Hill

One Tree Hill knew that transitions from high school to college were tricky for a television show that revolved around the lives of people who were connected by their hometown. Instead of hopping from one character's post-college plans to the other, they decided to skip over those pesky four years entirely. All of the characters returned to their hometown after four years of doing their own thing — it gave everyone the perfect excuse to reconnect and drudge up old drama. If Matty and Jenna aren't together by graduation, they could reunite after a four year time jump.

The O.C.'s final season — the one that was noticeably missing Marissa — did follow Summer to college, but kept the rest of the gang in Orange County. It worked because, as The O.C. reminds us, you come home from college quite a bit in your freshman year — Thanksgiving, Christmas break, and even random "I miss real food" trips are common. And thank God we didn't have to see Seth, Ryan, Taylor and Summer all live together in the Brown dorms.

Borrow From The Degrassi Format

Degrassi attempted to do The O.C. thing after their initial crop of students graduated, but quickly realized that Degrassi was never really about the individual characters: It was about the high school experience. As sad as it was to see Paige, Ellie, and Marco leave the Degrassi universe, moving on with new students kept the show fresh. Awkward isn't a high school show in the same way that Degrassi is — it's more about Jenna's life than a general high school experience — but the show could still introduce us to new, uber-awkward characters who will take over the show... possibly with Jenna Hamilton as their spirit guide.