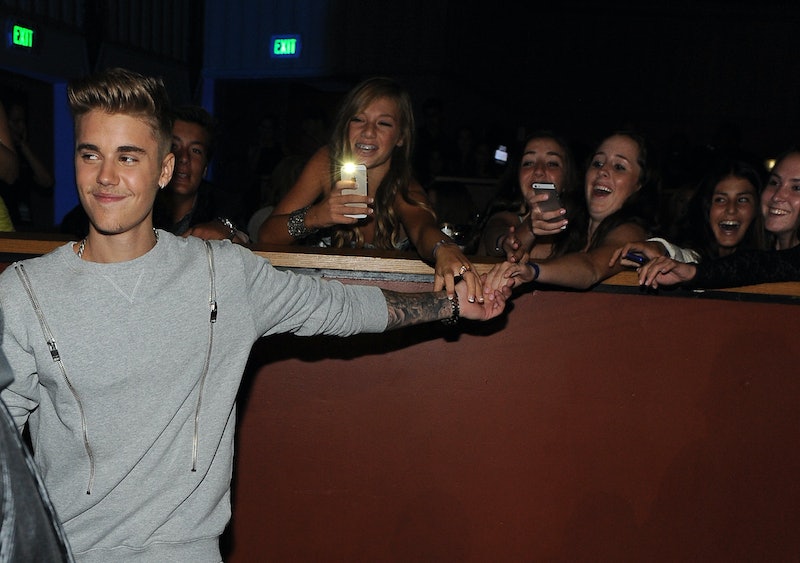 Welp, there's some unexpectedly good news for Justin Bieber's legal record. I guess every J-14 idol miscreant has his day. Just kidding! Justin Bieber always has his day! He's Justin Bieber. As for his latest triumph, Justin Bieber's assault charges were dropped on Monday morning in a Toronto Court, following the prosecutor's realization that there was "no reasonable prospect of conviction." Bieber has a speckled legal past and has escaped trouble before numerous times. That's what believing in yourself and a payroll of the world's best lawyers can get you!

Back in January, Bieber was arrested on assault charges by a limo driver who allegedly picked up the singer and a group of friends at a Toronto nightclub. The driver claimed that the "Boyfriend" singer lashed out physically and hit him in the back of the head six times after a verbal tussle. It's impossible to tell what actually occurred without unbiased witnesses or surveillance footage, so the withdrawal of these charges may have to do with a lack of hard evidence. Also, I'm guessing that Justin Bieber being a non-normal doesn't hurt.

This isn't the first time that Justin has escaped recrimination because the burden of proof was too difficult. In June, the Biebs was charged with felony robbery when a woman who was trying to take a picture of him accused him of trying to steal her phone. Authorities reportedly questioned several bystanders and couldn't verify her story, so the charges were withdrawn.

Plus, let's not forget the infamous Miami drag racing episode. Bieber was charged with a DUI, resisting arrest, and driving with a suspended license in Miami earlier this year. While the local cops accused the singer of driving drunk, he didn't test over the legal limit for alcohol consumption but tested positive for marijuana. Although the authorities were proven to be wrong in a few of their claims, Bieber accepted a plea bargain and pled guilty to dangerous driving. According to the Mirror, Bieber paid an undisclosed fine, and signed up for anger management classes in exchange for the additional charges being dropped.

Though the prosecution may have had to rest when it comes to Bieber, his history of apparent aggression and recklessness shouldn't be discounted. First, there's the pesky matter of outstanding charges of assault and dangerous driving after he reportedly crashed an ATV into a minivan just under a week ago. And how could we forget the great Bieber-Bloom fight of 2014 when Bieber allegedly verbally baited Orlando Bloom by insulting his ex-wife Miranda Kerr, to which Bloom responded by reportedly punching the Biebs. While this instance didn't land Bieber back in the court room, it doesn't exactly make him look like a mensch.

But for now, every small victory deserves to be celebrated. As long as the celebration is responsible, involves no disturbing of the peace, and doesn't involve vehicles in any way, shape, or form. That seems to be where he runs into trouble.