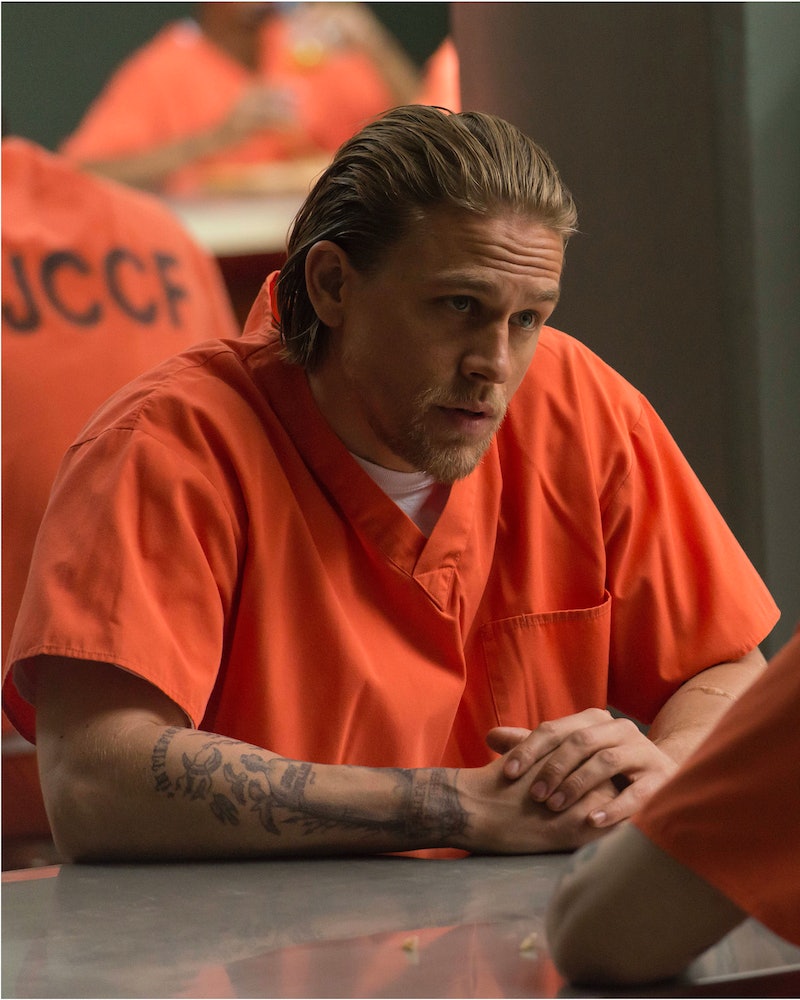 The boys of SAMCRO are back. Unless you happened to have been stabbed in the back of the head with a meat fork in the past year, this should not be new information. But just in case, you're going to want to make sure you're completely caught up before heading into Tuesday's Sons of Anarchy Season 7 premiere. We're down to the final eight episodes ever, so it's critical you don't miss a moment. Here's how you can watch the show online and on demand.

In last season's finale, the six years of tension between Jax's wife, Tara, and his mother, Gemma, finally came to a shocking conclusion when Gemma murdered her daughter-in-law in a rather grisly method: that's right, the meat fork to the head. Jax still doesn't know his mother was the one behind the murder, but you can bet your Harley it won't be long before he discovers what went down. The truth has a way of getting out in the Teller-Morrow family.

Unfortunately, that means Maggie Siff (who played Tara) won't be appearing in Season 7, but Sons of Anarchy has brought in some... interesting new cast members to fill the void. Marilyn Manson will play the imprisoned leader of a Neo-Nazi gang (what is up with this show and Nazis?); Malcolm-Jamal Warner (who I know you remember from The Cosby Show) will appear as a member of the black motorcycle gang the Grim Bastards; and Lea Michelle is stepping outside high school to play a single mother and truck stop waitress. Do you see now why you have to find as many ways as possible to watch this season?!

If you have a cable subscription and can already watch SOA on your TV, chances are you'll be able to use FX's on-demand site to watch episodes whenever you want. You just have to register and give the name of your provider. The only down side is that, like most on-demand sites, you can't use it to watch new episodes in real time, so stay off Twitter for at least a few hours until the most recent episode becomes available.

If you're too cheap to pay for cable (or you just live in the 21st century and don't have a TV anymore), FX still has you covered. All of the network's shows are available to watch online for free the day after they air. Yes, you'll have to sit through some commercials, but that's a small sacrifice to pay to stay up on Sons. Just don't wait around forever: episodes are taken down after about two months.

FX episodes are all available for purchase on iTunes the day after they air, for $2.99 a pop, or between $20 and $40 for the entire season (depending on number of episodes and episode length). The advantage to this option is that, as with FXNow, you can watch Sons on any device. The disadvantage is that you may flash back to your middle school days of buying individual songs using iTunes giftcards your distant relatives got you for your birthday because they didn't really have any idea what your actual interests were. Too real?

So there you have it, the myriad ways you can watch Jax, Gemma, Juice, and all your other favorite gun-smuggling criminals this fall. The final season of Sons of Anarchy starts on Tuesday, September 9 at 10 p.m.