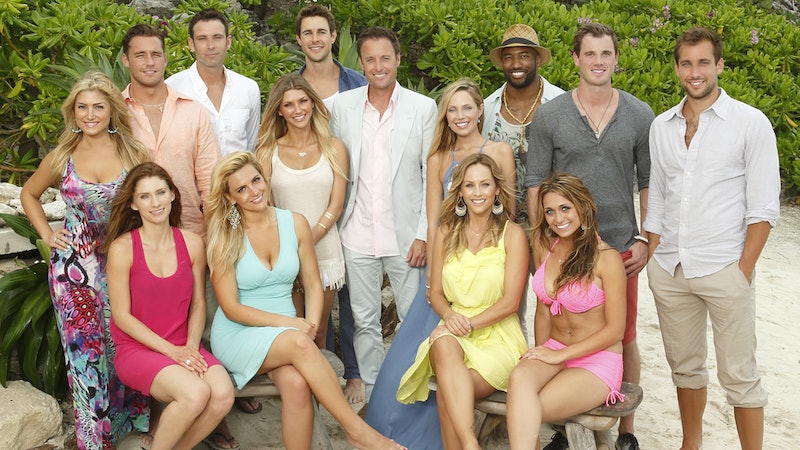 The finale of hasn't even aired yet, and ABC has already renewed Bachelor in Paradise for a second season. They must really think Monday's drama with the former Bachelor couples is going to bring in a big audience. But more likely it's the combination of viewership and relationship success that has ABC coming back for more. After all, at the end of their debut season (spoiler alert!) they already have Lacy and Marcus the rumored engaged couple and this show was filmed in a much shorter time span than the regular Bachelor or Bachelorette.

And though an engagement is great news if you're into true reality TV love, a second season gives ABC a chance to work out some of the kinks of this year's show. Being that it was the premiere season, they couldn't get everything perfectly the first time around. Even The Bachelor and Bachelorette have changed a lot to since their first seasons. Once upon a time, the most exotic place they traveled to was Arizona and the women got to hand out the Fantasy Suit cards if they liked the Bachelor enough.

So what should Bachelor in Paradise do differently next year? Here are eight ideas.

DON'T LET ALL THE PAIRINGS CEMENT IN THE FIRST WEEK

The biggest flaw with the show is that basically all the couples were hammered down in weeks one or two. That means that all the people who showed up in the later episodes had way less people to pair up with. More than once, someone would come in excited to meet someone only to find out they were already "claimed." New people coming in week to week is fun, but if the show wants real romance, they should think about bringing everyone in during week one and watching the pairings progress from there so everyone has an equal shot.

CHANGE UP THE COUPLES

If ABC does want to stick with the new people every week format, then they should consider removing half the group each week (like all the women or all the men or a at least a portion of them) and letting the new people meet all their options. If couples choose to stay faithful to their partners during that time, great! If not, there will be plenty of drama.

LET PEOPLE BE SAFE THE WEEK THEY WALK IN

It's not really fair to thrust a guy or girl into the game and then expect them to make a connection overnight that keeps them safe. On the weeks that the guys have the roses, the show should introduce new guys and vice versa to give them a bit of a fighting chance.

AshLee Frazier decided to slut shame Clare Crawley one day and did so while not realizing she was being filmed. I want to see more of the actual personalities of these people so the show should get more hidden cameras to catch people when they think it's safe to trash talk.

The thing I miss the most about Bachelor Pad was watching the contestants participate in ridiculous games to try to win roses. The same should apply to Bachelor in Paradise because watching reality stars climb through a mud pit or try to complete a trivia challenge is priceless.

Bless the genius who decided to make it look like Clare was having a heart to heart with a raccoon. I love that little critter. He should be the new Bachelor mascot and he should definitely come back for Season 2.

BRING IN AN AWESOME CAST

ABC should stick to the big names to really keep things interesting. I don't care if Jamie what's-her-name or Christie somebody finds love if I don't even remember what season they're from.

The show's loyal fans have been watching silently for ages, but no more! They should put one rose in the viewers hands to let them either save someone who deserves a second chance (like Brooks did) or to kick someone off who is terrible (like Jesse).

Now that would make the show more interesting to watch.