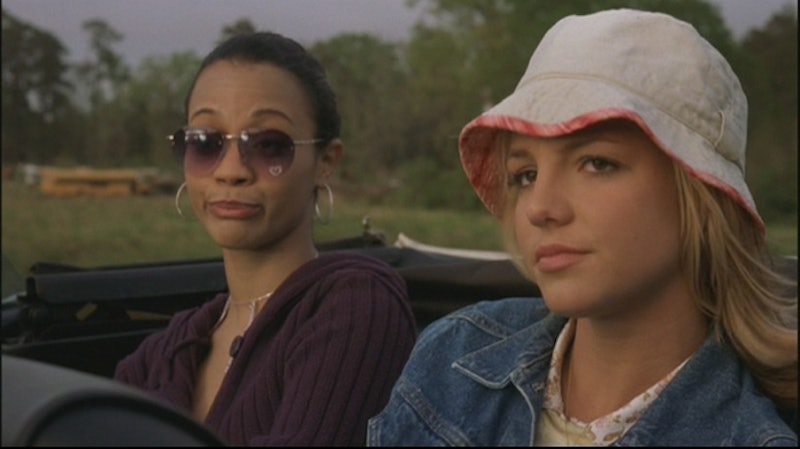 Remember Britney Spears' song "Not A Girl, Not Yet A Woman?" It was the ballad from the beloved film Crossroads. Sure, the movie only got 3/10 stars on IMDb, but I'd argue it's a classic. I may have even cried at the ending. (Shhh! Don't judge me.) Anyway, on Monday, Britney Spears and Zoe Saldana had a reunion... sort of. Tying into the movie's anthem, let's just say it was "Not A Reunion, Not Yet A Sequel." OK, that analogy doesn't quite fit, but here's what happened. The former co-stars were photographed standing near each other in an airport, but unfortunately, no one knows if they actually spoke during their trip from LA to NYC.

Back in August, Brit-Brit gave a shoutout to her Crossroads cast mates on Twitter. She joked about the possibility of a Crossroads 2 aka the best idea ever. So I imagine if they did notice each other on the airplane, they probably caught up and had a lovely chat. They likely would've discussed everything from Spears' (possible) new single to Saldana's pregnancy. They could even swap parenting tips. Plus, they could discuss their Ice Bucket Challenge videos. Maybe they even FaceTimed with the missing member of their trio, Taryn Manning.

Here's the photo of Saldana and Spears "together" in the airport:

It totally counts as a reunion! In honor of this moment that was clearly fate at work, I've rounded up nine of Crossroads' most memorable moments. Let's take a trip back to 2002:

Before she starred on Zoey 101, Jamie Lynn Spears got her start playing the adolescent Britney in Crossroads. This flashback is super presh.

This is where the characters first reunite in the movie and dig up their past hopes and dreams.

Justin Long, aka Britney's lab partner, tries to convince her of all the reasons they should lose their virginity to each other on prom night. Despite his pleading, it doesn't happen. This scene is awk, but amusing.

Britney singing in her room

I wonder if this is actually how Britney gets ready in the morning. I mean, I wouldn't doubt it. Cool cowboy hat.

And singing in the club

I don't really love rock 'n roll, but I loved when Britney sang about loving rock 'n roll because back then my childhood self considered her to be the best singer around.

This was a pivotal part of the movie. Britney wasn't a girl anymore, but she wasn't a woman yet either. This is a struggle we all related to at one point, right?

Road trip with a killer?

The highlight of this clip may be Zoe's lion t-shirt paired with cat pajama pants. Oh, and there's this great Britney quote: "I'm on a road trip with a killer and you're telling me not to be upset?" (Spoiler alert: He is not a killer. No worries!)

Yikes, "trailer trash sleaze" is quite an insult. The girls' personalities clash in this scene, but luckily Britney takes charge and breaks up the fight.

Yup, more singing. This is perfect because they sang "Bye Bye Bye," which was especially relevant at the time because she and Justin Timberlake were the cutest couple in the world. Ahh, the nostalgia!