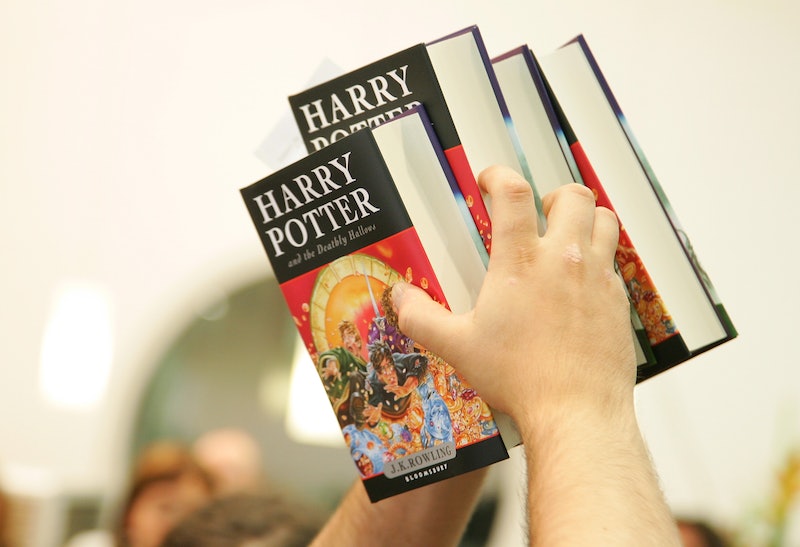 Facebook doesn't just comb through our "About Me" sections — it pays attention to our memes, too. Even when the memes concern books. You know, the Anti-Internet. For about a year, a Facebook status has been going around that reads something like, "List 10 books that have stayed with you in some way. Don't take more than a few minutes, and don't think too hard. They do not have to be the 'right' books or great works of literature, just ones that have affected you in some way." You'd fill out your 10 books, tag 10 friends, and go on your merry way, having shown the world just how well-read you are.

Researchers Lada Adamic and Pinkesh Patel collected more than 130,000 of the bookish status updates that appeared during the last two weeks of August 2014 and combed them for similarities. Within the sample they used, women posted the status three times more than men, and the average age was 37. These are the books that stuck with us, and it turns out, they're not very surprising. Well, most of them aren't very surprising. Here's what the list reveals.

Harry Potter has changed the world.

The Harry Potter series came out a solid #1. Keep in mind that the first Harry Potter book was released in 1997, when today's 37-year-olds were 20 years old, significantly older than the book's 11-year-old hero. Looks like the only way to be truly indie in this world is to not have read Harry Potter.

The books we remember are often classic childhood or YA books.

The list is speckled with the type of powerful books you often read — or were assigned — as a child. To Kill a Mocking Bird came in at No. 2, and other childhood classics included The Catcher in the Rye, Little Women, A Wrinkle in Time, Anne of Green Gables, Lord of the Flies, The Giving Tree, Where the Red Fern Grows, The Secret Garden, Little House on the Prairie, The Perks of Being a Wallflower, Are You There God? It's Me, Margaret, Charlotte's Web, Where the Sidewalk Ends, and Where the Wild Things Are. Many of these are books are typically read during the angsty teen years (I'm looking at you, Catcher), which is a good time for a book to really get its hooks in a reader.

We're decently feminist when it comes to our ultimate favorites.

But over all, we still favor guys.

Though the top of the list may have looked equal, the entire list was unbalanced: Only 26 of the top 100 books were written by women. It's possible, though, that this doesn't speak to a bias in readers so much as a bias in the canon. It's clear from the list that we favor classic books for their staying power, and the canon of classic literature has been dominated by men for ages.

The way to immortality and riches is to write a really successful YA series.

Because we're addicted to them. Out of the top 10 books, four of them were YA series: Harry Potter, Lord of the Rings, The Hunger Games, and The Chronicles of Narnia. (Sure, all of these can and have been read by adults, too — which is exactly the point.)

By now, maybe you've figured out that this list is just a slightly-less-intellectual version of any 100 Books You Must Read Before You Die list. From Pride and Prejudice (No. 5) to 1984 (No. 12), this is a list that will make your English professor very, very happy.

There were a few hilarious outliers on the list, like The Eye of the World by Robert Jordan, which came in at a strong No. 27 and which I have never heard of. Even better, a book called Lamb: The Gospel According to Biff, Christ's Childhood Pal by Christopher Moore came in at No. 44, beating out Slaughterhouse-Five, The Secret Garden, and Brave New World, among others. I'm sorry: What?!

Here are the people we like twice as much.

The researchers looked not just at the individual lists, but at the similarities between lists, and found that the overlap between people's lists and their tagged friends' lists was only 0.4 books on average. That means that if you tagged your mom, your best friend, and your arch-nemesis, changes are you'd only have half of Pride and Prejudice in common with any of them. But that's still more than the overlap between strangers, which was a mere 0.1 books per list. (The researchers note that this is an underestimate: Their system only used an average of 5.3 books per list, since they were searching for the 500 most common titles. So maybe you and your arch-nemesis share an affinity for obscure zines, after all.)